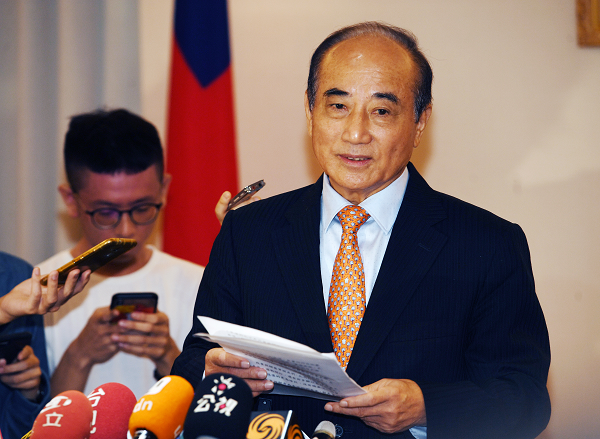 TAIPEI (Taiwan News) – Kuomintang (KMT) politician and former President of Taiwan’s Legislative Yuan, Wang Jin-Pyng (王金平), has announced that he is removing his name from the list of contenders for the KMT presidential nomination.

Wang made the announcement on Thursday (June 6) after meeting with the party’s primary coordination committee, in which he indicated that he would still serve the party by motivating KMT supporters at the local level across Taiwan, rather than at the head of his own presidential campaign.

Expressing a sense of resignation, and a commitment to the party over his own personal aspirations, Wang made his announcement before the media on Thursday morning.

He revealed that he was asked by the primary committee to bow out of the competition, and that he had agreed to their request, calling the primaries “strange.”

In his statement before the press, Wang declared that the KMT is on the verge of a major transformation, noting the victory of potential presidential candidate, Han Kuo-yu (韓國瑜), in the Kaohsiung mayoral race last November as evidence.

Wang noted that the KMT still faces many problems internally, with regard to differing views regarding the primary, the presidential election, and future of the country. However, Wang expressed his belief that the problems could be solved slowly, and that the KMT would be a strengthened, united force going into the general election.

Wang also noted that neither the “green camp” nor the “white camp,” in reference to the Democratic Progressive Party (DPP) and Taipei Mayor Ko Wen-je (柯文哲), have formally launched their campaigns to challenge the “blue camp” of the KMT.

Reporters asked Wang if there was a specific candidate that he was planning to endorse for the nomination. Wang replied “not right now,” but indicated that he would likely endorse someone at a later date.

Wang was also asked if he was considering leaving the party, or if he might be asked to leave the party, to which he replied “it is still too early” to say.

Additionally, while Han Kuo-yu never officially declared his participation in the primary, his supporters have registered his candidacy on his behalf. Reports indicate he has been “drafted” by the party leadership to compete with the others.

Alternately, Han may be directly designated as the party’s nominee, if the other candidates can be persuaded to bow out like Wang.

The KMT’s primary was originally scheduled for late May, but has been delayed until July 6-14, with the official nomination announcement scheduled for July 28, reports CNA.