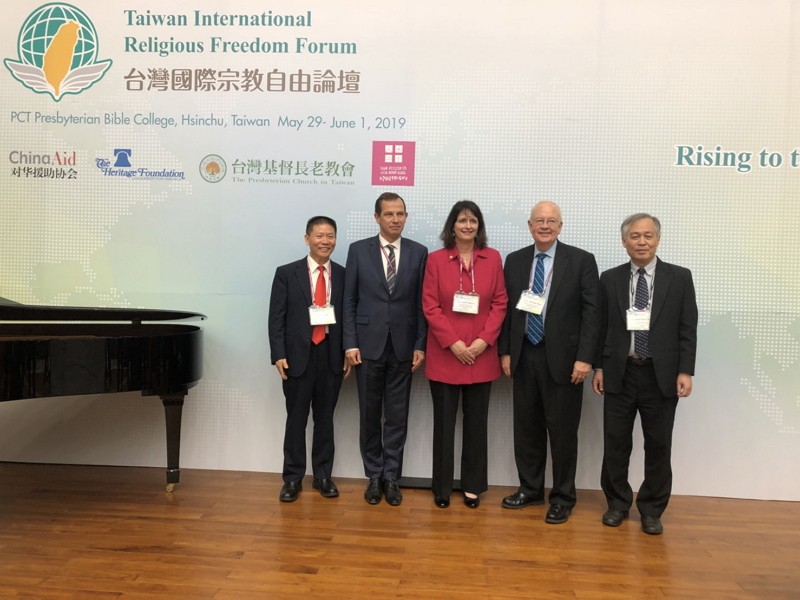 Bob Fu is an American hero. Having narrowly escaped the atrocities of Tiananmen Square 30 years ago, Bob served time in a Chinese prison, fled to Hong Kong, then was warmly welcomed 20 years ago as a refugee to the United States. Now based in Midland, Texas, his non-profit organization, ChinaAid, is a powerful voice for freedom for all human beings everywhere.

But uppermost in Bob Fu’s mind is the horrific plight of Chinese Christians, Tibetan Buddhists and Uyghur Muslims suffering back in his native land. He is a modern-day Paul Revere, sounding the alarm around the world — especially in America — about growing religious repression at the hands of the Chinese Communist regime under ruthless Xi Jinping, now Chinese Communist Party leader for life. Churches are being destroyed, crosses torn down and House church leaders arrested. Under the Communist Party’s stepped-up war against religion, children under age 18 are now forbidden to receive religious instruction. Not even Mao went so far.

From his home base in the rugged Permian Basin, Fu is a tireless advocate around the world for religious liberty. He was principal organizer of the historic Taiwan International Religious Freedom Conference, which met in Taipei in late May and early June, bringing together government officials and human rights activists from 23 countries around the globe. Their message echoed the mighty words of the United Nations Charter and the Universal Declaration of Human Rights: Every human being enjoys the fundamental right of freedom and basic dignity, beginning with religious liberty.

Conference participants heard from Taiwan’s president and vice president, who spoke bravely about the clear and present dangers of Chinese repression. Time and again, representatives called out Chinese atrocities for moral condemnation, including the persecution of millions of Uyghur Muslims in Xinjiang province. Journalists and investigators from several countries, including a BBC reporter and a London-based American writer, chronicled an unspeakable crime against humanity — the forced organ-harvesting of imprisoned Ugyhurs, who are of Turkish descent. Evidence of this grisly practice — enthusiastically sanctioned by the Communist Chinese regime — is overwhelmingly convincing. Beijing admits to past episodes but lamely denies such atrocities continue. The conference proved yet again that the Communist Party of China not only blatantly lies to the entire world but stands for the most unspeakable crimes against humanity.

Among other actions, the conference called for the inspection of burgeoning Uyghur concentration camps in northwest China by the American Red Cross and reunification of families forcibly separated by mass internment on a scale not seen since World War II.

Currently, Congress is considering legislation not only to condemn these barbaric yet highly lucrative medical practices but also to impose additional sanctions on the Chinese regime for its treatment of this beleaguered religious and ethnic minority community. Trade tariffs and related sanctions against China’s long-standing commercial abuses are one thing, but Communist Chinese crimes against humanity cry out for separate and distinct condemnation, as well as effective remedial action.

As the conference emphasized, China likewise continues to prop up the regime of Kim Jung-un, which notoriously oppresses its Christian community. To possess a Bible in North Korea is to face torture and then a firing squad. The conference heard from one courageous North Korean refugee who upon her forced repatriation from China was shockingly coerced to undergo a late-term abortion without anesthesia. Thankfully, she eventually escaped the Kim family’s evil clutches once again to tell her inspirational story of undaunted courage in the face of profound cruelty.

Others are not so lucky. Every year, the Chinese regime returns thousands of refugees into Pyongyang’s bloody hands knowing full well that their earthly destiny will be, at best, forced labor and severe deprivation of life’s basic necessities.

The conference concluded on June 1 with adoption and announcement of the “Taiwan Declaration on the Persecution of the Uyghurs.” As ChinaAid’s Texas-based chairman, Doug Robison, recited the declaration before the hushed assembly, Taiwanese Vice President Chen Chien-jen presided, no doubt ever mindful of the aggressive Chinese tiger poised menacingly across the Straits of Taiwan.

Taiwan is a small island nation of 26 million individuals, including the culturally thriving 17 indigenous tribes who inhabited the land for centuries before the arrival of displaced Chinese escaping Mao’s march to power on the mainland. While living for decades under China’s long shadow, the plucky and entrepreneurial people of Taiwan breathe the bracing air of freedom. The Taiwan conference, and the bold comments of the island nation’s duly elected president and vice president speaking truth to Beijing power, reflect the indomitable quest to achieve humanity’s fundamental freedoms. Those liberties are captured in the Taiwan Declaration’s closing words, setting forth the conference’s “commitment to highlight and condemn the abuse of religious freedom experienced by the Uyghur people.”

With the 30th anniversary of the Communist Party’s massacre of its own people in Tiananmen Square at hand, hopes for democracy and human rights to finally emerge on the Chinese mainland seem increasingly unrealistic and remote. In the meantime, a vibrant Taiwanese democracy — an unapologetically bold champion of human rights, including religious freedom — thrives and prospers in the South China Sea.