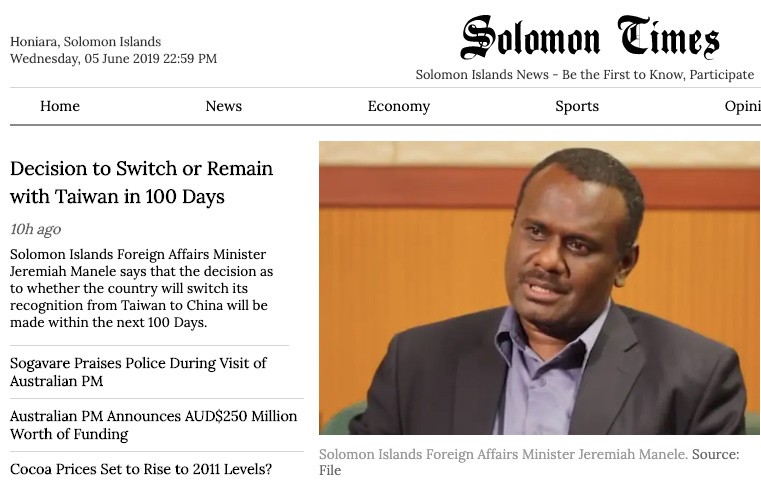 TAIPEI (Taiwan News) – The Solomon Islands will decide whether or not to switch diplomatic ties from Taiwan to China within 100 days, Foreign Affairs Minister Jeremiah Manele said Wednesday (June 5).

Ever since elections earlier this year, reports have been floating around that the island group close to Papua New Guinea and to Australia might choose to recognize Beijing, leaving Taiwan with only 16 official allies.

After remarks by Manele published by the Solomon Times Wednesday, the Ministry of Foreign Affairs in Taipei said relations with the Pacific archipelago were stable.

Manele denied any influence on the decision by recent prominent government visitors from Australia and New Zealand, though other politicians said the two countries might be wary about the impact of a switch toward China.

Planning Minister Rick Hou, a former Prime Minister who was often mentioned as the first to come up with the idea of a break with Taipei, now said he favored otherwise, the Solomon Times reported.

“Any decision needed to be done very cautiously and with awareness about the current geopolitical climate,” the newspaper quoted Hou as saying. “Personally I think remaining with people that we know would be the best option for us in terms of our long term interests.”

He also referred to problems between China and certain countries in Africa and Asia as a reason for him to be hesitant about cutting ties with Taiwan, the Solomon Times reported.