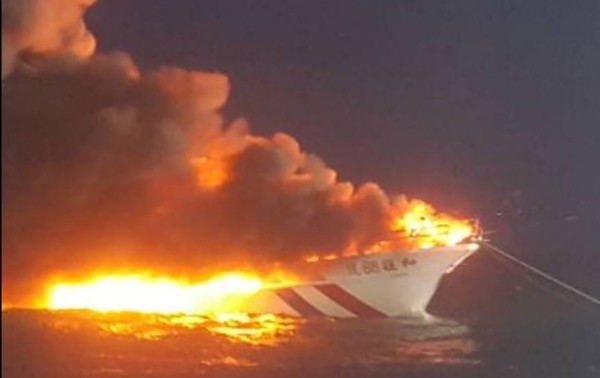 TAIPEI (Taiwan News) -- A Taiwanese fishing vessel suddenly burst into flames on Tuesday evening (June 4) and all fishermen and crew members were successfully rescued, but one lost consciousness and was hospitalized.

A fishing vessel registered in Shen-ao, Keelung became engulfed in flames in the waters off of Pengjia Islet at 6:57 p.m. on Tuesday with 25 fishermen and 5 crew members on board, reported China Times. Fortunately, the Coast Guard quickly dispatched four patrol boats to the scene, including PP-10050, PP-5053, PP-3566, and RB-02, which aided in the rescue of all of the ship's complement.

The Keelung Coast Guard team said that just before 7 p.m. on Tuesday evening, the hull of the Ho Wang No. 88 (和旺88號) suddenly caught fire as it sailed 14 miles southwest of Pengjia Islet, reported UDN. Three nearby fishing boats, including the Infinity (無限號), the Starfish (海星號), and the Big Bite (大咬號), then quickly sped towards the burning ship to rescue the trapped crew members, reported China Times. According to the Coast Guard, there were 26 Taiwanese and four foreign fishermen on board, 29 of whom are safe at present, but one, surnamed Tsou (鄒) was initially found to be unconscious. Tsou, who was one of three survivors rescued by the Infinity, was transferred to the 100-ton Coast Guard patrol boat PP-10050 and rushed back to Keelung Harbor at 9 p.m. that night.

Infinity, Starfish, and Big Bite took the remaining 27 crew members into port shortly afterward. The cause of the fire is still under investigation.