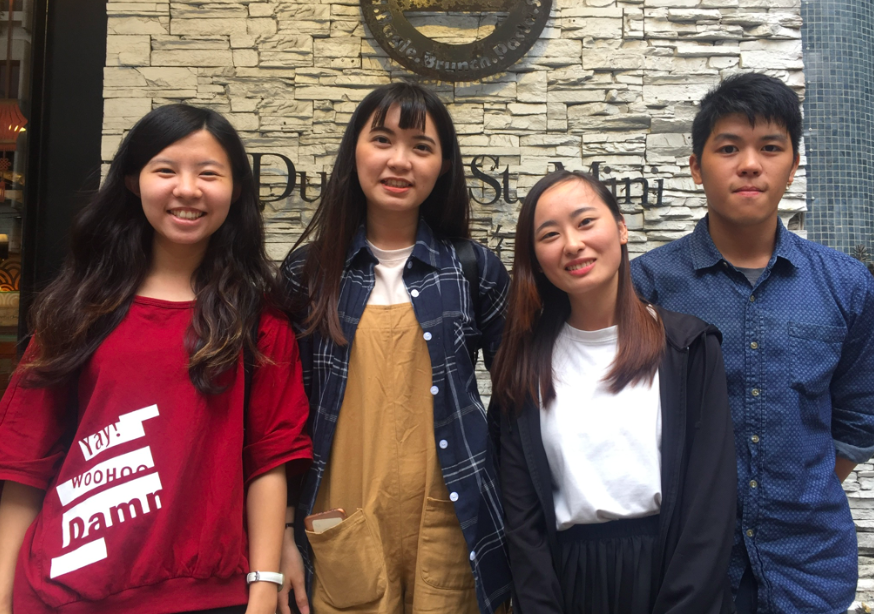 TAIWAN (Taiwan News) -- A new immigrant from Hong Kong, Hau-Min Lui (呂巧棉), cooperated with her classmates and create a beautiful fitness equipment which has been showcased in YODEX.

The 38th edition of Young Designers' Exhibition (YODEX) showcased the 3,848 pieces from 65 schools in Taiwan. In the exhibition, the topics including military, fashion, eco-friendly, and medical could be viewed.

Among the exhibitors are students from various countries who have expressed collaboration with different cultures, as the students’ horizons have been broadened. Taiwan News interviewed a team from Ming Chuan University (銘傳大學) that consisted of three Taiwanese and one student from Hong Kong.

The four graduates from the department of product design of Ming Chuan University (銘傳大學), Chih-Chien Lan (藍芷謙), Yu-Wen Deng (鄧郁玟), Han Wu (吳翰) and Hau-Min Lui (呂巧棉) have collaborated in the design of a new type of fitness equipment, Cloud Gym (筋斗雲), aiming to ease the users’ neck and shoulder aches. With its beautiful design and practical function, it has been selected to be showcased in the 2019 Young Designers’ Exhibition (YODEX) as well as nominated for the Red Dot Design Award.

Taiwan News interviewed the team about the concept of Cloud Gym and the team work experience. Furthermore, we exclusively asked Lui about her life as a college student in Taiwan.

What is the idea behind Cloud Gym? Cloud Gym is based on the physical form of the creature, Nautilus, and they aim to develop it into an installation art. The purpose of Cloud Gym is to ease people’s sore necks or painful shoulders, while also trying to infuse some fun into workplaces.

Were there disputes that happened? If so, then how did you solve them?

According to the team leader, Lan, there were many disagreements and disputes during the team discussions, but none significantly related to nationality differences. Mostly, the members all have strong opinions and different ideas.

“So we vote, discuss with the professors, or try to be persuasive in reaching a consensus, and come up with the best solutions.” said Lan.

One of the team members, Deng, further explained that, although there were at first some language barriers with Lui due to Lui’s Mandarin being subpar as a freshman, and there were different usages in terminology between Taiwan and Hong Kong regarding essentially the same thing, there initially was a problem communicating with her.

Deng pointed out that they taught her the appropriate Mandarin grammar while chatting to create a relaxing atmosphere. Then, through Lui’s hard work and intelligence, she has come to speak fluent Chinese nowadays.

What is the most influential part for Lui while studying three years in Taiwan?

Lui expressed that the education in Taiwan has changed her tremendously. She was a shy little girl before coming to Taiwan, now she has become expressive and thinks independently.

“After coming to Taiwan, I have had to sort things out and overcome difficulties on my own, and that has influenced my character the most. Additionally, with the help of teachers and friends, I have become more confident communicating with others in exchanging ideas and giving feedback.”

Furthermore, Lui pointed out that becoming more expressive has enabled her to evaluate her own artwork, and that that is the most valuable quality she has gained after receiving an education in Taiwan.

What is Lui’s next step?

Currently, Lui is in her senior year at college. She expressed her intention to further explore the design industry in Taiwan.

Lui stated that, in comparison to her hometown, Hong Kong, the chill pace and good quality of life in Taiwan are attractive to her. Also, the diversity of Taiwan’s design industry is very tempting to her. Hence, she would like to find a job and stay in Taiwan.