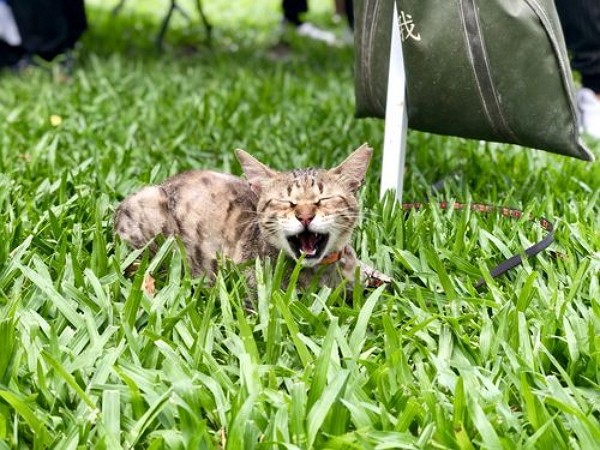 Over 200 animal lovers and animal rights activists in Taipei joined thousands around the world on Sunday to commemorate an annual international event that raises awareness of animal rights.

National Animal Rights Day (NARD), established by the United States-registered non-profit animal rights and planet conservation organization "Our Planet. Theirs Too," in 2011, is observed annually in countries around the world on the first Sunday in June.

The purpose of NARD is to highlight the importance of animal rights, until all animals are free from enslavement and their rights are established and have legal protection, the "Our Planet. Theirs Too" website said.

"Kindness to Animals," the organizer of this year's NARD in Taipei, said the event focused on a number of animal rights, including adoption of pets instead of buying, boycotting live animal performances, banning the capture of animals to perform, gradually reducing and eliminating animal testing, banning the fur trade, and promoting a vegan lifestyle.

Hearing the call of the international movement, Taipei was one of 35 cities around the world to host the event, the Taiwanese civil group devoted to the protection of animal rights said.

The countries and regions where cities hosted events to mark NARD included the U.S., Canada, the United Kingdom, Germany, France, Denmark, Spain, India, Australia, the Philippines, Taiwan and Hong Kong, according to the Kindness to Animals.

Attended by many animal lovers and their pets, the event began with a memorial ceremony to pay respect to the billions of animals that die by human hands every year, in addition to laying flowers in front of posters of suffering animals.

Participants also read "The Declaration of Animal Rights," a proclamation to address the rights of animals, which was drafted in May 2011 and publicly read and signed at the first NARD in New York City in June that year.

Speaking with CNA, an event participant, "Jesse," a New Zealander who has been in Taiwan for about 10 years and currently lives in Hsinchu City, said he came to show his support for animal rights because he knows that there is a lot of animal mistreatment in Taiwan and the world.

"I'm really here just to show my support for animal rights here in Taiwan and the world, I think there is a lot of mistreatment of animals around the world, including here in Taiwan, and it's important it changes, and so this is what it is all about," he said.

In response to questions on his observations about improvements in the treatment of animals in Taiwan, Jesse said he has attended a number of similar events over the years, including the same event last year, and feels Taiwan has a strong and positive animal rights movement.

"Taiwan has a really positive, really active and really strong vegan and animal rights movement and it has been really exciting as a foreigner here to just see it grow from almost nothing to this," he said.

A bill passed by the legislature in October that year, amended Taiwan's statue for the control for cosmetic hygiene and banned cosmetic animal testing for both finished products and cosmetic ingredients. The amended regulations will take effect in October 2019.

A three-year grace period was given to manufacturers to give them time to find alternatives to using animals. In addition, in April 2017 Taiwan's legislature passed an amendment to the Animal Protection Act that prohibits the sale and consumption of dog and cat meat, as well as food products that contain the meat of such animals.

The NARD event was held in Taipei for the second consecutive year this year.