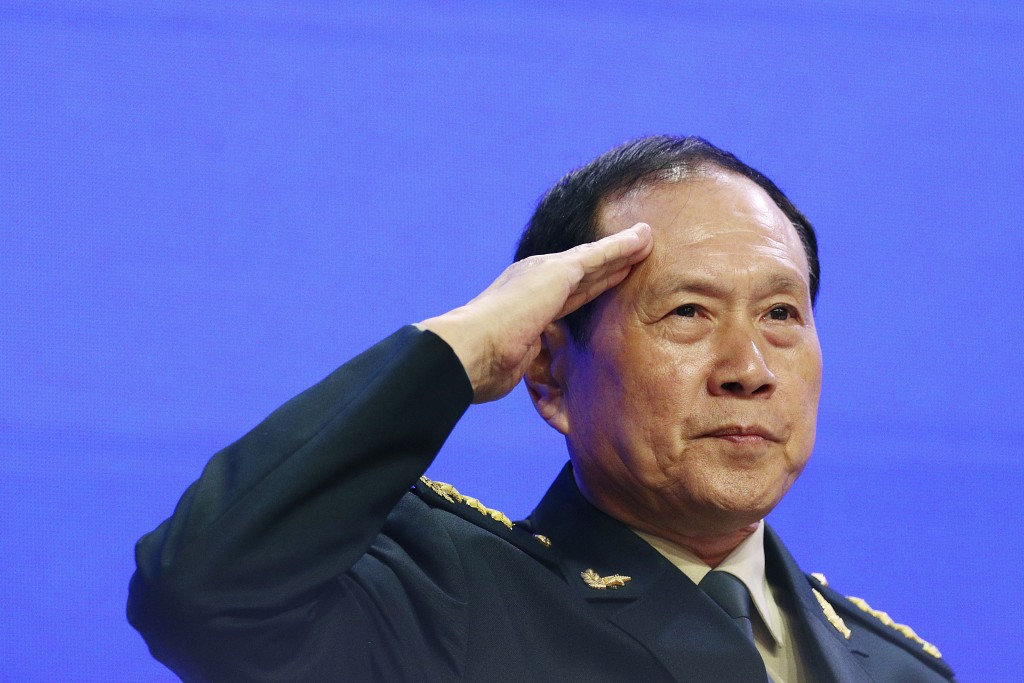 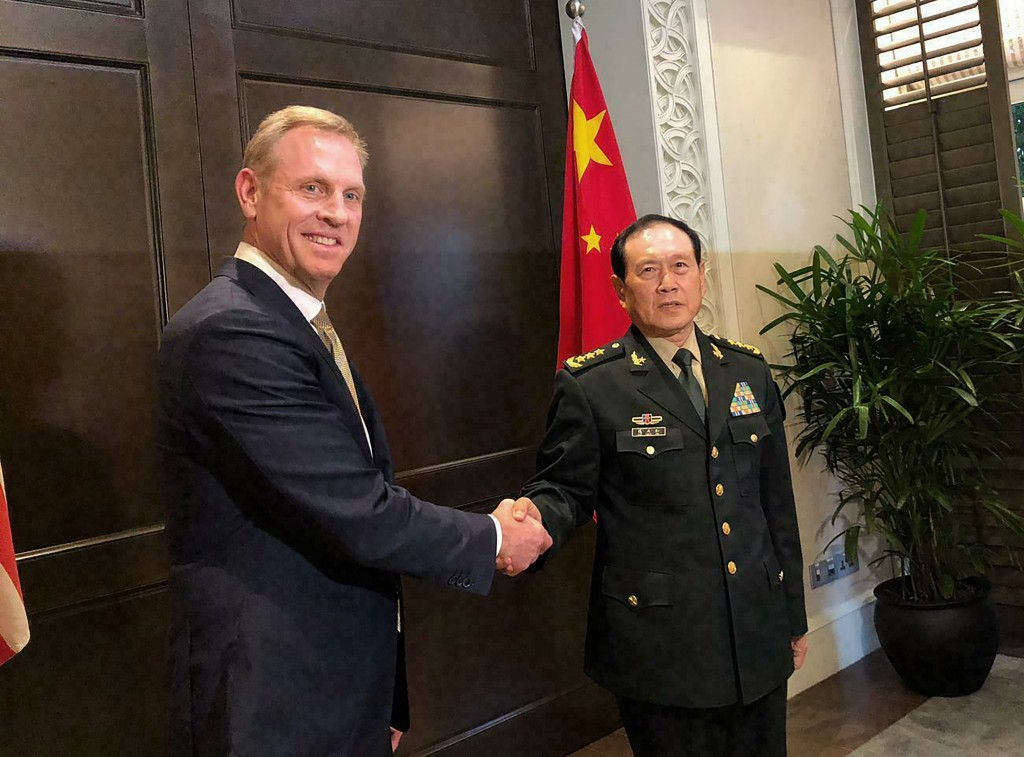 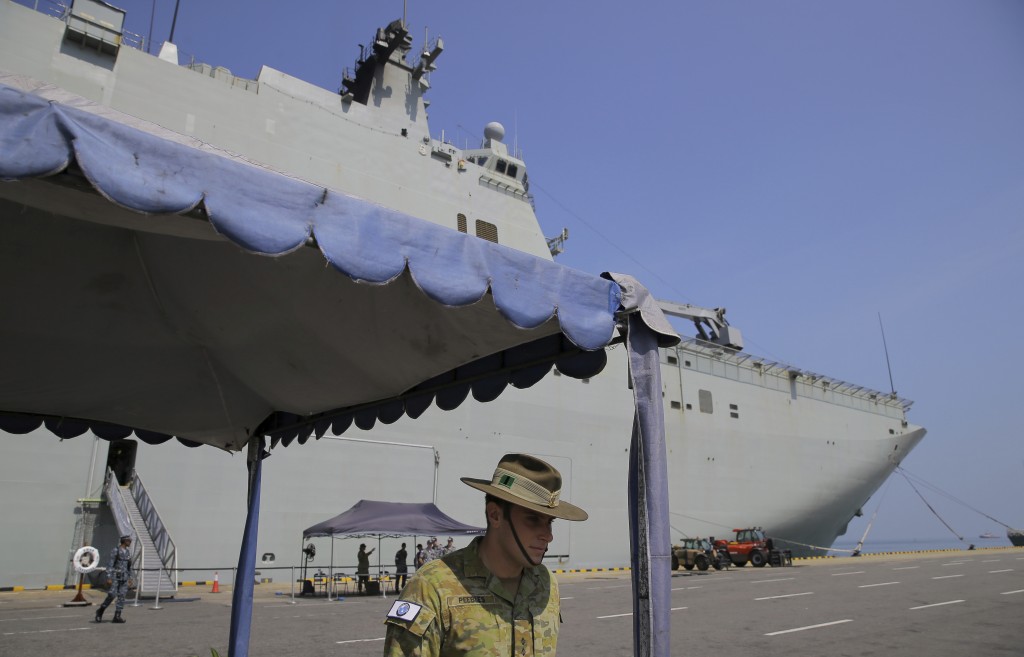 Speaking Sunday at a security conference in Singapore, Gen. Wei Fenghe loaded his address with criticism of activities by Washington, including support for Taiwan and leading "freedom of navigation" operations in the strategic waterways that China virtually claims as its own.

Wei said the People's Liberation Army would not "yield a single inch of the country's sacred land."

"The PLA has no intention to cause anybody trouble but it is not afraid to face up to troubles. Should anybody risk crossing the bottom line, the PLA will resolutely take action and defeat all enemies," Wei said.

Wei was addressing defense chiefs, officials and academics at the Shangri-La Dialogue in Singapore. China last sent a high-ranking general to the conference in 2011.

Wei defended China's man-made islands and the facilities built atop them, calling those "limited defense facilities."

"It is only when there are threats would there be defenses. In face of heavily armed warships and military aircraft, how can we not deploy any defense facilities?" he said.

China also was engaging in two days of military training in the South China Sea on Sunday and Monday in an area near China's holdings in the Paracel island group.

U.S. Acting Defense Secretary Patrick Shanahan denounced China's efforts to militarize man-made outposts in the South China Sea as part of a "toolkit of coercion," saying activities by Beijing the U.S. perceives as hostile must end.

While he didn't specifically name China in early parts of his speech Saturday, Shanahan made clear who his target was, making pointed references to Beijing's campaign to put advanced weapons systems on disputed islands in the region. Beijing has constructed seven outposts equipped with airstrips, radar and missile stations.

"If these trends in these behaviors continue, artificial features in the global commons could become tollbooths. Sovereignty could become the purview of the powerful," Shanahan said in his first major speech overseas.

Still, Shanahan said the U.S. is willing to cooperate with China and welcomes competition, but said behavior that erodes other nations' sovereignty and sows distrust of China's intentions must end.

"Competition does not mean conflict," he said. "Competition is not to be feared. We should welcome it, provided that everyone plays by internationally established rules."

Much of Shanahan's speech centered on America's work with partners across the region.

A witness says Australian navy helicopter pilots were hit by lasers while exercising in the South China Sea, forcing them to land as a precaution.

Scholar Euan Graham, who was onboard the Royal Australian Navy flagship HMAS Canberra on a voyage from Vietnam to Singapore earlier in May, said that the lasers had been pointed from passing fishing vessels while the Canberra was being trailed by a Chinese warship.

China maintains a robust maritime militia in the South China Sea composed of fishing vessels equipped to carry out missions just short of combat. China claims the strategic waterway virtually in its entirety and is sensitive to all foreign naval action in the area, especially by the U.S. and allies such as Australia.

Similar incidents involving lasers and the Chinese military have also been reported as far away as Djibouti, where the U.S. and China have bases. Last year, the U.S. complained to China after lasers were directed at aircraft in the Horn of Africa nation that resulted in minor injuries to two American pilots.

China denied that its forces targeted the U.S. military aircraft.

China's defense ministry on Thursday said the report of Australian pilots being targeted by lasers was "not consistent with the facts."

Australia should "reflect on itself" before pointing the blame at others, spokesman Wu Qian told reporters at a monthly briefing.

"According to my knowledge, what you have said is not consistent with the facts," Wu said.