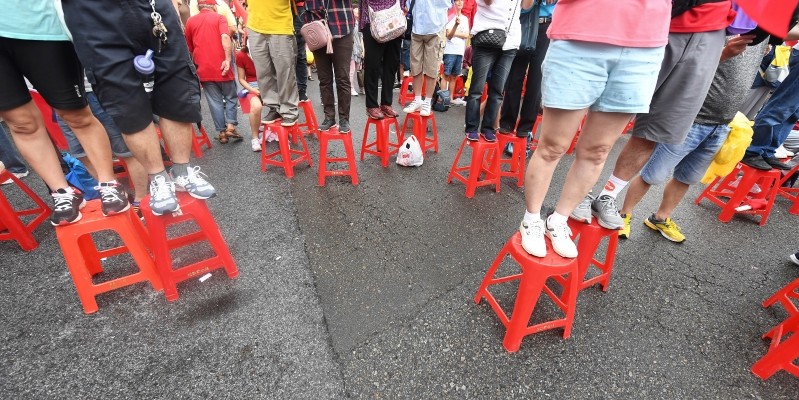 At a rally held Saturday (June 1) to announce Han's bid for the 2020 Taiwan presidential race in Taipei, organizers revised their estimate of attendees from 250,000 to 400,000. However, police estimate only 70,000 people were present, DPP City Councilor Liang Wen-chieh (梁文傑) said that Ketagalan Boulevard's capacity is 75,000, and netizens have estimated that as few as 17,000 were likely there, according to local media reports. On his YouTube channel, political commentator Li Yi-ping puts the number at below 30,000.

Taiwanese netizens estimate that under crowded conditions, about three to four people could be packed per square meter. Because the entire surface area of that section of Ketagalan Boulevard around East Gate is only about 5,680 square meters, the crowd could have only ranged in size between 17,040 to 22,720 people. Large gaps can be seen in the crowd. (CNA photo)

A Facebook user surnamed Wu said that three to four people per square meter is very cramped, but live video from the rally showed plenty of room for people to mill around. Wu wrote that, "The red shirts worn by the people in aerial photos had the effect of making the crowd appear dense," but that the claims of 50,000 new attendees arriving every 10 minutes were hard to believe. He estimates that given the area around East Gate on Ketagalan Boulevard is only 5,680 meters and because he thinks the density was more like around 3 per square meter, the total crowd size was probably around 17,040. Wu closed by saying, "How many people were really here today? Facts speak louder than words.

Meanwhile, political commentator Lee Yi-ping on his YouTube channel said that he asked three engineers to estimate the size of the crowd and they came to the conclusion that less than 30,000 were present.

He said that each engineer viewed video footage of the rally, estimated the size of the area based on city maps, broke the area into a grid of 100 squares, and estimated the average number of people in each square. Lee said that the three engineers then came up with the three following estimates of crowd size that day: 25,000, 26,000, 28,000.