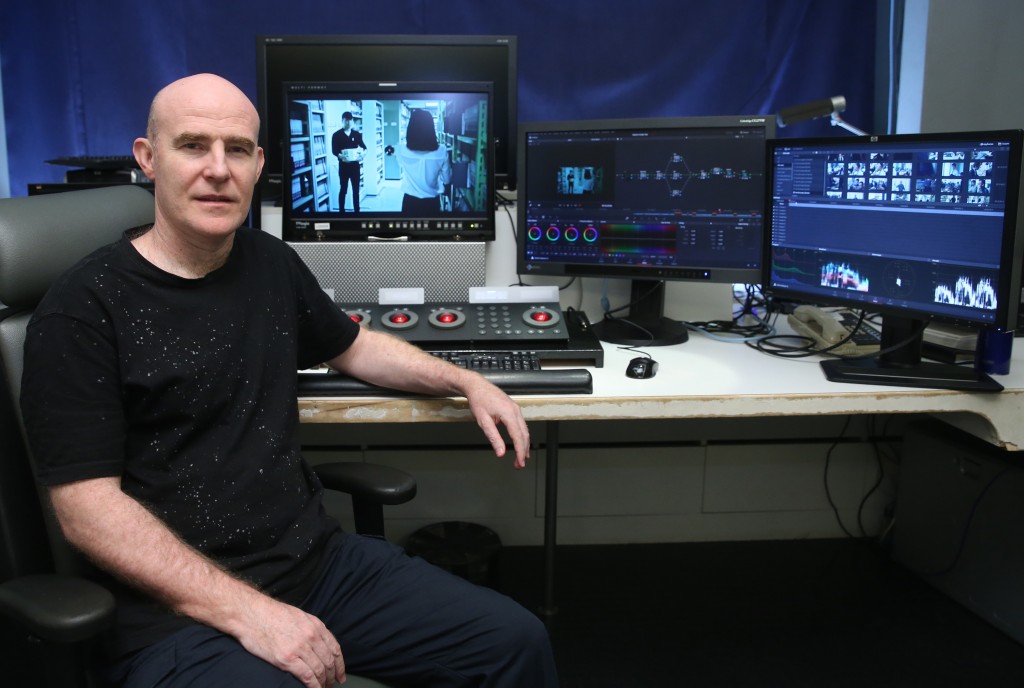 TAIPEI (CNA) - "Every time I travel overseas with my family, we always use different passports, my wife and kid have Taiwan passports but not me," Paul Hanrahan told CNA during a recent interview when asked about why he applied to become a Taiwan citizen.

"I did so so that we can all use the same passport," the colorist originally from South Africa said.

Color grading is the process of improving the appearance of an image for presentation in different environments on different devices, especially in film production.

He is one of the 133 foreign professionals who have been approved for naturalization in Taiwan without having to surrender their original citizenship over the past two years, since amendments to the Nationality Act were passed in December 2016.

The amendments allow high-level foreign professionals to obtain Republic of China (Taiwan) citizenship without relinquishing their original nationality, as part of the Taiwan government's ongoing efforts to recruit and retain top talent from around the world.

These high-level foreign professionals have been granted citizenship after meeting special requirements in the fields of education, economics, medicine, agricultural machinery, culture and the arts, according to Taiwan's interior ministry.

Previously, applicants had to give up their original citizenship to become a Taiwan citizen, making many reluctant to do so.

Recalling his first encounter with Taiwan, the 47-year-old colorist said he first visited the island in 2004 as a tourist. Back then he was left with a favorable impression of the beautiful landscape of the country as he climbed several mountains with Taiwanese friends.

It was also in 2004 that Hanrahan first got in touch with Digimax, maintaining contact with the Taiwanese studio on and off until 2009 when he was given the opportunity to join the company and chose to settle in the country.

Asked what he loves most about living in Taiwan, after spending a decade here, Hanrahan said it is only in Taiwan that he has found a perfect balance between work and life.

He has always been a big fan of Asian and Chinese culture as a whole and practiced Hung Kuen (洪拳), a southern Chinese martial art, in South Africa. Due to his love for the culture he also studied a little Chinese, but it is only the past three years that he began to study the language seriously.

It was also through work in Taipei that he met his wife. He was introduced to her by a colleague at the studio and they now have a 2-year-old child.

After settling down and starting a family, Hanrahan began to think about becoming an ROC citizen.

Hanrahan said he loves raising his child here because Taiwan offers a mixture of Chinese and Western culture where one can learn the best of both worlds.

However, he hates the feeling whenever the family travels aboard and he and his wife and child use different passports.
"I always wanted us someday to be able to use the same passports."

Although being married to a Taiwan national he is entitled to be naturalized as a Taiwan citizen, Hanrahan was initially reluctant because it required him to give up his South African citizenship.

It was only after the Taiwan government amended the laws in late 2016 so foreign nationals can obtain Taiwan citizenship without giving up their original citizenship, that he applied for naturalization.

"I think the new policy makes more people consider becoming a Taiwan citizen as it gives more incentive, especially not having to give up your original nationality," he said.

He was told his application passed in May, "it feels pretty good to hear that."

Asked to share any tips on passing the screening, Hanrahan said the trick lies in explaining clearly to the authorities the importance of one's work in Taiwan.

"There are more than 200 people involved in shooting a movie and I had to convince government officials the importance of my work as a colorist," he noted.

Since making a significant contribution to Taiwan society is another important criteria in citizenship applications, Hanrahan said in his presentation he also highlighted the fact that he teaches color grading to give back to the nation in his free time.

After working in Taiwan for nearly a decade, the South African national says he has witnessed first hand the ups and downs of the Taiwan film industry. Despite the rise of the Chinese movie industry over the past decade, he still believes Taiwan has an edge in the field.

"For instance, the relatively small size of the island allows one to travel from mountainous areas to the seashore in less than an hour, which is itself an edge for a film crew," he said.

The relatively warm weather on the island, even in winter, is another advantage for filming in Taiwan compared with the Chinese mainland where most of the country is freezing during winter, he added.

Now a proud Taiwanese, Hanrahan said he encourages foreign nationals to visit Taiwan and experience firsthand the unique culture of the country which is a distinctive fusion of Eastern and Western cultures. By Joseph Yeh, CNA staff reporter