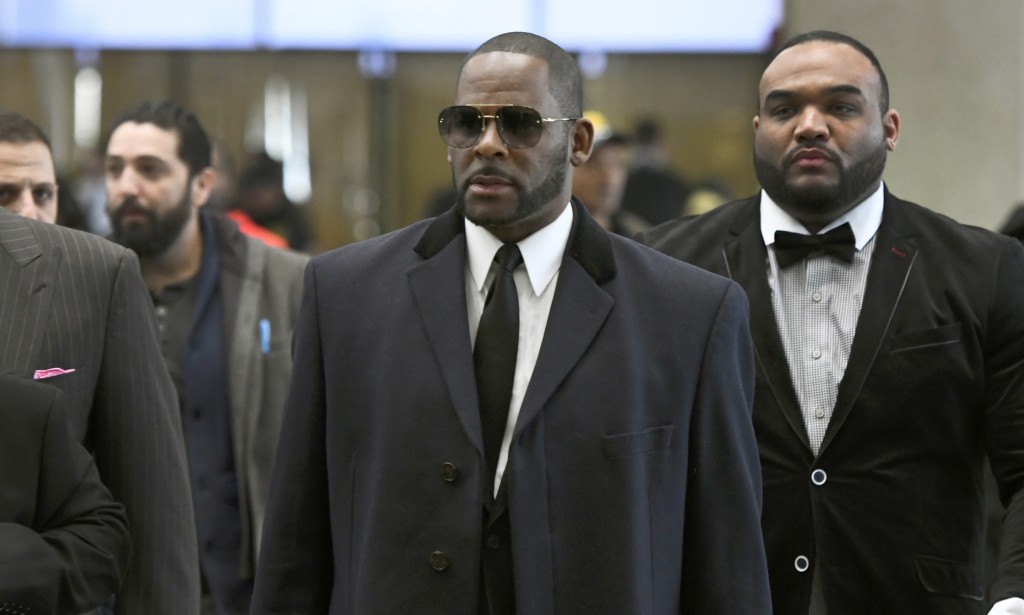 — Jan. 8, 1967: Robert Sylvester Kelly is born in Chicago to Joann Kelly, a schoolteacher. R. Kelly, the third of four children, lives with his family in Chicago's housing projects. Little is known about his father.

— 1975: At age 8, Kelly begins singing in church. Around the same time, his mother teaches him how Stevie Wonder sings by putting a nickel on the record player needle to slow down the revolutions. "So the runs could go really slow and then you learn them," Kelly told ABC News in 2004.

— 1979: At age 12, Kelly said, he "experienced a lot of things at a very young age that I don't know if I was supposed to," including witnessing older youth rape one of his girlfriends.

— 1983: At age 16, his mother moves the family from the projects and enrolls her son at the prestigious Kenwood Academy, a Chicago public school. Kelly meets his mentor, Lena McLin, who chairs Kenwood's music faculty. "She was my second mother. She made me feel I could do anything," Kelly told People in 1994.

— 1984: At age 17, his music teacher places him in a local talent show to perform a version of "Ribbon in the Sky," a Stevie Wonder song. "That night it was like Spider-Man being bit. I discovered the power you get from being onstage," he told Newsweek in 1995. In the years that follow, he performs in Chicago's subway stations full time with his Casio keyboard, often pretending he's blind to avoid arrest.

— November 1993: His first solo album "12 Play" is released and eventually sells more than 5 million copies. Hit singles include "Sex Me" and "Bump N' Grind," which becomes the longest-running No. 1 R&B song in more than 30 years.

— Aug. 31, 1994: At age 27, Kelly marries 15-year-old R&B singer Aaliyah D. Haughton. The couple weds in a secret ceremony arranged by Kelly at a hotel in Chicago. The marriage is annulled months later because of Aaliyah's age.

— November 1996: Kelly releases his album, "R. Kelly." A month later, he incorporates Rockland Records, where he can groom new artists, and his song "I Believe I Can Fly," from the "Space Jam" soundtrack, peaks at No. 2 on the Billboard pop chart. The same year, he marries 22-year-old Andrea Lee, a dancer from his touring troupe. The couple goes on to have three children: Joanne, Jaya and Robert Jr.

— Feb. 18, 1997: Tiffany Hawkins files a complaint against Kelly alleging intentional sexual battery and sexual harassment while she was a minor, according to court records.

— January 1998: Hawkins' lawsuit is reportedly settled for $250,000, shortly after she gave a seven-hour deposition.

— February 1998: Kelly wins three Grammys for "I Believe I Can Fly," including best R&B song and best male R&B performance.

— August 2001: Tracy Sampson files a lawsuit against Kelly, alleging their sex was illegal under Illinois law because he was in "a position of authority" over her. The case is reportedly settled out of court in the spring of 2002, for an undisclosed amount.

— Feb. 8, 2002: The Chicago Sun-Times reports that it received a 26-minute, 39-second videotape allegedly showing Kelly having sex with a minor. The paper reports Chicago police began investigating allegations about Kelly and the same girl three years earlier. At the time, the girl and her parents deny she was having sex with Kelly.

The same day the news breaks, Kelly performs at the opening ceremonies for the Winter Olympics in Salt Lake City.

— January 2003: Kelly is arrested at a Miami Dade hotel in Florida on additional child pornography charges after investigators said they found photos of him having sex with a girl. Kelly is released from jail on $12,000 bond. Charges are later dropped after the judge rules police didn't have a warrant to search Kelly's house.

— September 2005: Andrea Kelly asked for an order of protection from her husband, accusing the singer of hitting her when she said she wanted a divorce. The couple reconciles. She says later they live in different homes.

— February 2006: Kelly's brother, Carey Kelly, says his brother offered him $50,000 and a record deal to say he was the person on the sex video.

— August 2007: In Chicago, Judge Vincent Gaughan rules that jurors and the public will see the sex tape in open court, rejecting arguments from defense lawyers and prosecutors that it shouldn't be shown.

— September 2007: Following a five-year delay, the trial is scheduled to start — but Gaughan postpones it until 2008. He doesn't explain why.

— Dec. 21, 2007: Gaughan decides not to revoke Kelly's bond after threatening to do so when the singer failed to show up at a hearing a few days earlier. Kelly was in the middle of a 45-city tour and said his bus had been held up by police for speeding in Utah.

— June 13, 2008: Kelly acquitted on all counts after less than a full day of deliberations.

— July 12, 2011: Crain's Chicago Business reported that a $2.9 million foreclosure was filed by JPMorgan Chase bank against Kelly's suburban Chicago mansion. A spokesman claims the singer was not having financial trouble.

— March 21, 2012: Kelly announced he was reviving his cult classic video series, "Trapped in the Closet." The project began as five videos for his dramatic cliffhanger songs in 2007, and eventually grew to several dozen musical chapters dealing with a web of sexual deceit. Kelly teamed with IFC to premiere the old and new series, and performed the rap opera at events including a sing-along at Bonnaroo. There was talk of a Broadway show.

— Sept. 4, 2012: After successful romantic albums 2012's "Write Me Back" and 2010's "Love Letter," Kelly vowed not to abandon the explicit music that helped make him famous. "Make no mistake about it, R. Kelly is not going anywhere. It's just that R. Kelly has such a unique talent, and I've been blessed to be able to do all type of genres of music ... I'm exploring my gift right now," Kelly told The Associated Press.

— June 27, 2012: Kelly publishes his autobiography, "Soulacoaster: The Diary of Me," focusing on his creative and family life rather than his legal troubles.

— Sept. 29, 2012: Kelly was nominated for two Soul Train Awards, making him the most nominated act ever at the awards show.

— July 17, 2017: BuzzFeed reports on parents' claims that Kelly brainwashed their daughters and was keeping them in an abusive "cult." One woman says she was with Kelly willingly. Following the BuzzFeed report, activists launched the #MuteRKelly movement, calling for boycotts of his music.

— April 30, 2018: The Time's Up campaign, devoted to helping women in the aftermath of sexual abuse, joined the #MuteRKelly social media campaign and issued a statement urging further investigation into Kelly's behavior, which had come under closer scrutiny over the last year as women came forward to accuse him of everything from sexual coercion to physical abuse. An appearance at a concert in his native Chicago was canceled after protests. Kelly's camp responded: "We will vigorously resist this attempted public lynching of a black man who has made extraordinary contributions to our culture."

— May 11, 2018: Spotify cuts Kelly's music from its playlists, citing its new policy on hate content and hateful conduct. Kelly's team says he has only promoted love in his music and that Spotify is acting on "false and unproven allegations." They note other artists on the service have been accused or convicted of crimes.

— May 21, 2018: News outlets report that Apple and Pandora are also not promoting Kelly's music, though both companies haven't officially made announcements.

— May 21, 2018: Faith Rodgers, 20, accuses R. Kelly of sexual battery, mental and verbal abuse, and knowingly inflicting her with herpes during a yearlong relationship, according to a lawsuit filed in New York.

— Jan. 3, 2019: Lifetime airs the documentary "Surviving R. Kelly," which revisits old allegations against him and brings new ones into the spotlight. The series follows the BBC's "R Kelly: Sex, Girls & Videotapes," released the previous year, that alleged the singer was holding women against their will and running a "sex cult."

— Jan. 8, 2019: Cook County State's Attorney Kim Foxx holds press conference after her office is inundated with calls about the allegations in the documentary, some tied to Kelly's Chicago-area home. Foxx says there's no active investigation of Kelly and that launching one would require victims and witnesses.

— Jan. 9, 2019: Lady Gaga apologizes for her 2013 duet with Kelly in the wake of the sexual misconduct allegations against him, saying she intended to remove the song, "Do What U Want (With My Body)," from streaming services. The collaboration had been intensely criticized when it was released, in part because of the allegations against him and because of the sexually charged performances they did on "Saturday Night Live" and the American Music Awards in 2013.

— Jan. 14, 2019: Faith Rodgers said Kelly had written a letter last October to one of her lawyers, threatening to reveal embarrassing details of her sexual history if she didn't drop her May 2018 lawsuit accusing him of sexual abuse. The Chicago Tribune publishes a story detailing court records it obtained on a July lawsuit seeking payment of $174,000 in back rent and other costs for Kelly's Chicago recording studio. A signed eviction notice was put on hold for Kelly to pay by Jan. 21.

— Feb. 1, 2019: An estimated 25.8 million people had seen all or some of the six-part documentary series that brought together dozens of people who accused Kelly of sexual misconduct, primarily contact with underage girls, since the first episode aired Jan. 3, according to the Nielsen company.

— Feb. 6, 2019: Kelly announced by tweet a new tour outside the U.S., saying he'd be going to Australia, New Zealand and Sri Lanka. The tweet was later deleted following a backlash from Twitter users who urged fans not to buy concert tickets.

— Feb. 14, 2019: Attorney Michael Avenatti said he gave Chicago prosecutors new video evidence of Kelly having sex with an underage girl, and that it is not the same evidence used in Kelly's 2008 trial, when he was acquitted on child pornography charges.

— Feb. 22, 2019: Kelly is charged with 10 counts of aggravated sexual abuse. He is arrested after turning himself in to police.

— March 6, 2019: CBS airs interview in which Kelly vehemently denies the sexual abuse charges against him. Later, authorities in Cook County take Kelly into custody after he tells a judge he couldn't pay $161,000 in back child support he owes his children's mother.

— May 30, 2019: Cook County prosecutors charge Kelly with 11 new sex-related counts , including four charges of aggravated criminal sexual assault that carry a maximum sentence of 30 years in prison. The new charges apparently pertain to a single victim, identified in the court filing by the initials "J.P." It isn't clear if she is the same person as one of the initial four accusers who also was identified by the same initials in court documents.

Check out the AP's complete coverage of the investigations into R. Kelly.