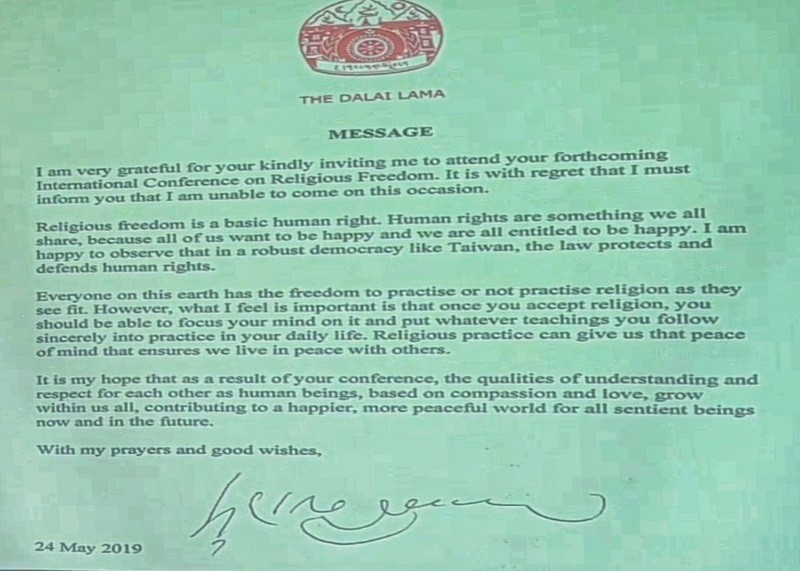 TAIPEI (Taiwan News) -- The 14th Dalai Lama sent a letter dated May 24 to the International Conference on Religious Freedom, held in Hsinchu on Thursday (May 30), which said religious freedom is a human right.

President Tsai Ing-wen (蔡英文), who also attended the conference, said Taiwan is the freest country in the Indo-Pacific region in terms of religion. She thanked the Dalai Lama for sending the message and a blessing the conference would contribute to a happier, more peaceful world

Tsai also thanked other religious leaders and representatives from around the world for attending the conference, saying, “Let’s work hand in hand and through dialogue, to strive for freedom of religion for all mankind.”

She also posted the letter on her Facebook page, on Thursday afternoon:

“Religious freedom is a basic human right. Human rights are something we all share, because all of us want to be happy and we are all entitled to be happy,” the letter read. “I am happy to observe that in a robust democracy like Taiwan, the law protects and defends human rights.”

The Dalai Lama added that everyone should have the freedom to practice or not practice religion as they see fit.

At the end of the letter, he gave the conference his blessing, saying, “It is my hope that as a result of your conference, the qualities of understanding and respect for each other as human beings … grow with us all.”