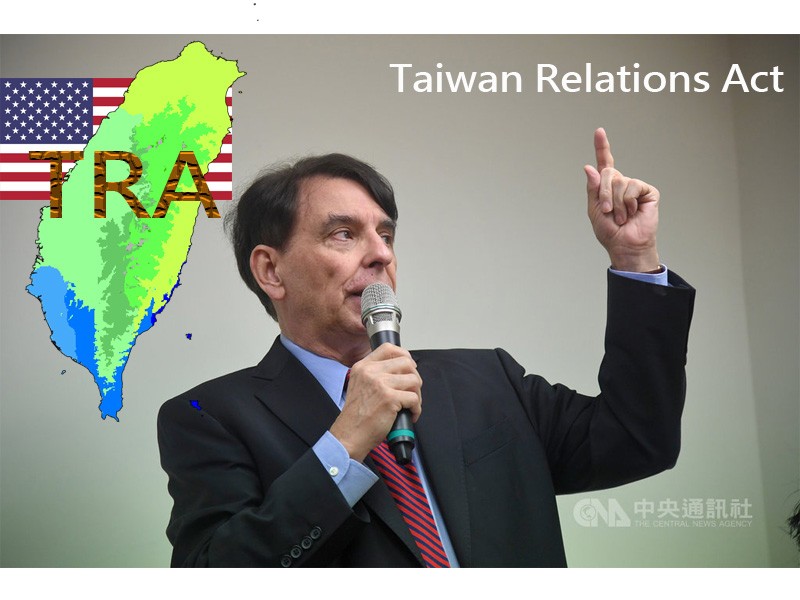 TAIPEI (Taiwan News) -- Taiwan’s government announced on May 25 it was changing the name of the Coordination Council for North American Affairs (CCNAA), the organization it originally established in 1979 to oversee Taiwan’s relationship with the United States, to the Taiwan Council for U.S. Affairs (TCUSA).

President Tsai Ing-wen (蔡英文) welcomed the positive development, reached by consensus between the two governments, as the latest example of progress in Taiwan’s relations with the United States. Remarkably, the original name by design gave no indication that CCNAA had anything to do specifically with Taiwan or the U.S.

As welcome as the name change therefore is, it also serves as a reminder that the U.S. government now also needs to address problems associated with TCUSA’s counterpart organization in Rosslyn, Virginia: AIT Washington. In our enthusiasm for any progress at all in U.S. relations with Taiwan, we may forget to ask whether TCUSA and AIT Washington really need to exist, if at all, as anything more than transparent fig leaves.

I cannot knowledgeably comment about TCUSA’s role or the roles of its top-notch representatives whom I have met and respect. I do, however, have fundamental concerns about AIT Washington. These include the fact that it plays no official role in the U.S. government’s policy toward Taiwan, has no place in the policy chain of command, and it has a history of sometimes acting contrary to U.S. policy.

It also delivers messages to the Taiwan government and others different from what they have heard from AIT Taipei. Finally, it has had a record of acting independently of U.S. laws and regulations. (On the last point, see the redacted version of the State Department Office of the Inspector General’s 2012 report on AIT Washington at https://timemilitary.files.wordpress.com/2012/10/taiwan.pdf).

Most important, the very existence of AIT Washington impedes and offers an excuse for less direct contact between U.S. government officials and representatives of the Taiwan government. This in fact was clearly the intention of those who created it.

Meanwhile, AIT Washington expends substantial U.S. government funds to maintain its office in Rosslyn, Virginia, -- whose rent alone the last time I checked cost $US 2 million per year -- performing minimal duties that could be equally well done and in a more coordinated fashion by a slightly expanded Office of Taiwan Coordination (OTC) and other offices at the State Department.

This would include visas, administrative arrangements for high-level visits to and from Taiwan, and greeting high-level Taiwan visitors. Even in the absence of an AIT Washington, a Board of Directors could still meet periodically in conjunction with the Bureau of East Asian Affairs and OTC to exercise oversight.

Significantly, the Taiwan Relations Act (TRA) which established the American Institute in Taiwan makes no mention of an “AIT Washington”:

“The American Institute in Taiwan, a nonprofit corporation incorporated under the laws of the District of Columbia, or such comparable successor nongovernmental entity as the President may designate, (hereafter in this Act referred to as the ‘Institute’).”

Notably, the TRA speaks only about establishing the American Institute in Taiwan (AIT) and does not specify that there will be an “AIT Washington.” It also does not define any administrative structure, call for an office in Washington, or make a distinction between having a "Director" in Taiwan and a "Chairman" in Washington.

The idea of a Chairman of an AIT Washington ultimately derives from the TRA’s stipulation that the American Institute in Taiwan will be a "nonprofit corporation incorporated under the laws of the District of Columbia." These laws mandate a Board of Directors. Such a Board usually has a Chair but this is not a stipulation of the TRA.

Much of the frequent confusion in Taiwan about who speaks with authority on U.S. policy stems from the Chinese translations of the “Director” (處長, Chuzhang) in Taipei and the “Chairman” (主席, Zhuxi) in Washington: a much higher rank than a director, even though most Chairmen have had no involvement in determining U.S. policy toward Taiwan, much less the day-to-day affairs of AIT.

The two most recent AIT Chairmen over the last 13 years have both continued to live in Hawaii, which means it is difficult to stay abreast of the latest developments in U.S. toward, and relations with Taiwan. Any sensitive information has to be read at CINCPAC, where the best most relevant information may not be sent.

Moreover, AIT Washington plays no role in the policy process or the chain of command. When I was appointed Director of AIT, I received a letter of instructions from the Secretary of State, reinforcing that I would be reporting to her or her designees (usually the Assistant Secretary of State for Asian Affairs or his Deputy Assistant Secretary overseeing Taiwan policy.) There was no mention of AIT Washington, and no requirement that I brief them or coordinate with them. Although that office had access to most of our AIT reporting, they had to go to the State Department to read anything classified. AIT Washington produced no reporting cables and they rarely included AIT Taipei on their email messages about meetings they might have with the head of TECRO in Washington or other even more important developments.

Like so much else governing U.S. policy toward Taiwan after diplomatic recognition of China on January 1, 1979, everything beyond those brief words in the TRA has been based on the interpretations and conclusions of U.S. government lawyers whose principal aim was to convince China that we had in fact severed “diplomatic” ties with Taiwan even while maintaining, as the TRA puts it, “commercial, cultural, and other relations between the people of the United States and the people on Taiwan, and for other purposes.”

Thus, when I first went to Taiwan to study Mandarin at the Foreign Service-run language school, all USG officials dealt with the following few (among many) examples of “self-imposed” restrictions:

-- We had to surrender our diplomatic or official passports for fear we might use them.
-- We had to sign a document resigning from the Foreign Service while receiving assurances that our status as U.S diplomats would be restored once our assignments were over.
--The U.S. flag was not flown over AIT and, although our name was the American Institute in Taiwan, our AIT logo bore no suggestion of the American flag. (The logo we used was rumored to have been borrowed from the design of the AIG logo.) It was not until I was Director of AIT (2009 - 2012) that we raised the U.S flag and put an aspect of the American flag into our AIT logo).

All of such piddling efforts fooled no one of course, and certainly not Beijing, but it was not until 2002 that Congress took action to instruct that serving civilian officials and military officers could work at AIT. We no longer had to resign or turn in our diplomatic passports but were still instructed not to use them.

I later learned, however, that many diplomats from other countries in their respective “trade offices” regularly used their diplomatic passports to travel to and from Taiwan.

After all, Taiwan would not complain, and many foreign ministries and their diplomats did not want to go to the trouble and apparent indignity of applying for “tourist” passports.

So the role of AIT Washington other than to serve as a Board of Directors was never clearly nor specifically defined. But it was self-evidently designed by Washington lawyers, after the Japanese model, to serve as a cut-out between the Taiwan representative office in Washington and the U.S. government.

In the same way, the parallel Coordination Council for North American Affairs in Taipei was intended to serve as (or at least appear to be) a cut-out between the American Institute in Taiwan and the Taiwan government. As far back as I can remember, however, AIT had not used this intermediary office and instead directly dealt with all levels of the Taiwan government.

Clearly, the Taiwan Government itself had no interest in using such a cut-out. Indeed, the Taiwan representatives in Washington (TECRO) usually called on AIT Washington only when and because they had no direct access to higher level USG officials.

When I was Director of AIT, I usually met at most twice a year for an exchange of lunches or dinners with the head of CCNAA. That was all. My regular practice and that of my colleagues was to call on any appropriate government official we needed to see, as it should be for Taiwan representatives in the U.S. With the passage of the Taiwan Travel Act on March 16, 2018 calling for high-level bilateral communication and visits both in Taiwan and the U.S., it would appear that this entire strategy or charade of indirect contacts is now officially dead.

Sometimes the intervention or more active roles of AIT Chairs have also proven problematic, especially when they were political appointments.

James C. Wood, Jr., apparently a friend of President Clinton, was appointed as Chairman and Managing Director of the American Institute in Taiwan on December 14, 1995 and forced to resign a little over a year later on Jan. 17, 1997.

This followed media reports that he had "solicited donations" from Taiwanese businessmen for Clinton’s re-election campaign, reportedly arguing that they should "thank" Clinton for protecting Taiwan when Beijing had conducted military exercises off the island's coast.

Therese Shaheen, the next political appointee, this time of President George W. Bush, served as the Chair and Managing Director of AIT Washington from Dec. 31, 2002 to April 7, 2004. Although she resigned after only about 15 months, media reports said she was forced to do so because she was so frequently “off the Washington reservation,” making unapproved public statements in support of Taiwan independence.

She reportedly angered the White House and former Secretary Colin Powell whom Chen Shui-bian had also reportedly upset with his own remarks which Washington feared might lead to a war with China.

Apparently recognizing the difficulty of reining in political appointees, the White House since 2004 has appointed only retired Foreign Service officers as chairs even though the positon is designated in the “plum book” for political appointees. The former diplomats were much more likely to follow instructions.

There remains nonetheless a strong risk of AIT Chairs delivering mixed messages, especially when they may only visit Taiwan as well as Washington only a few times a year. In my experience, there were at least two damaging examples of this.

One was a strong suggestion that Washington was seriously thinking about the sale of more sophisticated arms to Taiwan when in fact that claim had no basis.

Another was a case of public remarks following a key Taiwan election indicating that Washington expected the Taiwan government to quickly resolve the dispute over the import of U.S. beef, creating the false impression -- as many Taiwanese already believed -- that evident U.S. support for the winning candidate had been a quid pro quo for solving the beef issue.

AIT’s Organization Needs to Keep Up with Changing Policy

Finally, we need to consider that we are now witnessing the greatest shift in U.S. policies toward Taiwan and the PRC since the Shanghai Communiqué. We find this shift in Congressional resolutions, U.S. government statements on defense and trade policy, in the opinion columns of elite commentators, public opinion polls, and even in the views of the U.S. business community. Now, more than ever, we need increased direct contact between the U.S. and Taiwan governments. AIT Washington is a relic of the past whose continuing existence can no longer be justified. It needs to be buried.