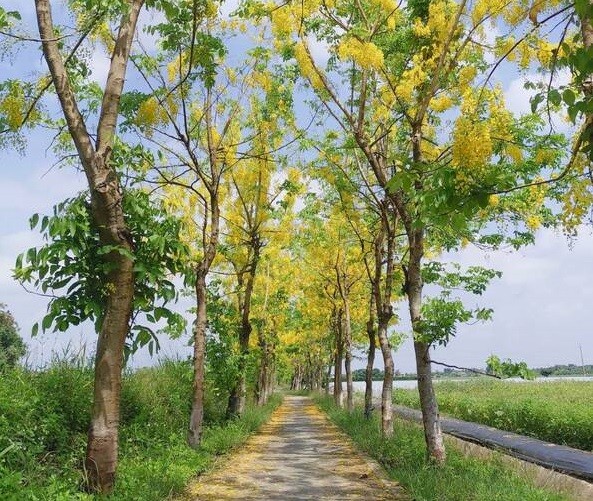 TAIPEI (Taiwan News) -- Tourism Bureau of Tainan City Government planted golden trees on both sides of Lian Xiang Bikeway (蓮鄉自行車道) in the city's Baihe (白河) District six years ago, and now the trees’ golden flowers are blooming during this season, which coincides with lotus flower season in the area.

Tainan’s Tourism Bureau director Chen Xin-an (陳信安) said the city chose to plant golden trees along Lian Xiang Bikeway in 2014 when the bikeway was being built. The trees bloom after the kapok trees in the area and fit in well with the outdoor activities of the lotus season.

After six years’ care, the golden trees blossomed this year, attracting many people to visit and take photos, Chen added.

The 1.2-kilometer Lian Xiang Bikeway connects Yufeng Green Tunnel (玉豐綠色隧道) and bikeways around Xiaonanhai (小南海). The bikeway also connects to Baihe’s downtown area to the south and Lotus Park (蓮花公園) to the north.

A pleasurable ride along the level bikeways in the countryside, admiring the flowers of both the golden trees and lotuses, along with their floral fragrances, awaits any and all visitors at this time.