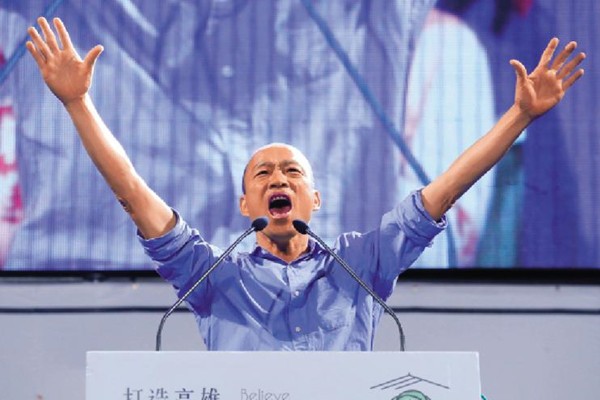 TAIPEI (Taiwan News) – At what is likely to be the venue for an official presidential campaign announcement, supporters of Kaohsiung Mayor Han Kuo-yu (韓國瑜) have organized a rally event to take place in Taipei on Ketagalan Boulevard in front of the Presidential Office Building on June 1.

On Saturday (May 25), Han announced through a Facebook post that he has accepted the invitation by event organizers. Han will make an address at the rally event next Saturday.

Over the past several months, Han has expressed only tepid interest in joining the Kuomintang (KMT) primary elections as a contender for a shot at the presidency, despite the obvious attempts of KMT party leaders to recruit him for the task.

The details surrounding the June 1 rally in Taipei, as reported by China Times, have all the markings of a presidential campaign launch event. Organizers are expecting attendance of 100,000 people.

In his Facebook post, Han declared that he would join the rally to “stand with supporters and express his feelings” towards his recent emotional journey, and the current political landscape in Taiwan. His post also declared that the 2020 presidential election would be a battle that would mean “life or death" for the country.

It was reported that a special song has been chosen to introduce Han at the event: “My future is not a dream” (我的未來不是夢) by Chang Yu-sheng (張雨生). UDN claims that the information regarding the song was leaked on ａ PTT message board.