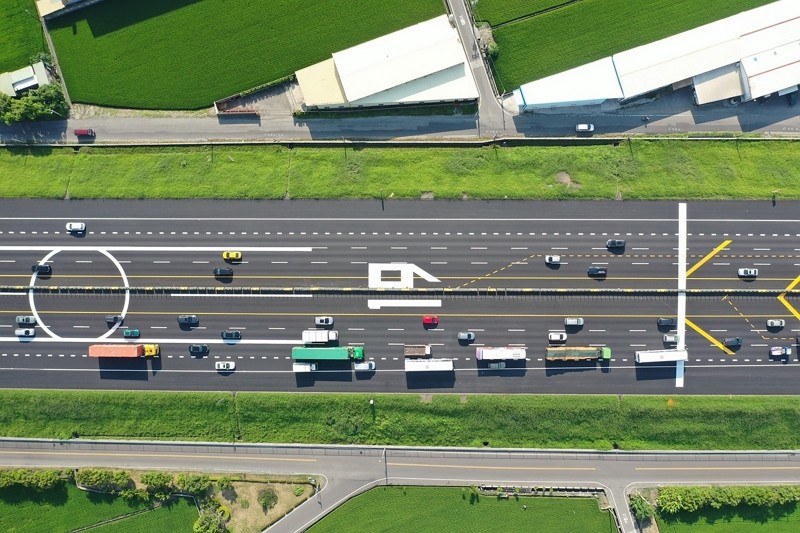 Fighter jets and other combat aircraft will use Taiwan's main highway as an emergency airstrip Tuesday (May 18), during this year's Han Kuang series of military exercises.

The aircraft will practice emergency take-offs and landings in the central county of Changhua, on the Huatan section of the main north-south National Freeway No. 1 that runs along the island's west coast. The aircraft drill will be part of a series of live-fire exercises staged over five days, starting on Monday.

The Han Kuang exercises, Taiwan's most important war games, are held each year to test the combat capabilities of all branches of the armed forces, in the face of a continued military threat from China.

The landing and takeoff drill is an important part of the combat training for the Air Force in the event of an attack by China, the Air Force said in a statement.

Currently, there are four sections of the main north-south freeway that are designated as emergency runways in the event of war --the Huatan section in Changhua, the Minxiong section in Chiayi, and the Madou and Rende sections in Tainan.

Over the years, the military had staged emergency aircraft takeoff and landing drills on each of the four sections, with the last one on the Huatan section being conducted 12 years ago.

To facilitate the Han Kuang exercises, the section of Freeway No. 1 between Changhua and Yuanlin will be closed from Sunday to Wednesday, said Peng Huan-ru (彭煥儒), a section chief in the Freeway Bureau.

In preparation for the drills, 1,375 median barriers, 111 street lights and 77 road signs will be removed from the Huatan section of the freeway, according to the bureau.

Each emergency runway on the freeway is nearly three kilometers long, Peng said, adding that road maintenance, including resurfacing, has been carried out on the freeway in preparation for the exercises.

Three of the main fighter aircraft models in Taiwan's military -- the F-16 A/B, Mirage 2000-5 and Indigenous Defensive Fighter (IDF) - will take part in the drill, along with the E-2K airborne early warning aircraft, according to the Air Force.

Meanwhile, the annual Wan-an air-raid drills will begin Monday, with the first one scheduled for 1:30 p.m. to 2:00 p.m. in northern Taiwan, the Ministry of National Defense (MND) said.

On Monday, the 30-minute drill will be carried out in Taipei City, New Taipei City, Taoyuan City, Hsinchu City and County, Keelung City, and Yilan County, the MND said.

On Thursday, the drill will be held in the island county of Penghu and in the central Taiwan areas of Taichung, Changhua, Nantou, and Yunlin, as well as in Chiayi.

During the drills, pedestrians will be required to get off the streets and seek shelter, while vehicles will have to pull aside and stop, in keeping with the instructions of police, military, and evacuation personnel, according to the MND.

The system for the air raid alert, which was developed last year and tested on a small scale during the Wan An drills in central and southern Taiwan, has been expanded, the ministry said. As result, text messages will be sent this year to all mobile phones nationwide, warning of an incoming missile attack, the MND said.

The defense ministry has warned that failure to observe the evacuation regulations and other relevant procedures will result in a fine of between NT$30,000 (US$952) and NT$150,000.