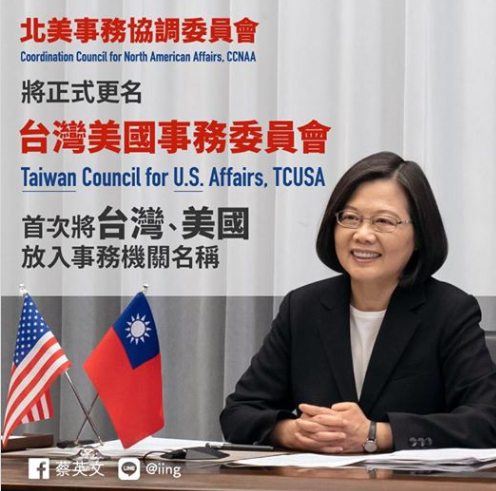 TAIPEI (Taiwan News) – The organization which Taiwan set up to manage ties to the United States after the two countries ended official diplomatic relations in 1979 has changed its name from Coordination Council for North American Affairs (CCNAA) to Taiwan Council for U.S. Affairs (TCUSA), reports said Saturday (May 25).

Writing on her Facebook page, President Tsai Ing-wen (蔡英文) welcomed the development as the latest example of progress in relations with the U.S.
The new name was the result of a consensus between the two countries, with the president thanking all Ministry of Foreign Affairs staff who had worked hard to achieve the change, the Liberty Times reported.

Under the Taiwan Relations Act approved by the U.S. after the 1979 break, Washington set up the American Institute in Taiwan (AIT) to maintain ties with the island, while Taiwan formed the CCNAA.

The use of the term “North American” in the name was due to the political and diplomatic circumstances of the time, Tsai wrote.

On the occasion of the 40th anniversary of the Taiwan Relations Act and of AIT, the latter’s Taiwanese counterpart finally received its real name, according to the president. This was also the first time that the terms “Taiwan” and “U.S.” appeared in one organization’s name together, symbolizing the improved level of trust between both sides, she pointed out.