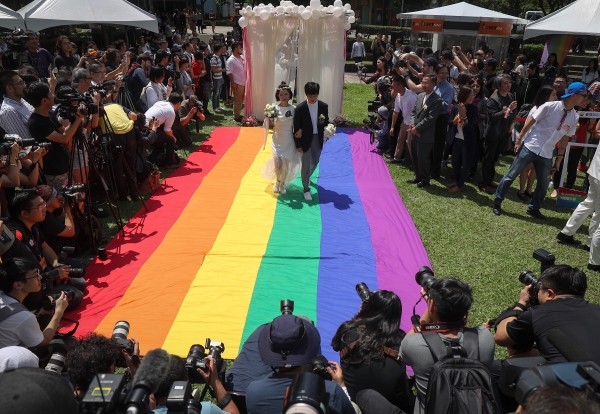 TAIPEI (Taiwan News) -- As hundreds of same-sex couples married legally for the first time in Taiwan today (May 24), a South African woman became the first foreigner legally joined in Taiwan as a same-sex spouse, thus qualifying her for a family alien resident certificate (ARC).

The National Immigration Agency (NIA) said that the South African woman came to Taiwan about a year ago on a work visa to be able to stay in the country with her Taiwanese girlfriend. When they heard the news that same-sex marriage had officially been legalized, they rushed to make an appointment to register at the Taipei City Service Center.

At 10 a.m. this morning, the couple officially registered at the Taipei City Service Center, marking the first legal same-sex marriage between a Taiwanese citizen and a foreign national in history. Immediately after their official registration, the couple went to the Household Registration Office to enable the South African woman to apply for a family ARC.

In order to avoid affecting their work and personal lives, the couple chose to keep their identities anonymous. The South African woman did say that she was pleased to have finally completed a major life-changing event with her partner and that they felt both happy and excited, reported China Times.

According to the provisions of Taiwan’s same-sex marriage law, titled Enforcement Act of Judicial Yuan Interpretation No. 748, which was passed by the Legislative Yuan on May 17 and was enacted today, same-sex spouses from the following 26 countries and regions can apply for family ARCs after marriage to a Taiwanese citizen: The Netherlands, Belgium, Spain, Canada, South Africa, Norway, Sweden, Portugal, Iceland, Argentina, Denmark, Brazil, France, Uruguay, New Zealand, Luxembourg, the United Kingdom, the United States, Ireland, Colombia, Mexico, Finland, Malta, Germany, Australia, and Austria.

All county and city NIA service centers can now accept marriage registrations of same-sex couples and applications for residence visas.

For those who have any questions about the process, they can contact their local NIA service center from 8 a.m. to 5 p.m. or visit the NIA's official website.