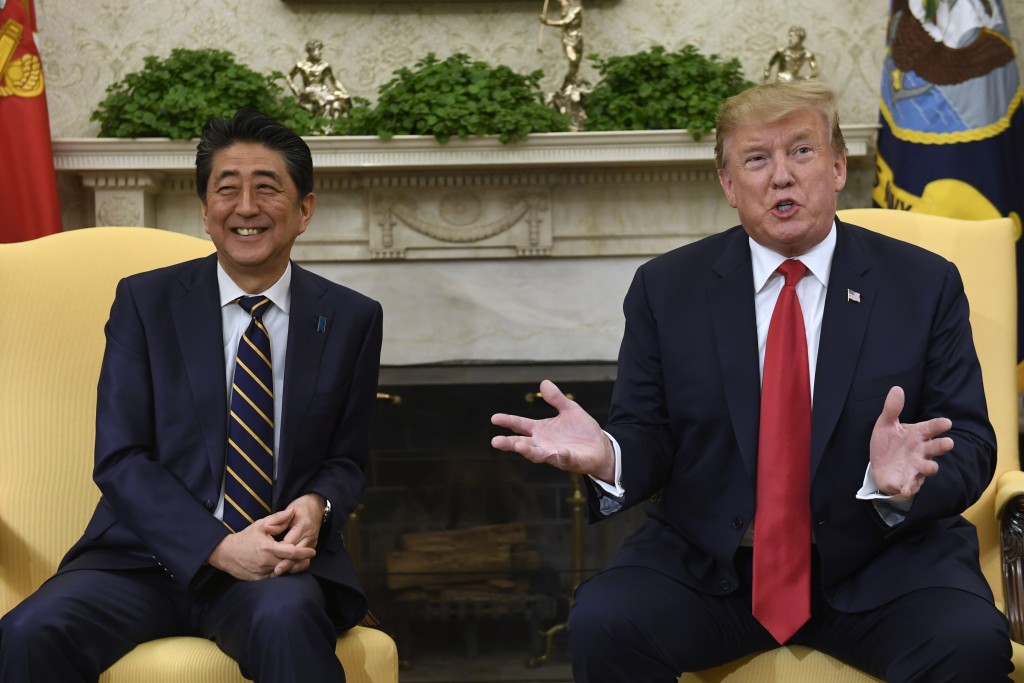 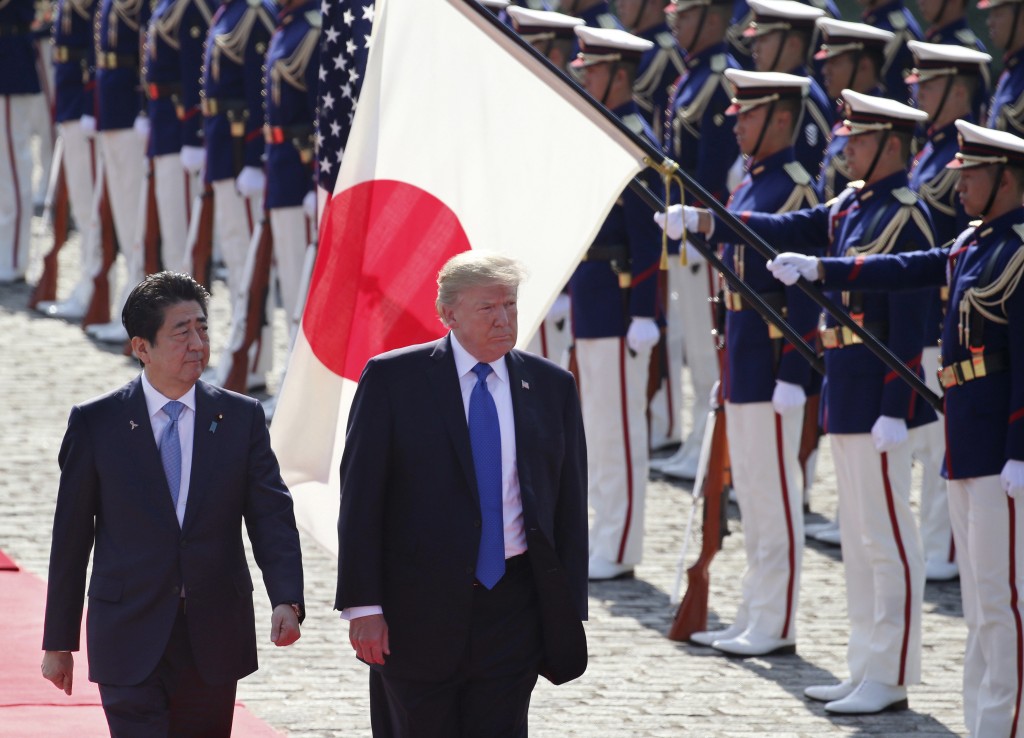 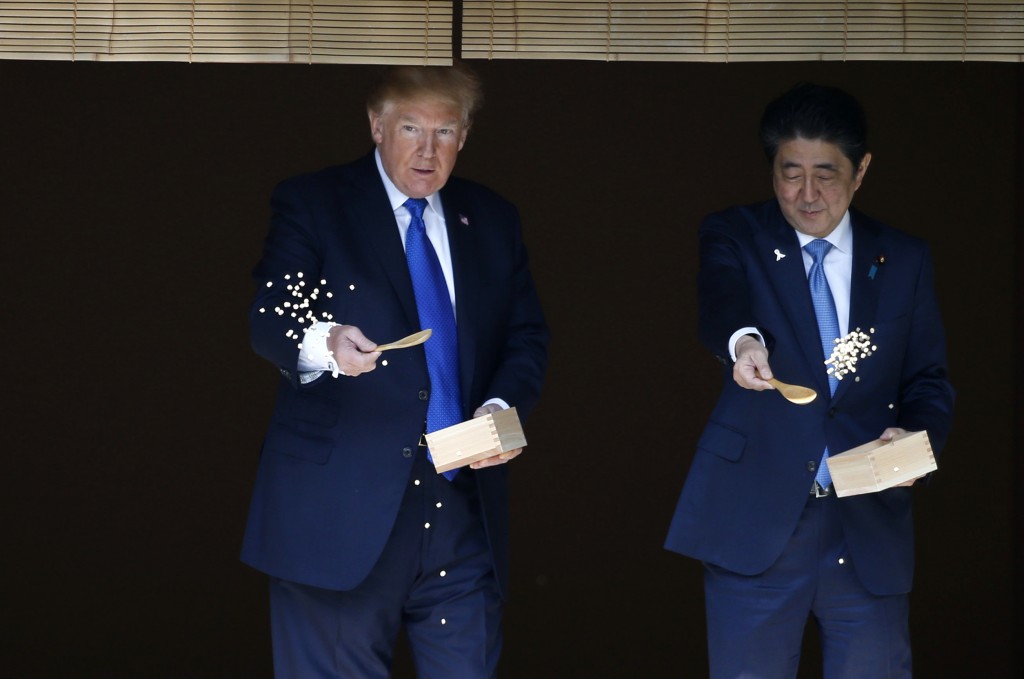 TOKYO (AP) — President Donald Trump will be treated to an imperial banquet, a round of golf and a ringside view of a sumo match during his state visit to Japan as Prime Minister Shinzo Abe focuses on personal ties rather than substantive results on trade, security or North Korea.

The schedule for the U.S. leader this weekend is full of hospitality and entertainment. Trump and Abe will play a round of golf — their fifth — Sunday, joined by professional golfer Isao Aoki, whom the president has praised. Then the two leaders and their wives will watch sumo together in the evening before a restaurant dinner.

Trump and first lady Melania will be invited to a French dinner at the palace Monday hosted by Emperor Naruhito and his wife Masako, a Harvard-educated former diplomat. Trump will be the first foreign leader to be Naruhito's guest since his May 1 succession to the Chrysanthemum Throne.

Trump and Abe are to discuss trade, North Korea, security and possibly space cooperation at Monday's summit, but no significant outcome is expected and a joint statement may not be issued, Japanese officials said.

Trump's visit comes a month after Abe's trip to Washington and they will meet again in June when Japan hosts a Group of 20 summit in Osaka, the trio of meetings in three months underscoring a closer-than-ever relationship between the leaders.

"The main theme is building on the close personal ties between the two leaders to demonstrate the importance of the U.S.-Japan relationship, not only to the national interest of the two countries but to the region as a whole," said Nicholas Szechenyi, a Japan expert at the Center for Strategic and International Studies. "The symbolism behind this trip is all about suggesting that the U.S. is going to maintain its commitment to allies in Asia and its interest in Asia."

No major development is expected on trade as Abe doesn't want to take any risk ahead of a parliamentary election this summer, Japanese officials and ruling lawmakers say. The two leaders are expected not to focus on differences and reaffirm speeding up their talks despite uneasiness over Trump's threat to impose Section 232 national-security-based tariffs on Japanese autos.

U.S. Trade Representative Robert Lighthizer is expected to meet his Japanese counterpart, Economy Minister Toshimitsu Motegi, ahead of the summit.

The two sides will also discuss North Korea following its recent missile firings, a concern for Japan that Abe wants Trump to share, though those short-range missiles are not seen threats to America. They are also expected to discuss how Abe can have his own bilateral summit with North Korean leader Kim Jong Un and discuss Japanese nationals abducted to the North decades ago. Trump, who has shown sympathy to the victims, will meet the abductees' relatives Monday.

For Abe, the purpose of the summit also is "showing that nobody works better with this president or the United States than Japan," said Michael Green, senior vice president for Asia and Japan chair at the CSIS. That's an important signal to China and the region, as well as to Europe, Canada and other countries, he said.

After playing golf, Trump will watch sumo and present a trophy, dubbed "Trump Cup," to the winner Sunday, the final day of the 15-day Grand Sumo Tournament, becoming the first U.S. president to do so.

While Japanese officials say his presence at the sumo tournament will help promote Japanese culture, they will allow him to break sumo spectators' tradition. At the Kokugikan arena, Trump is to use a chair instead of sitting Japanese style on a "zabuton" mattress on the floor at "masu seki" box seats reserved for him near the ring. He may keep his shoes on and put plastic covers over them, in part due to security reasons, officials said.

Hundreds of seats are set aside for Trump and Abe, and sales of canned beer or serving of tea pots and cups at box seats may be banned for safety. Officials have to watch out for stray mattresses hitting Trump since spectators customarily throw them to cheer a wrestler's victory against his senior opponent.

Officials, however, say there is no way to prepare for Trump tweeting or speaking of details not intended for disclosure. Trump last year said he was honored to be invited to a ceremony for the new emperor before Japan's government said anything about it. Earlier this year, Trump said Abe recommended him for the Nobel Peace Prize for his diplomatic effort with North Korea, though Abe has never clearly acknowledged making such a recommendation.