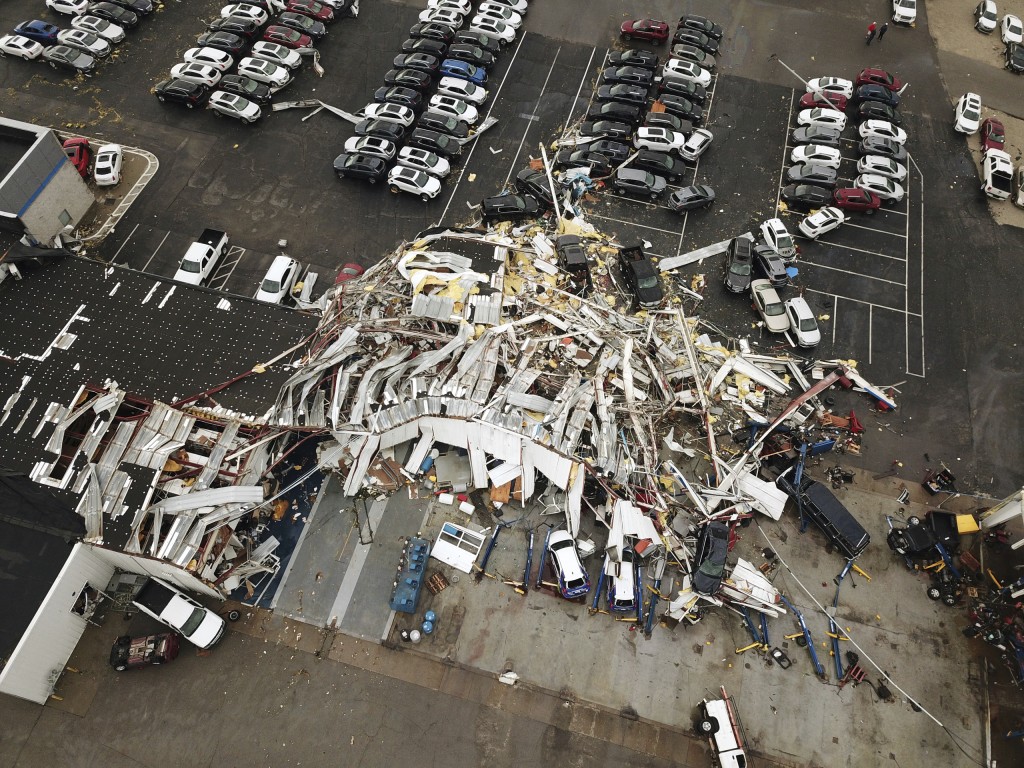 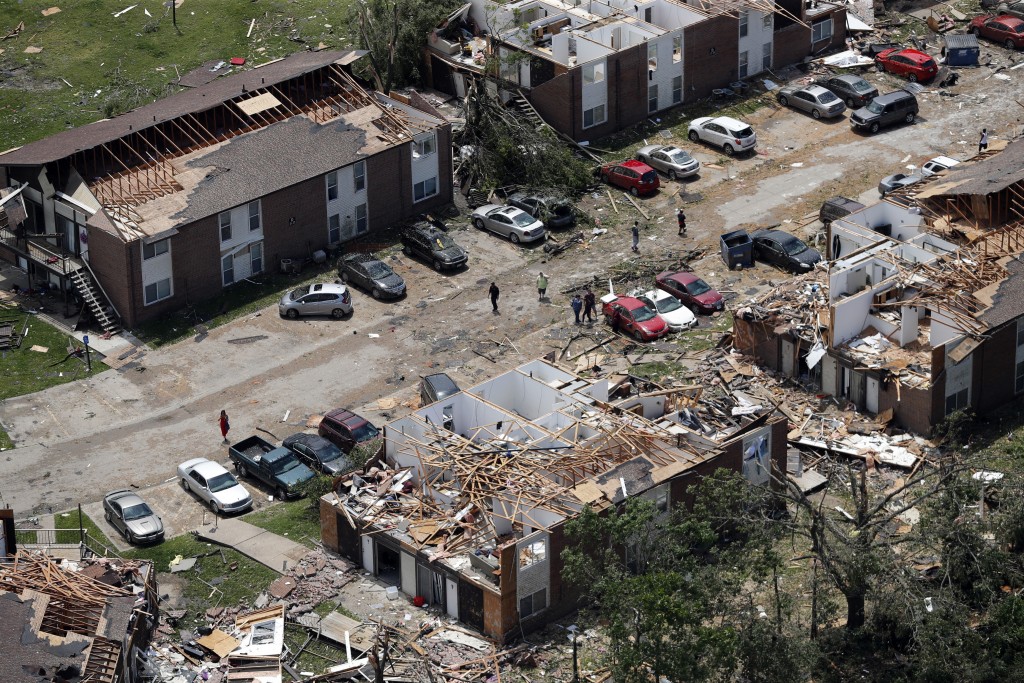 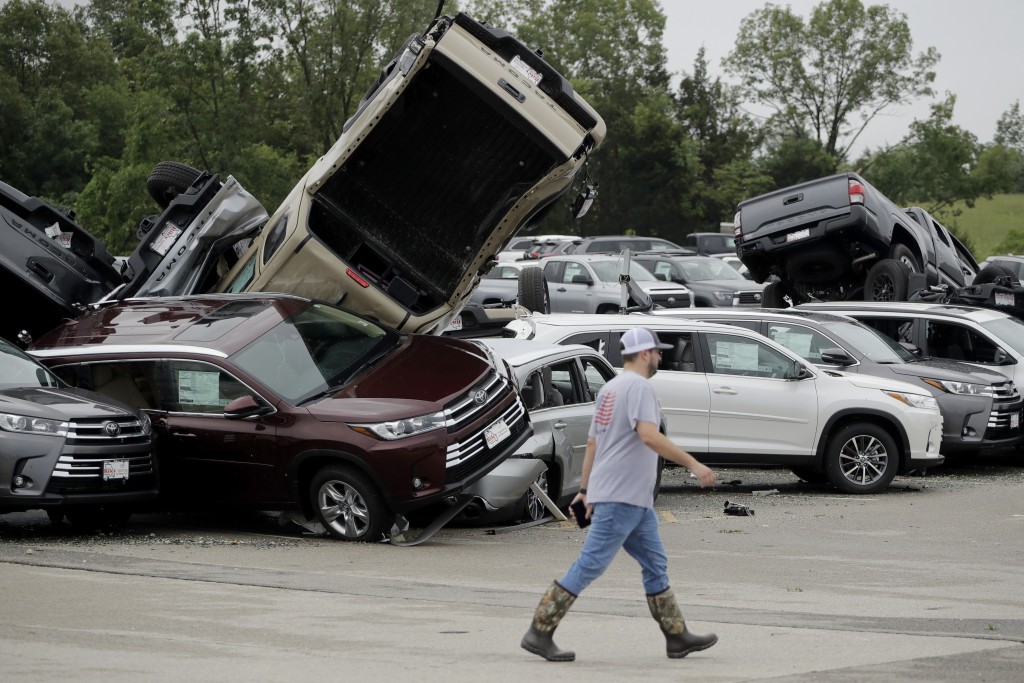 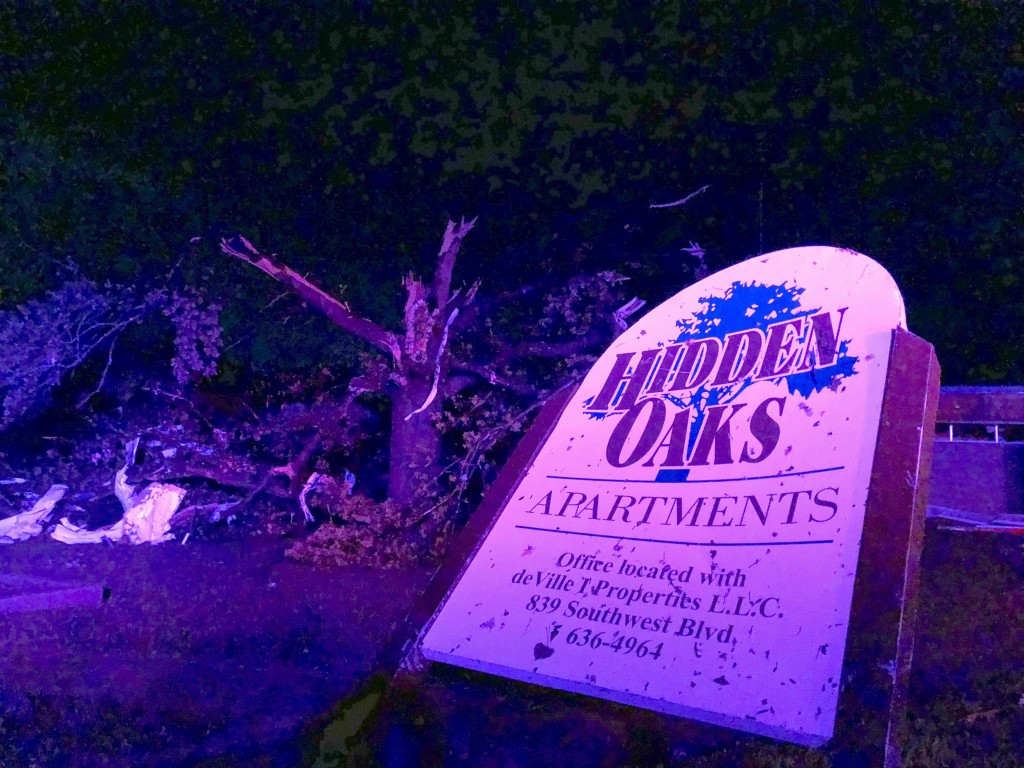 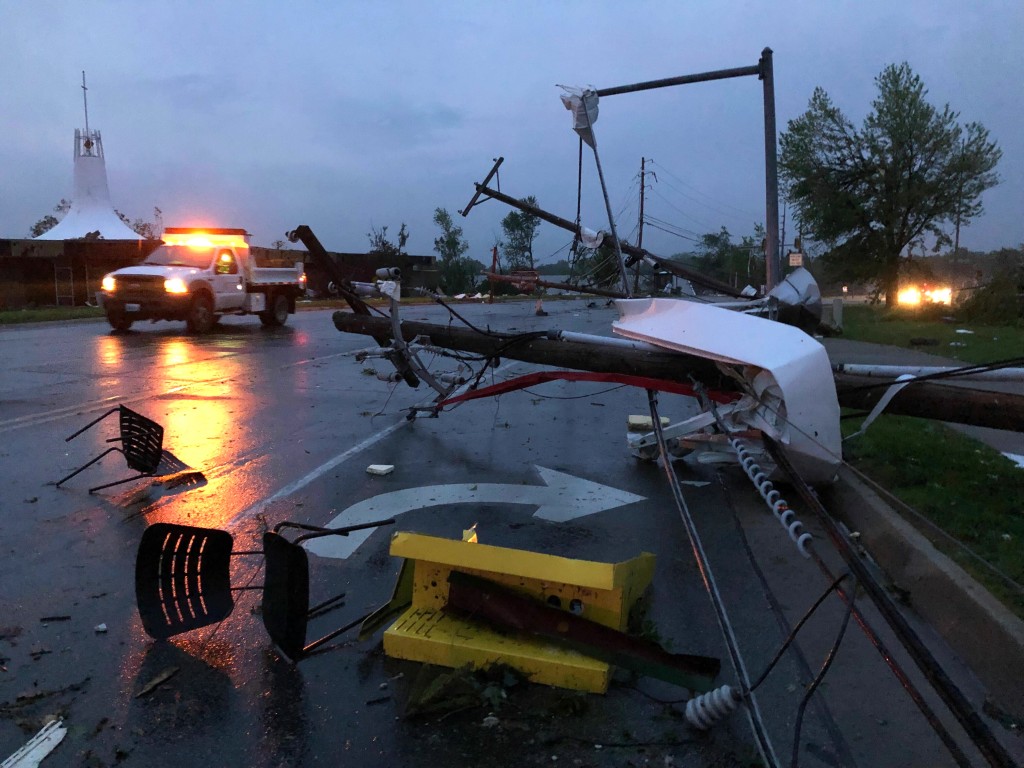 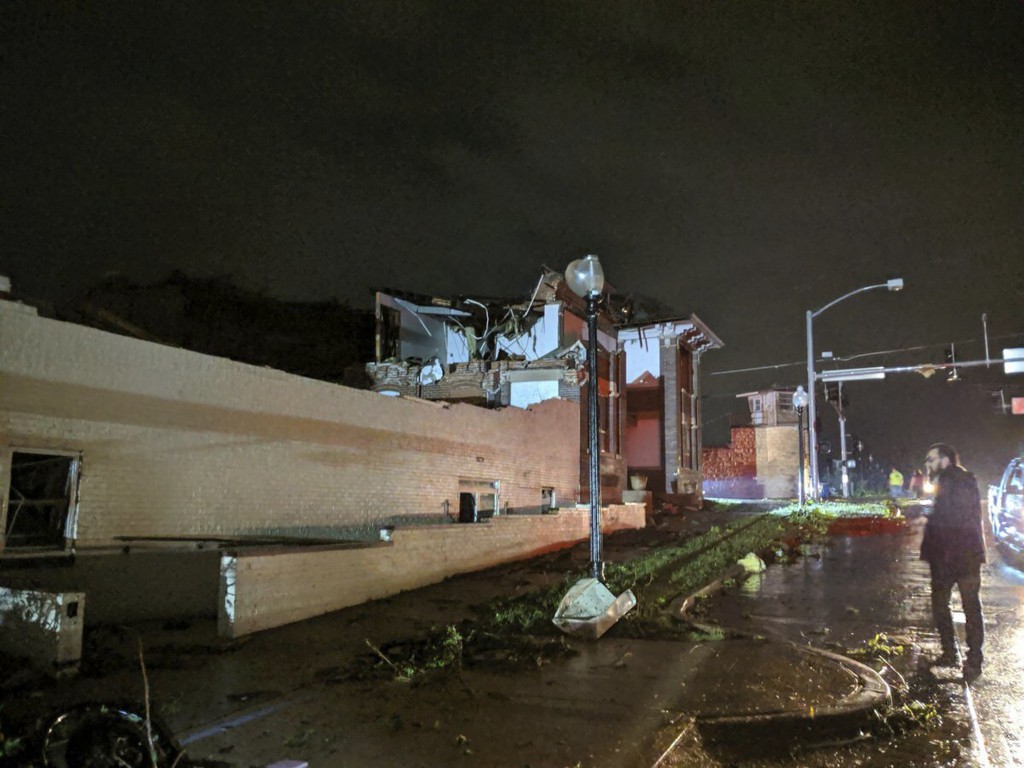 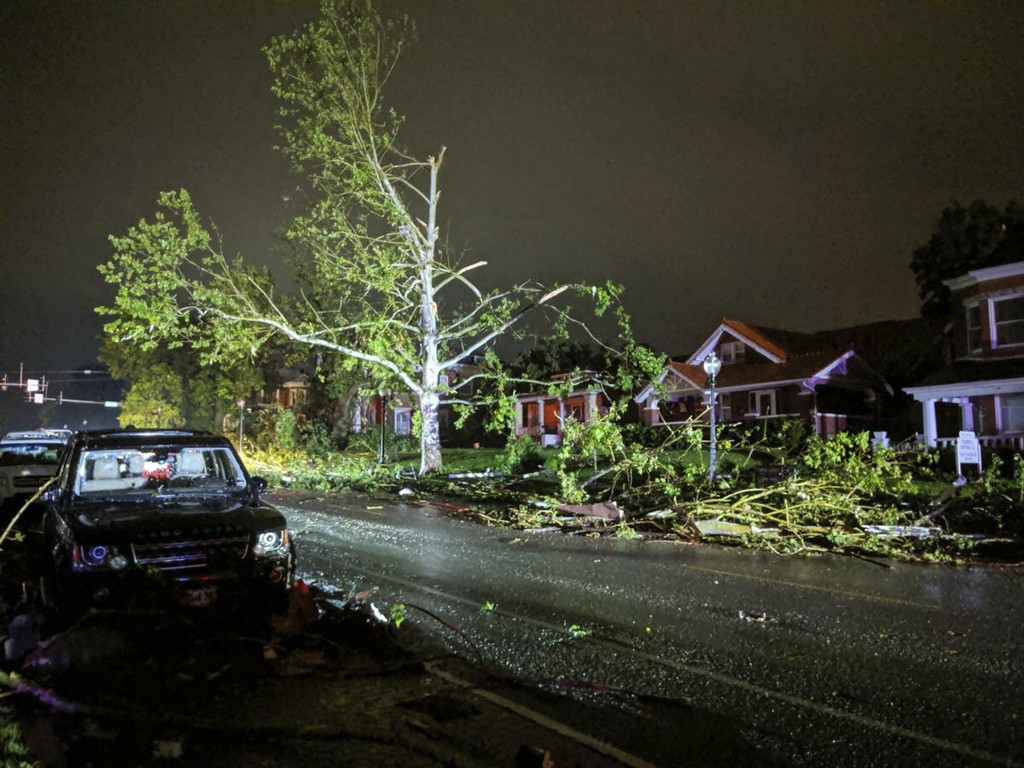 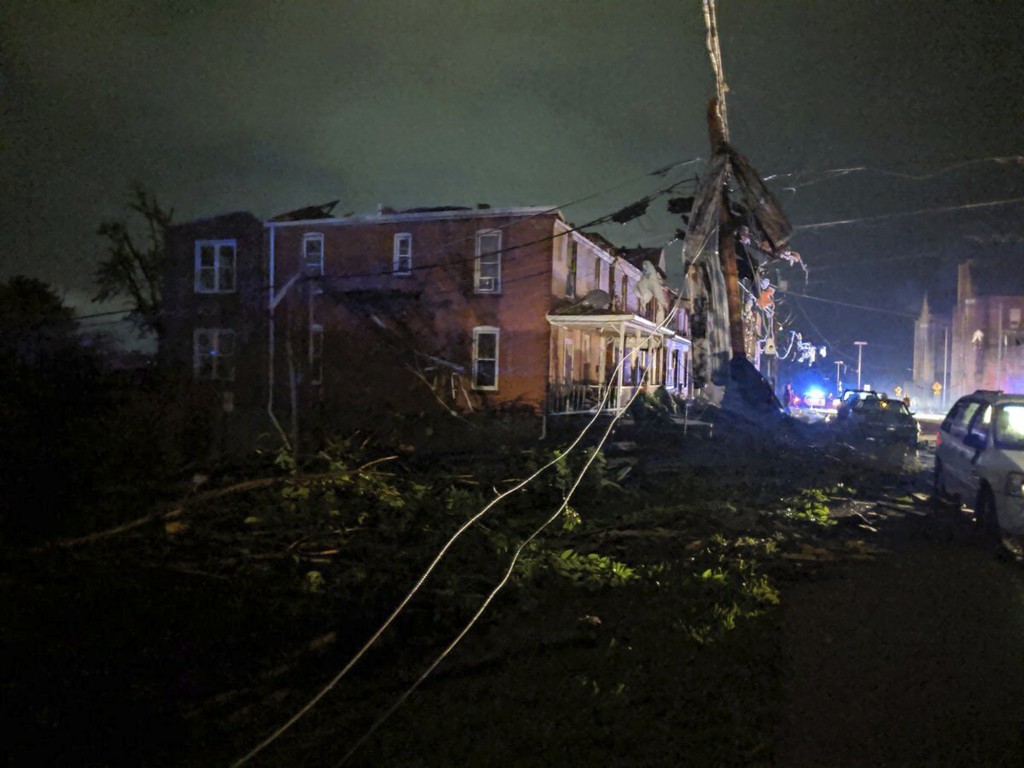 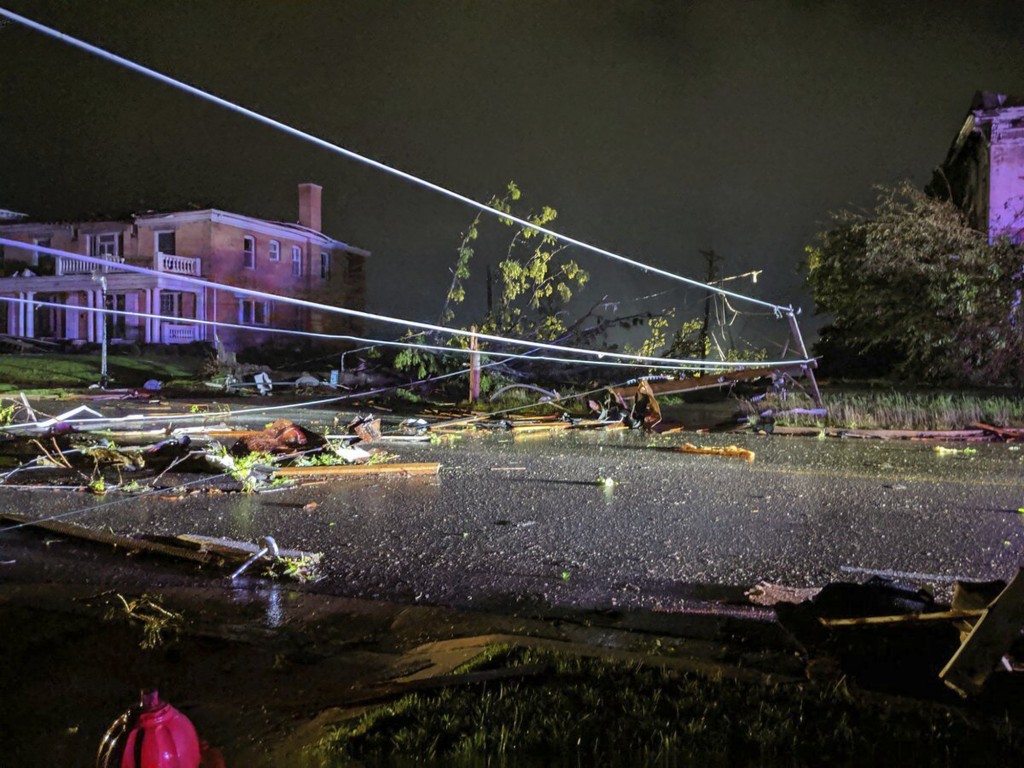 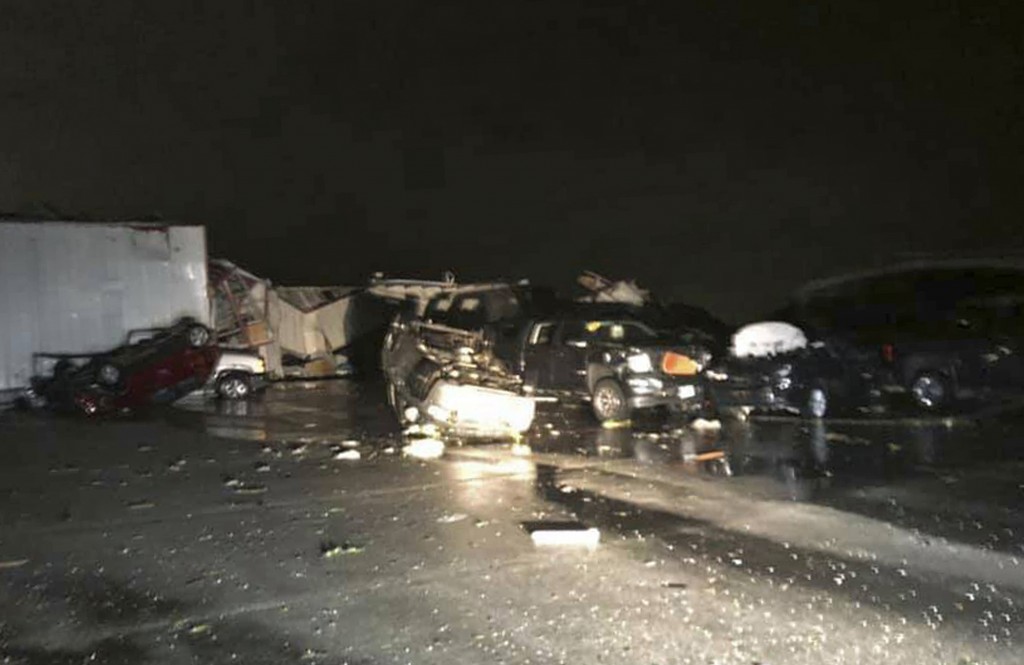 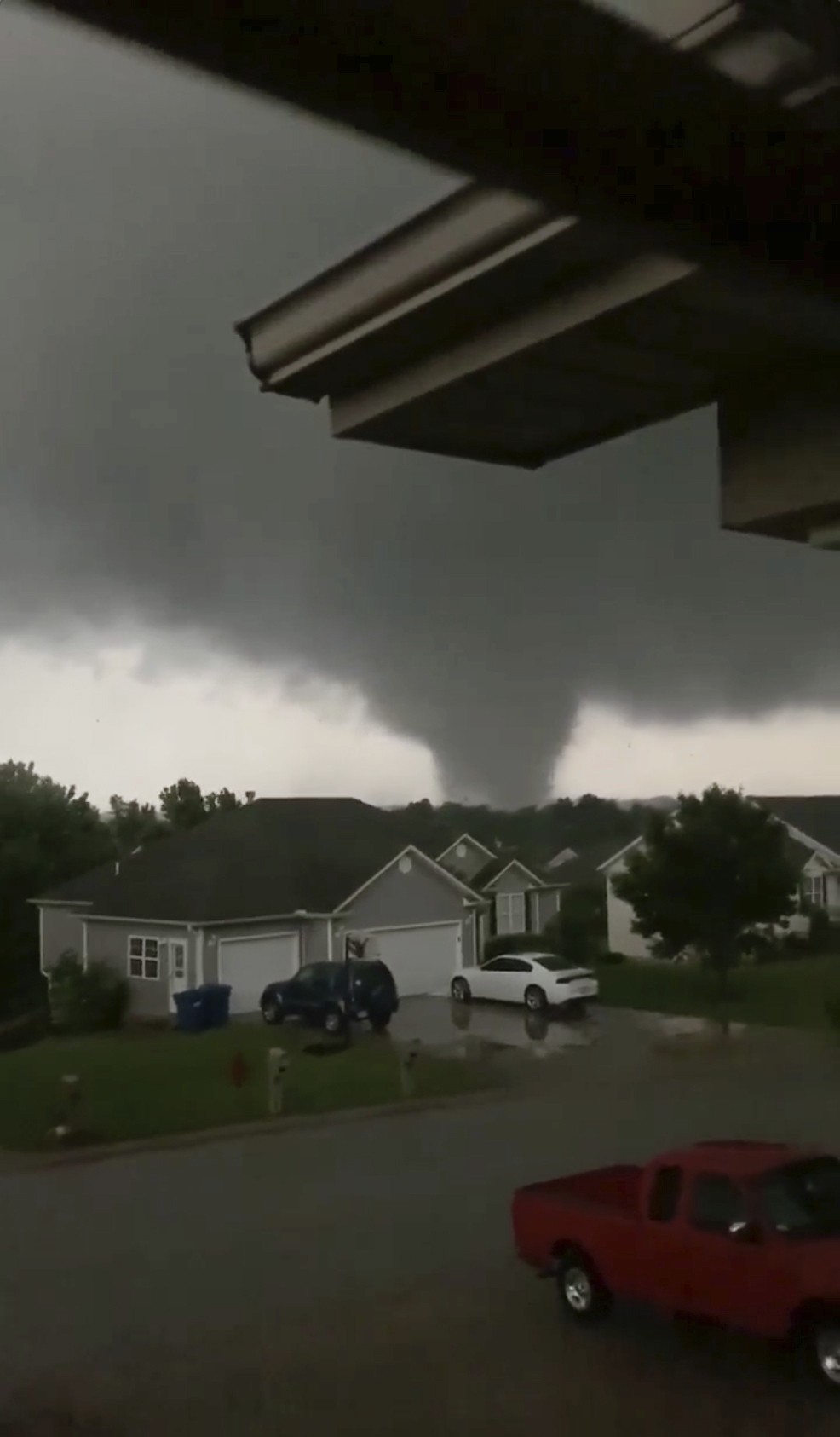 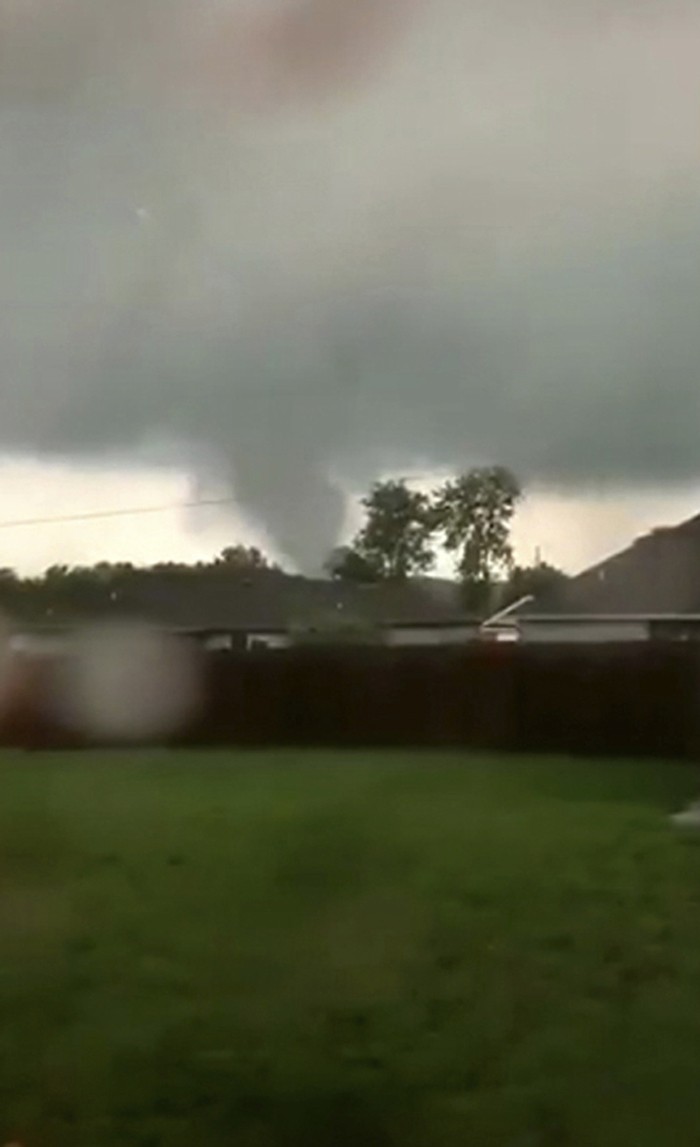 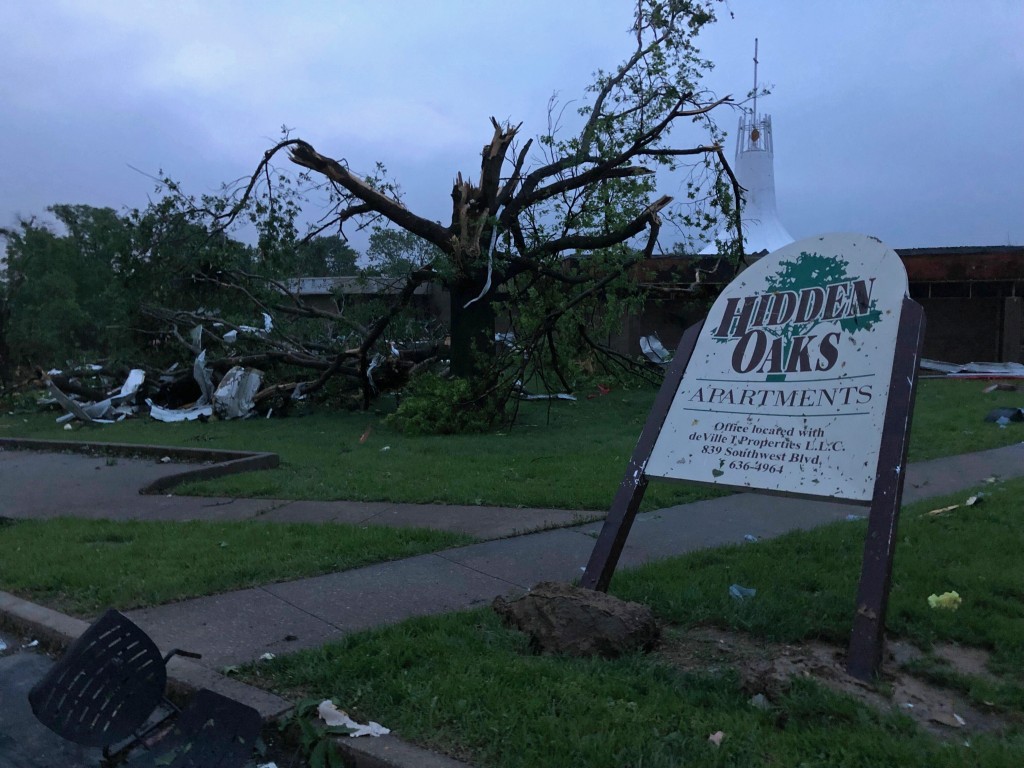 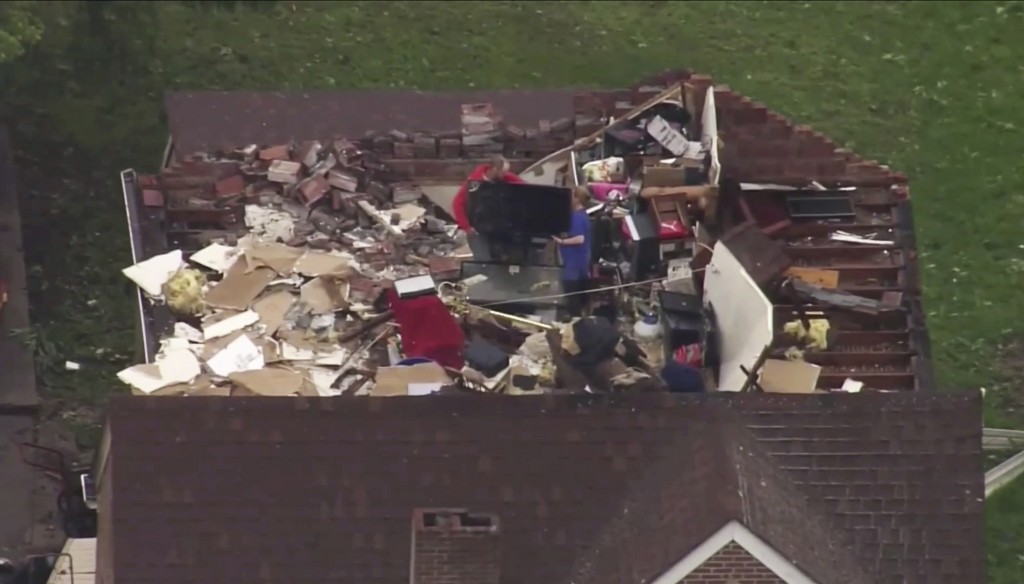 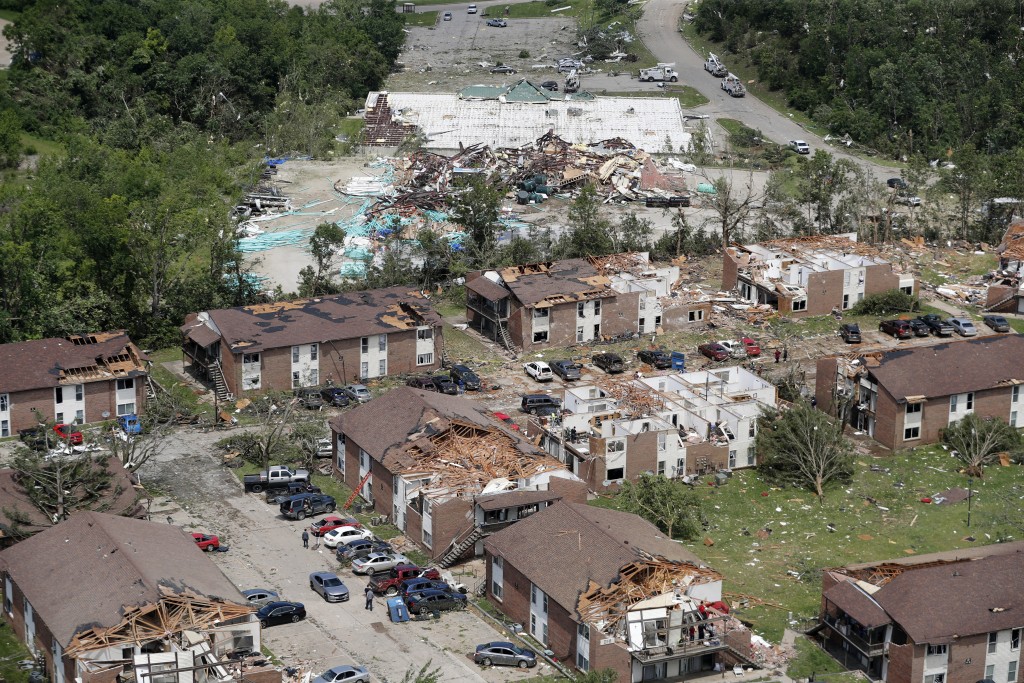 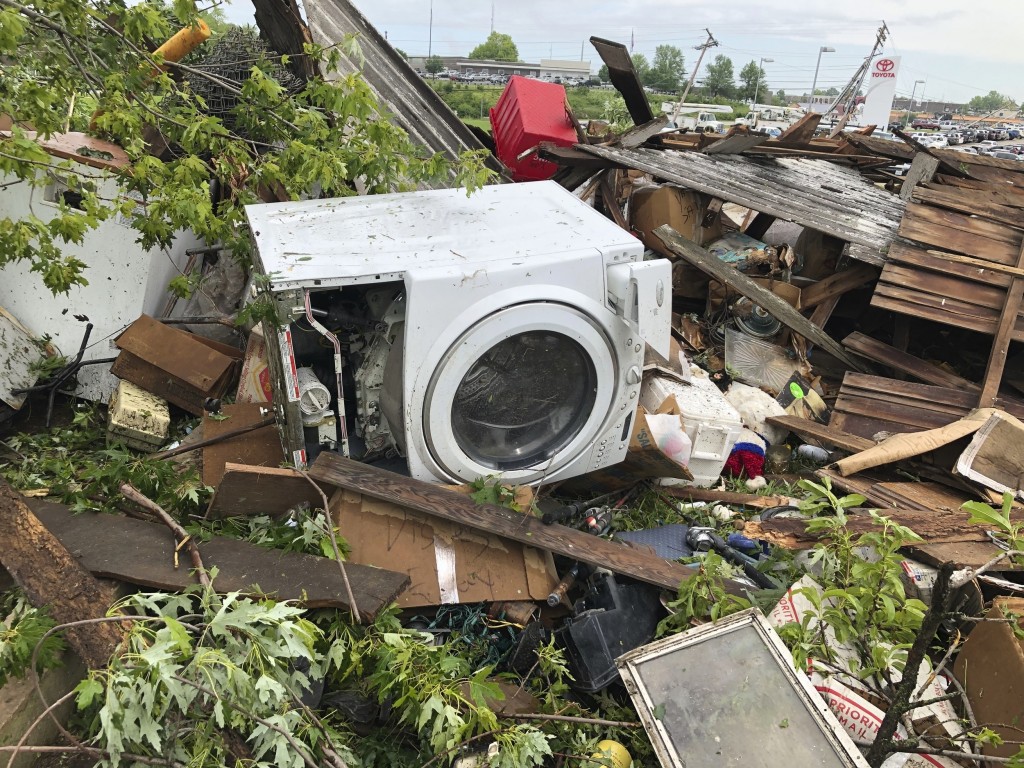 JEFFERSON CITY, Mo. (AP) — An outbreak of nasty storms in the Midwest spawned tornadoes that razed homes, flattened trees and tossed cars across a dealership lot, injuring about two dozen people in Missouri's capital city and killing at least three others elsewhere in the state.

The National Weather Service confirmed that a large and destructive twister moved over Jefferson City shortly before midnight Wednesday.

Officials said the tornado packed winds of up to 160 miles per hour (257.48 kilometers per hour) and cut a path about 3 miles (4.83 kilometers) long and a mile (1.6 kilometer) wide. Emergency workers reported about two dozen injuries but no fatalities in the city of about 40,000 people.

For the fourth consecutive day, tornadoes strafed the middle of the country Thursday, this time concentrated in sparsely populated panhandles of Oklahoma and Texas. The weather service received reports of more than a dozen tornadoes, along with numerous reports of large hail and torrential rain.

Storms this week in the central U.S. have left at least seven people dead, including three near Golden City, Missouri.

Kenneth Harris, 86, and his 83-year-old wife, Opal, were found dead about 200 yards (180 meters) from their home, and Betty Berg, 56, was killed and her husband, Mark, seriously injured when their mobile home was destroyed, authorities said.

While forecasters said the threat of severe weather would ease Friday and into the weekend, another natural disaster could be imminent in Jefferson City. Most of the city, including the tornado-ravaged section, sits on a bluff overlooking the south side of the Missouri River. The swollen river is projected to top a levee on the north side of the river by Friday, potentially flooding the city's airport, which already has been evacuated.

Many in Jefferson City considered themselves fortunate to survive the tornado.

David Surprenant watched the storm approach then rushed to join his family in the basement. By then, the windows had started shattering and the pressure dropped.

"It was just the eeriest sound ever, and it felt like it was taking your breath right out of you," Surprenant, 34, said. He and his family were unharmed.

Kerry Ann Demetrius locked herself in the bathroom of her Jefferson City apartment as the storm approached.

"It sounded like stuff was being thrown around, everything was just banging together, and then it just went dead silent," she said. She emerged to find the roof had been blown off her apartment building.

The National Weather Service said preliminary information indicates the tornado at Jefferson City was an EF-3, which typically carry winds up to 160 mph (260 kph).

The severe weather moved in from Oklahoma, where rescuers struggled to pull people from high water.

Flood waters along the Arkansas River could approach or surpass record levels for about 120 miles (193 kilometers) from Tulsa, Oklahoma, to Fort Smith, Arkansas. More than 1,000 homes have been damaged and 35 to 40 highways closed by flood waters in Oklahoma, Gov. Kevin Stitt told reporters Thursday evening.

The heavily traveled Interstate 40 bridge over the Arkansas River at Webbers Falls, Oklahoma, reopened after a dam escaped major damage when a pair of loose barges rammed into it.

The barges, carrying a total of about 3,800 pounds (1,700 kilograms) of fertilizer, broke loose Wednesday and floated down the swollen river. They eventually hit the dam and sank, causing only "minimal damage," The Army Corps of Engineers said.

A twister also caused damage and several injuries in the town of Carl Junction, not far from Joplin, on the eighth anniversary of the catastrophic tornado that killed 161 people in that city. Police Chief Delmar Haase said nearly three dozen homes had significant damage and several people sustained minor injuries.