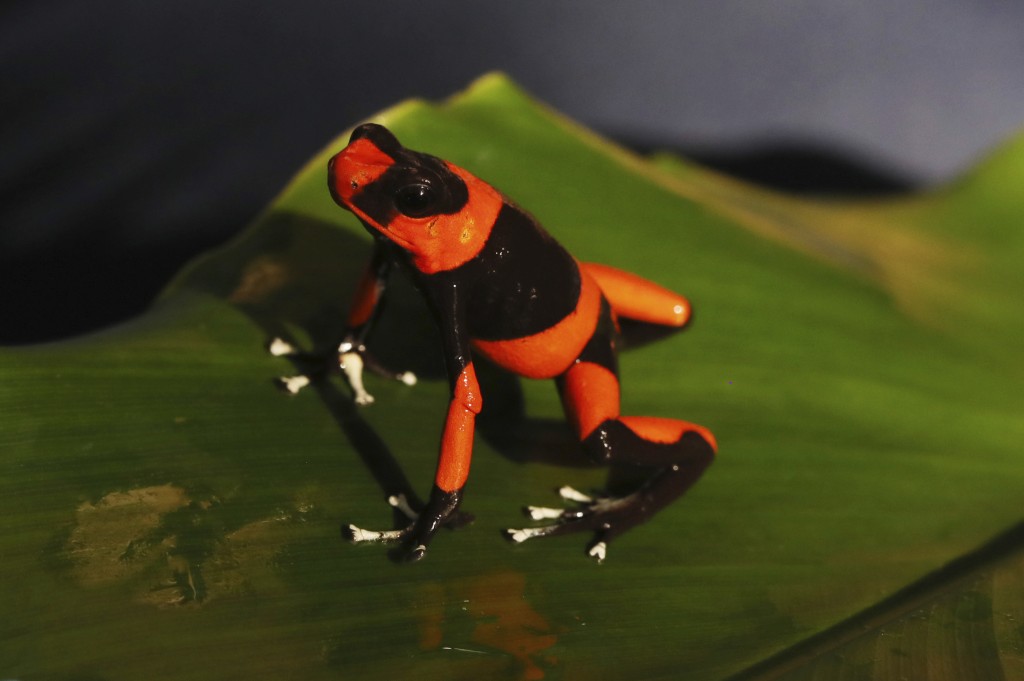 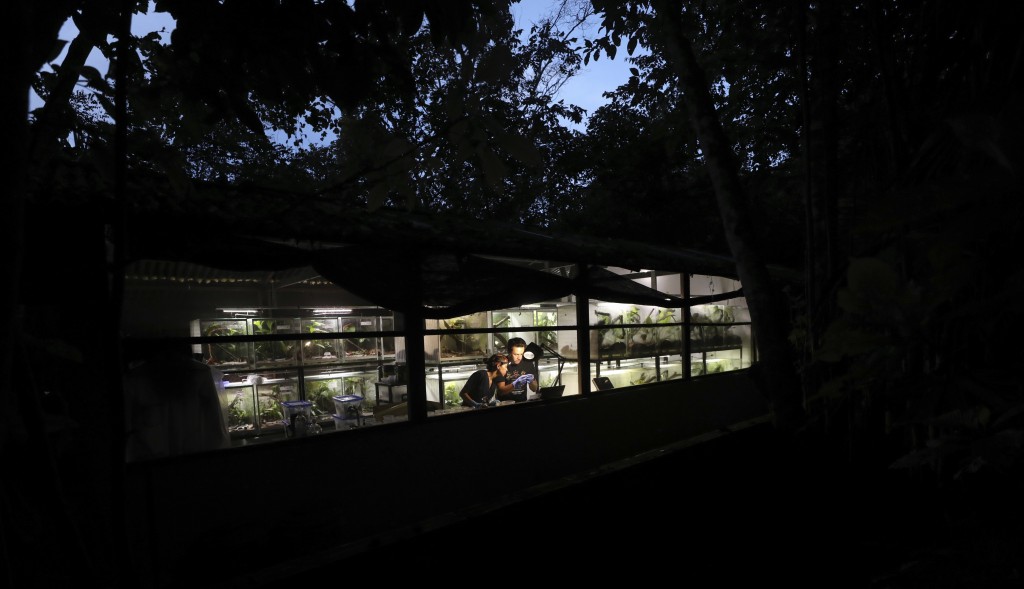 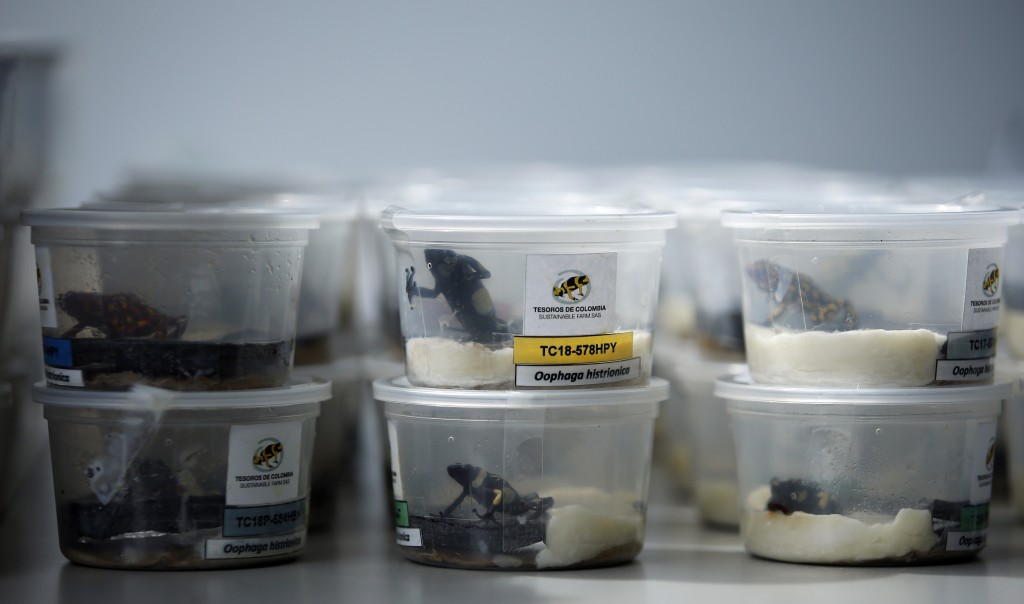 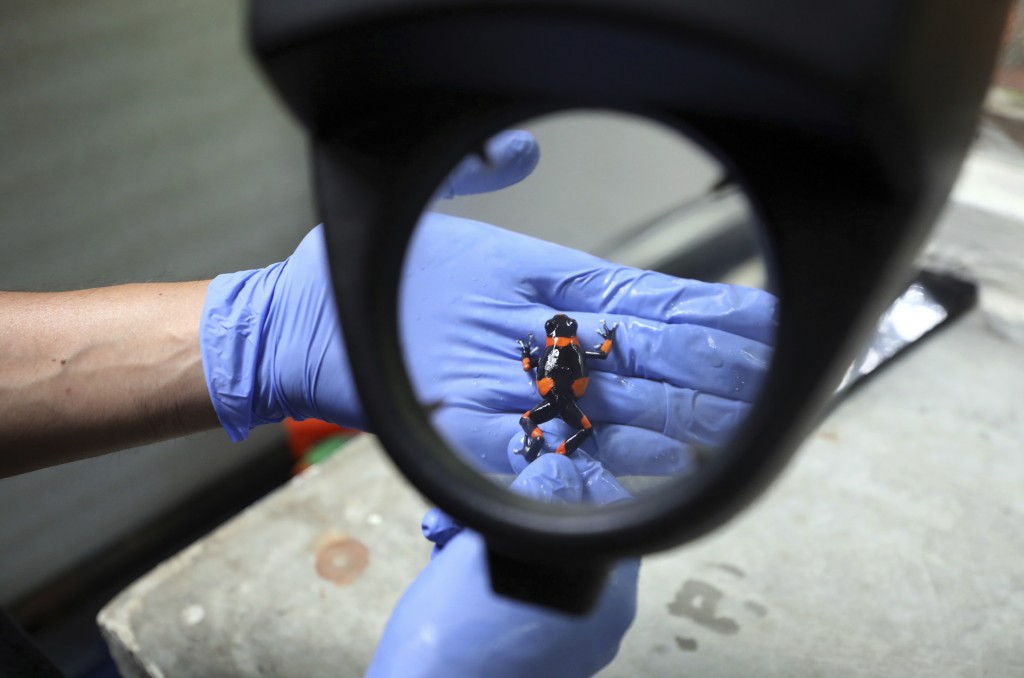 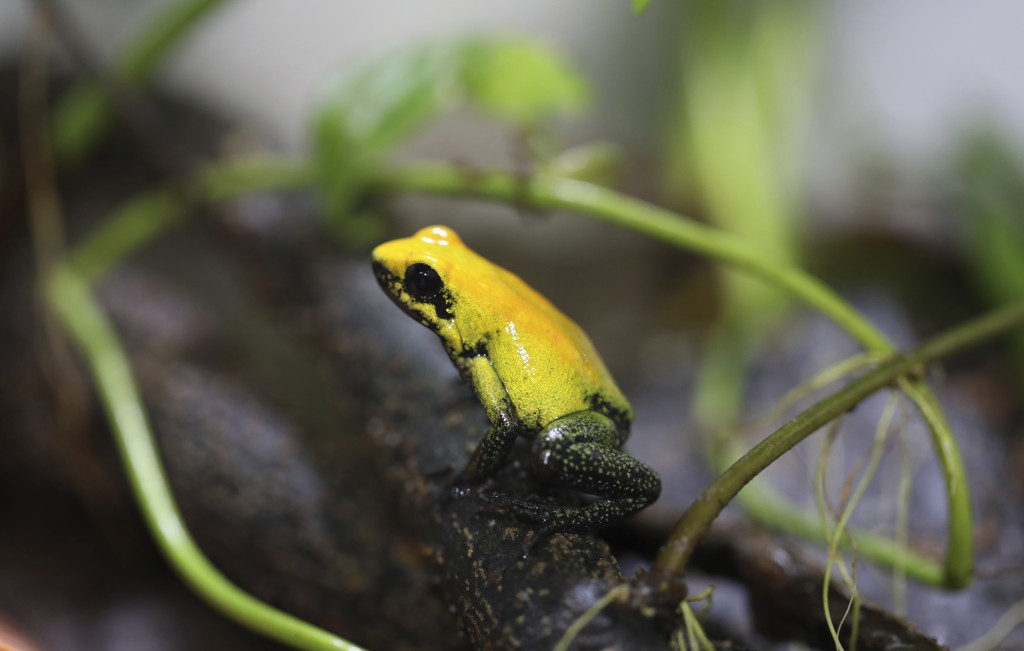 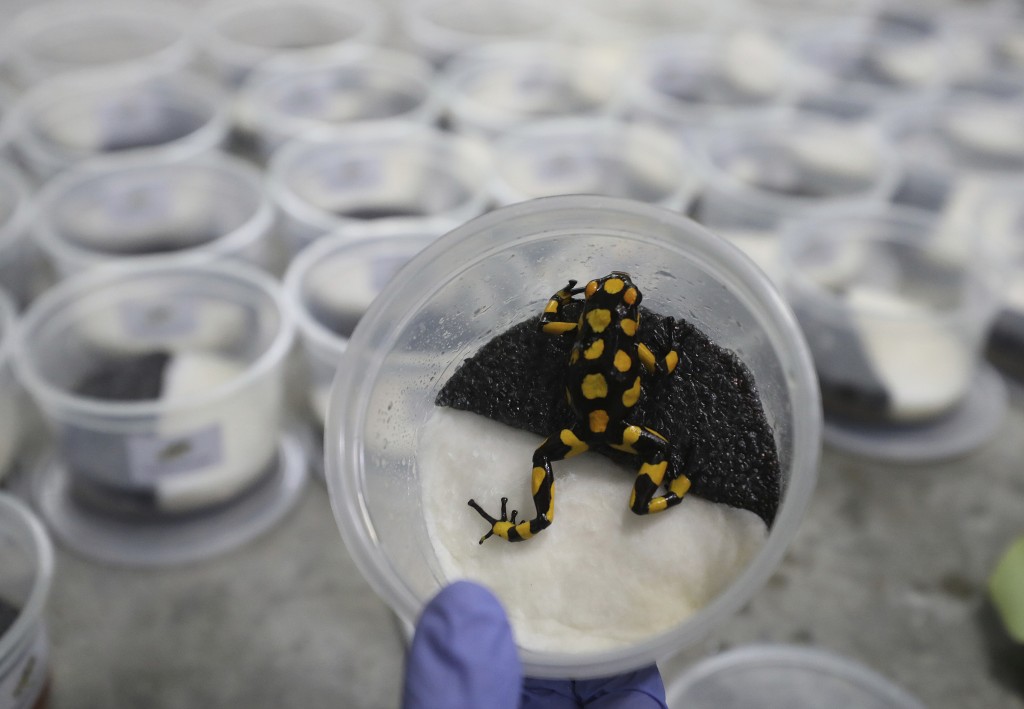 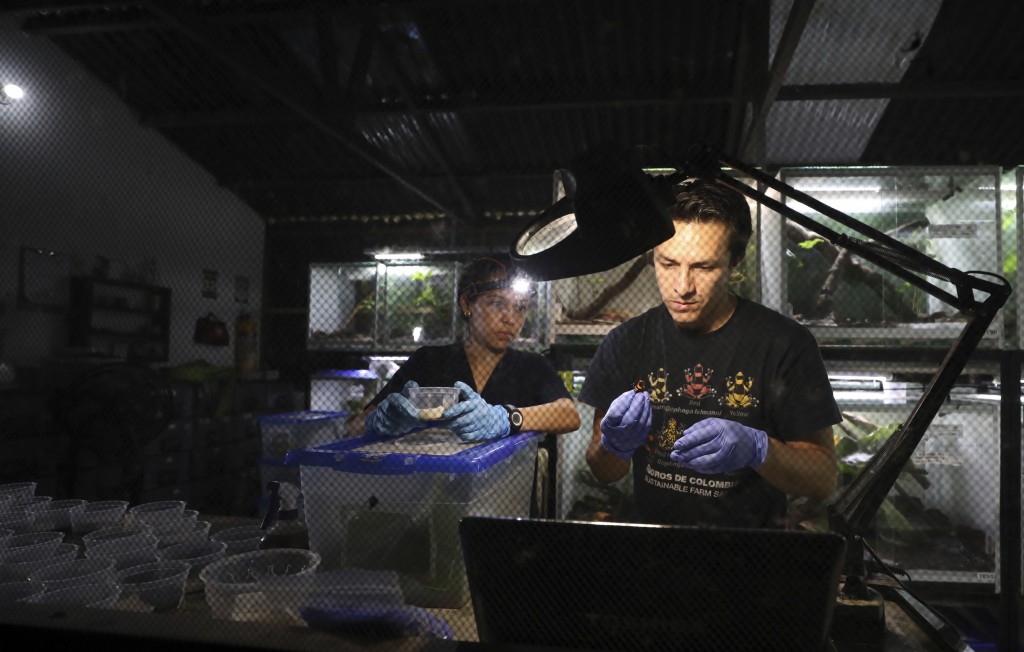 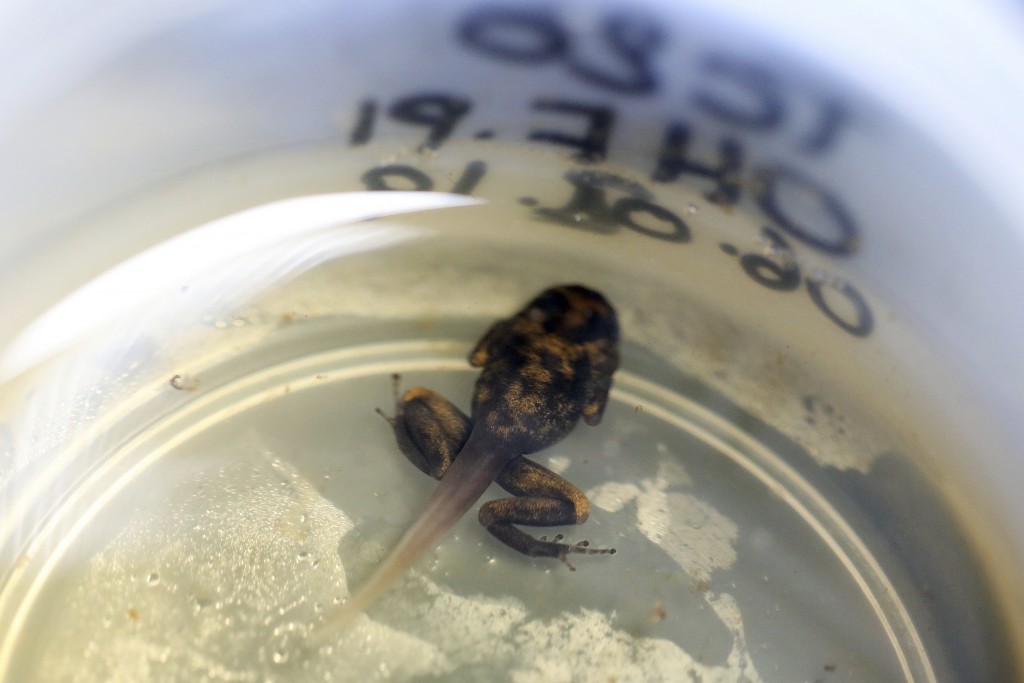 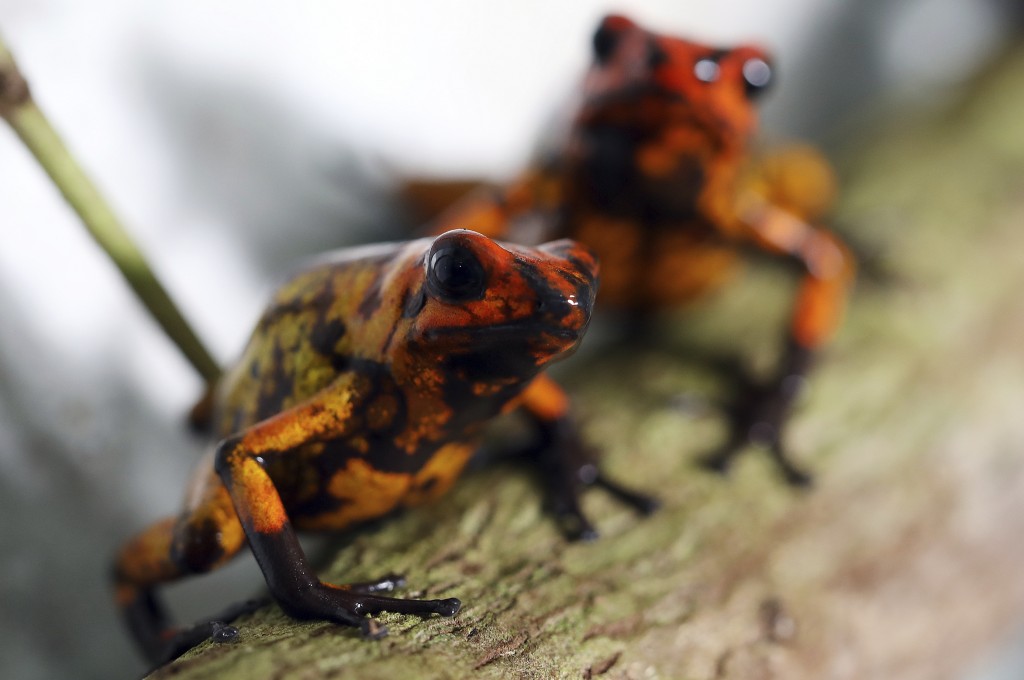 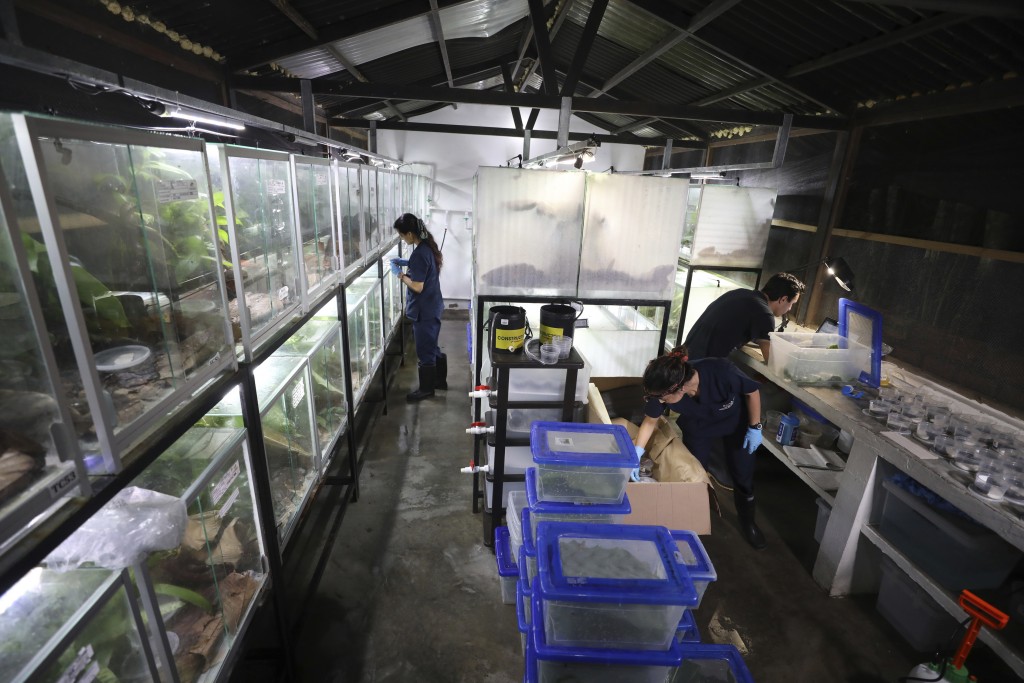 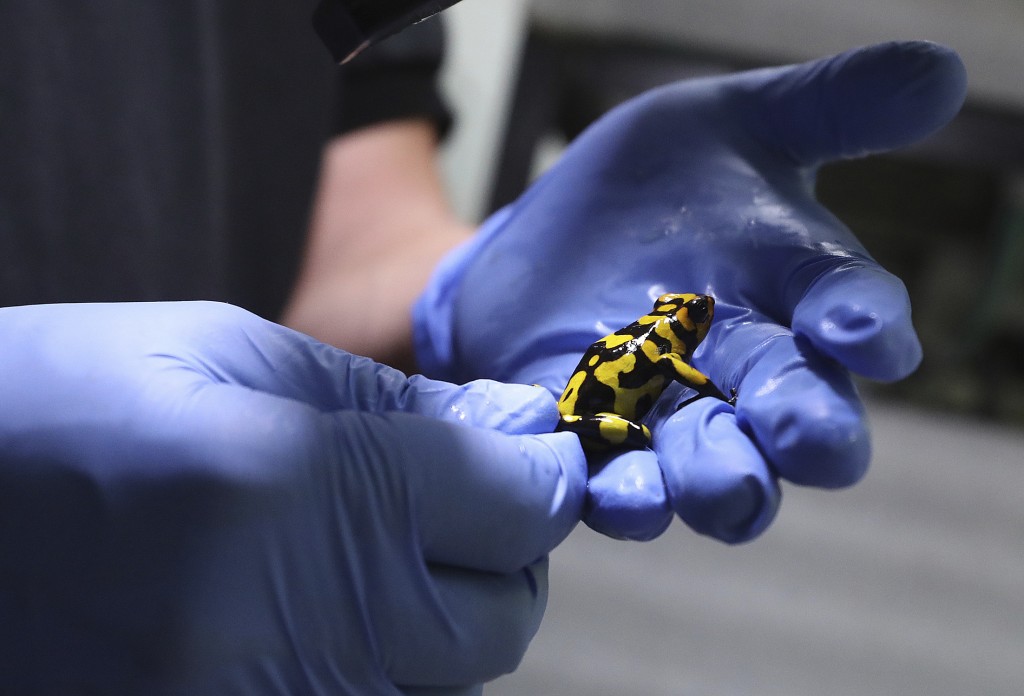 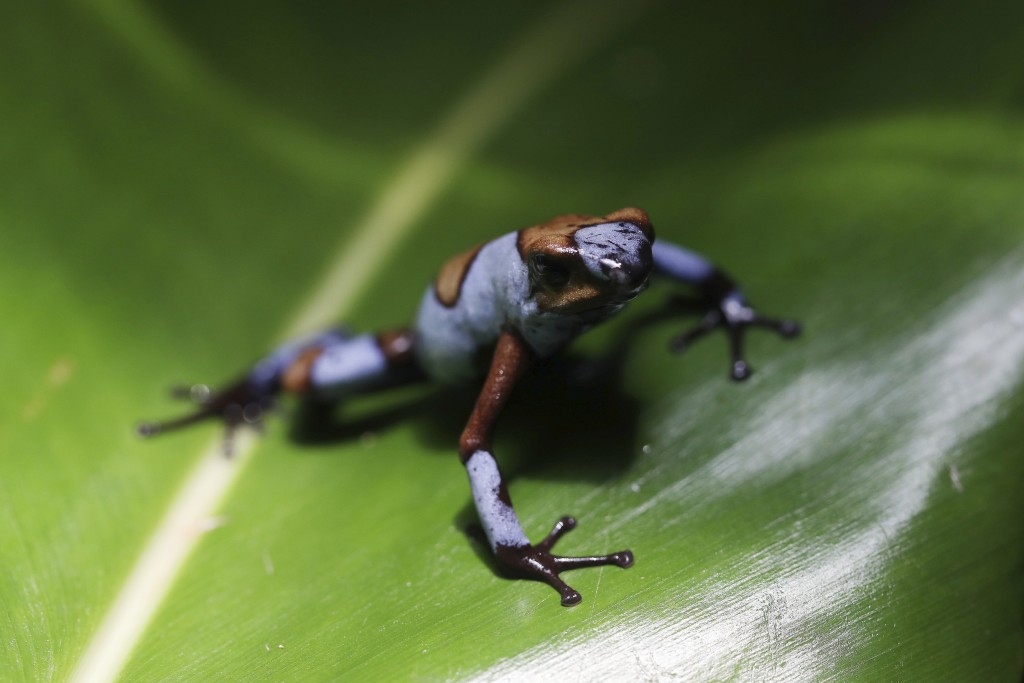 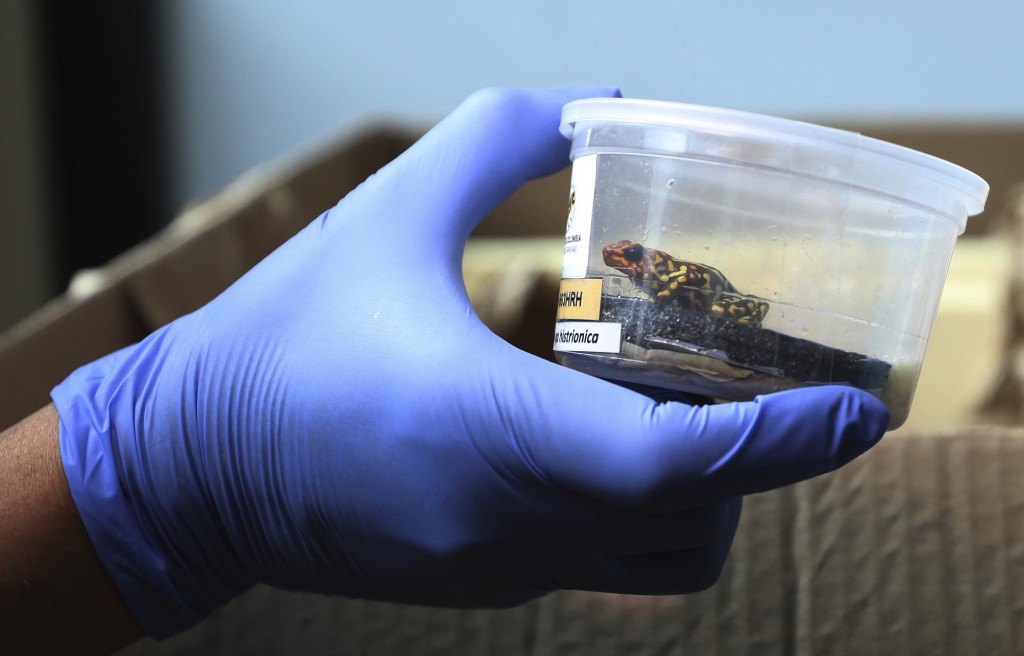 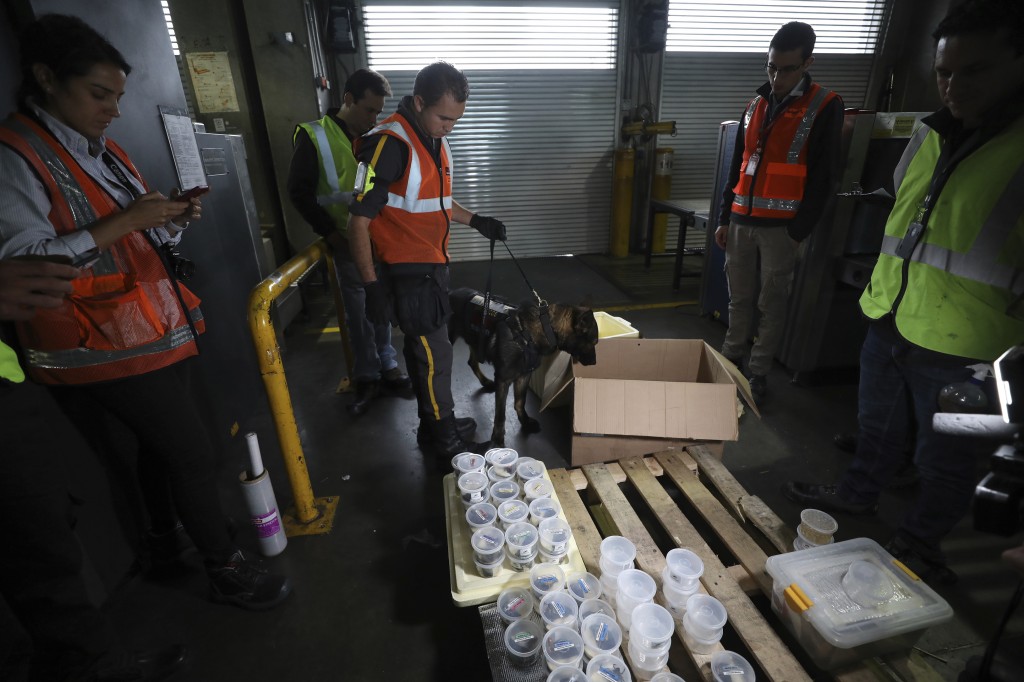 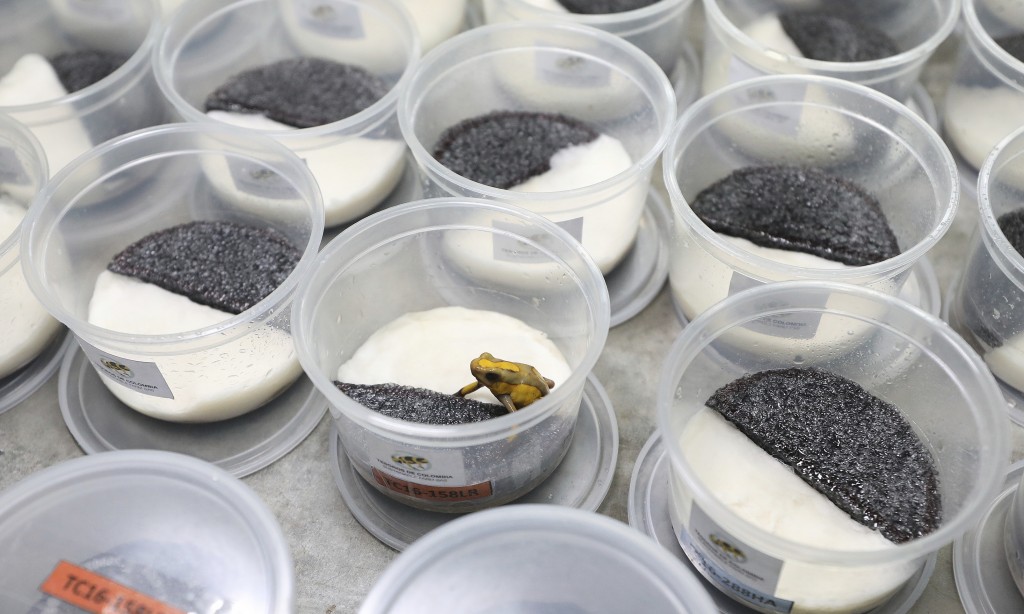 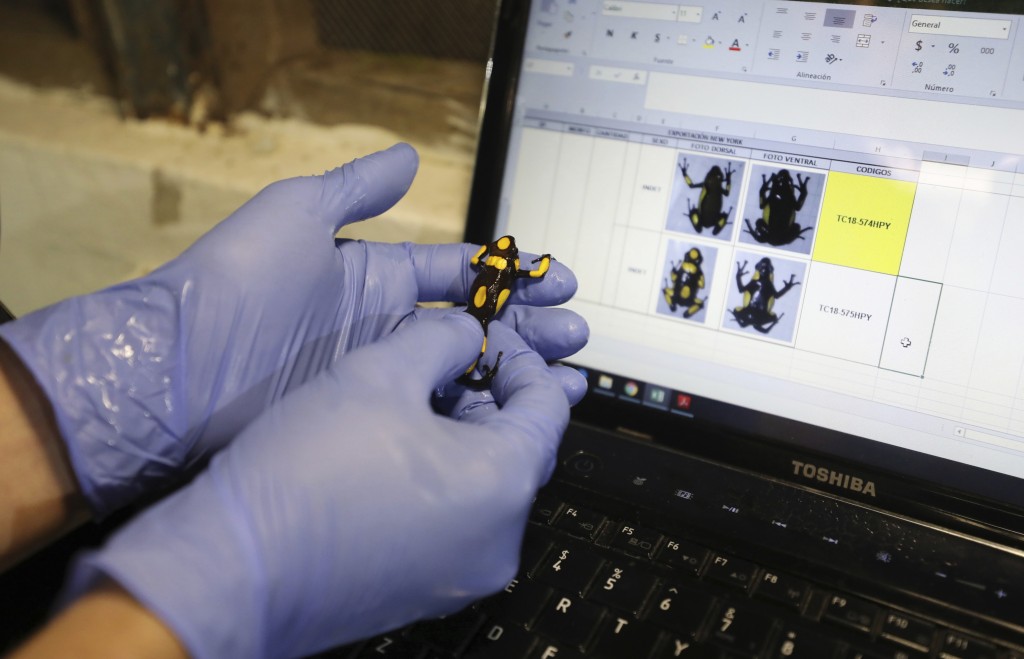 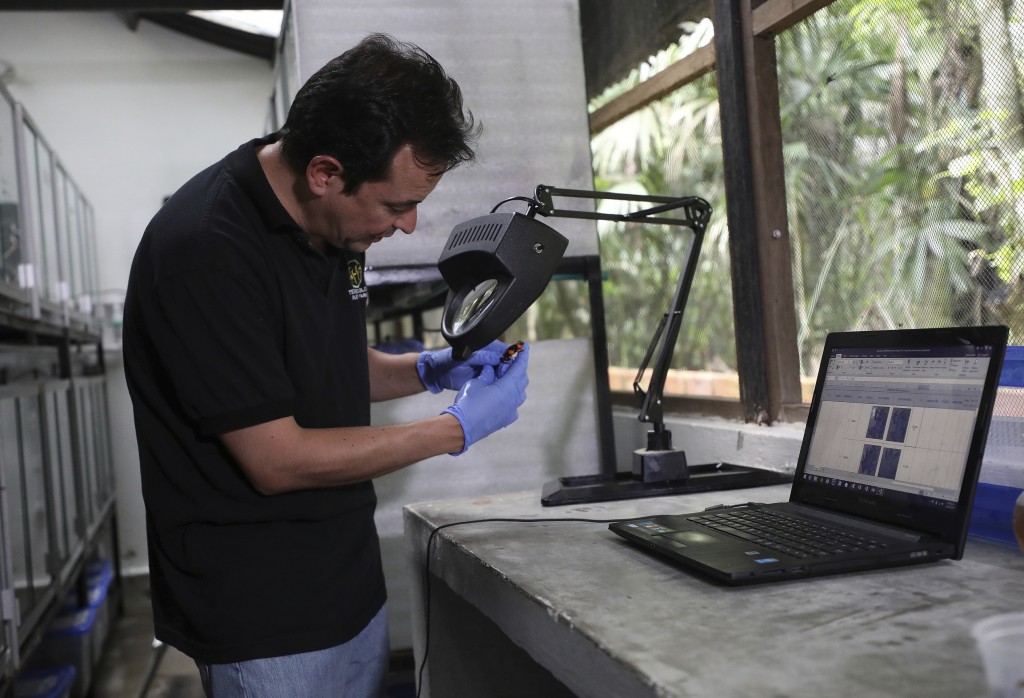 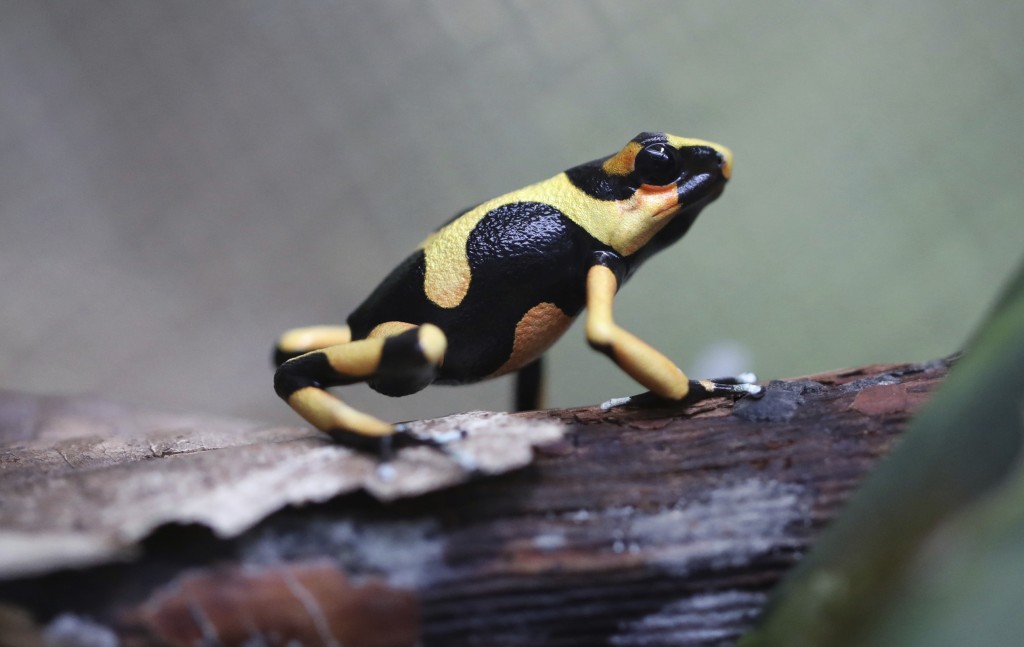 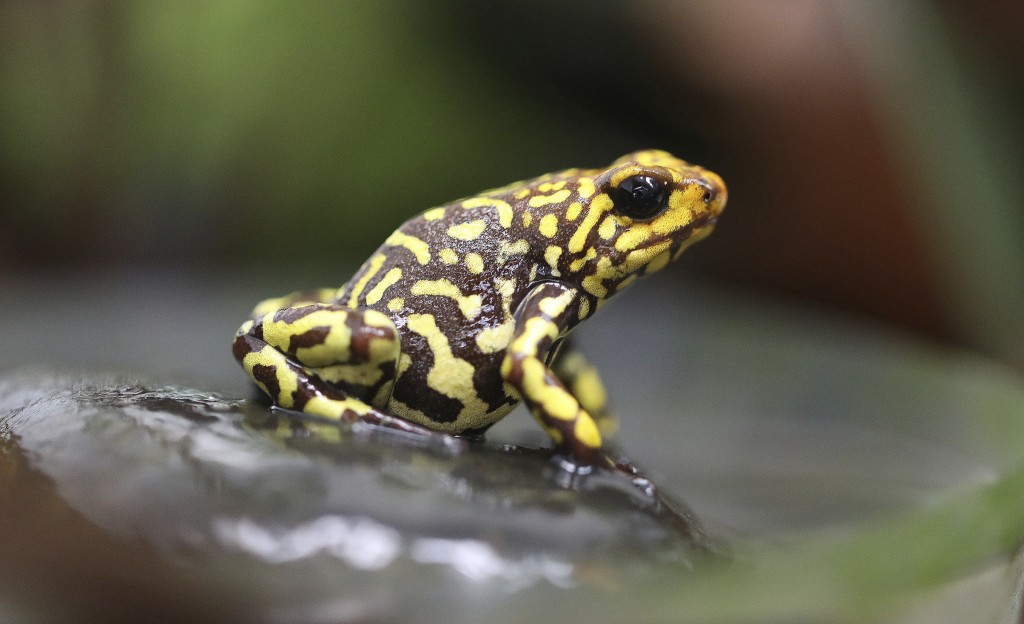 NOCAIMA, Colombia (AP) — In a small farmhouse surrounded by cloud forest, Iván Lozano inspects dozens of glass containers that hold some of the world's most coveted frogs.

The conservationist has been fighting the illegal trade in rare tropical frogs for years, risking his life and his checkbook to save the brightly colored, poisonous amphibians whose population in the wild is dwindling.

But Lozano doesn't hunt down poachers and smugglers. He's trying to undermine them by breeding exotic frogs legally and selling them at lower prices than specimens plucked by traffickers from Colombia's jungles. His frog-breeding center, Treasures of Colombia, is among a handful of conservation programs around the world that are trying to curtail the trafficking of wild animals by providing enthusiasts with a more eco-friendly alternative: specimens bred in captivity.

"We can't control the fact that in some countries it is legal to own these animals," Lozano said. "But we want to make sure that collectors buy animals that are raised in captivity and are legally exported."

Lozano's efforts to replace illegally captured poison dart frogs have made him well known among collectors in the United States, who are increasingly seeking legally traded specimens.

"Before there was no way you could get a histrionica legally," said Julio Rodríguez, an experienced New York City collector, referring to the Harlequin Poison Frog by its scientific name. "If you saw one in a collection, it most likely came from the black market."

Rodríguez said that since Treasures of Colombia began exporting frogs to the United States six years ago prices for some coveted species have dropped significantly. The price tag on the Harlequin Frog dropped by 50 percent, he said. The Golden Dart Frog, another much-sought species, went from around $150 a few years ago to $30.

"We want prices to go down so much that it's no longer profitable for traffickers to sell these frogs," Lozano explained.

He said his company also helps collectors breed their own frogs, so they can flood the market with legally raised specimens, taking pressure off those living in the wild. The frogs raised in captivity by Lozano are no longer poisonous, because they have a different diet than wild specimens. But collectors still seek them for their brilliant color patterns.

"We make ourselves sustainable by moving on to new species," said Lozano, who already has permits to export seven species, including the Red Lehmani, a frog so rare collectors refer to it as "the Holy Grail." Lozano is currently seeking permission from Colombia's government to export another 13 species that are under pressure from animal traffickers.

But while some breeding efforts have helped to tackle the illegal trade, others have had unintended consequences.

Indonesia allows the export of 3 million captive-bred Tokay Geckos to global pet markets each year. But weak regulation has given corrupt companies the opportunity to sell off wild Geckos as Geckos bred in captivity, said Chris Shepherd a conservationist who worked in South East Asia for two decades with TRAFFIC, an environmental group.

Laura Tensen, a zoologist at the University of Johannesburg, said in South Africa, private game reserves that breed lions for hunting have created a new market for lion bones. South Africa now exports lion skeletons to Asia, where they are used for traditional medicine, and this has given poachers in remote regions an additional incentive to go after wild lions.

"For some species captive breeding might help" to reduce trafficking, Tensen said. "But one market does not always replace the other."

In a 2016 study, Tensen concluded that captive breeding programs are more likely to work when animals bred in captivity are just as desirable to customers as those taken from the wild. These programs are also more successful with species that are relatively cheap to breed and in countries where authorities are arresting traffickers.

"In countries where the risks of being caught are low, the prices for wild caught animals are always less than those of captive bred animals," Shepherd said.

Lozano assigns ID numbers to his frogs, to make it harder for traffickers to sell wild frogs as frogs bred in captivity. But he has struggled to keep prices low because of the costs associated with securing export permits from the Colombian government.

It took Lozano three years to secure his first export permit, exasperating two business partners, who eventually gave up on the venture. Lozano continued on his own and acquired a debt of hundreds of thousands of dollars to keep the breeding center afloat.

He has also battled online critics who have tried to undermine his business by spreading rumors on social media that he is illegally exporting frogs. Lozano believes the criticism comes from animal traffickers.

"For our own safety, we try not to disclose details of our location," he said.

Lozano now wants to start a program to repopulate some forests with frogs bred in his lab.

Colombia is home to 734 frog species, more than any other country except Brazil. The Humboldt Institute, an environmental research group, says at least 160 amphibian species in Colombia are critically endangered.

"This is an urgent situation," Lozano said. "If we don't persist some frogs could become extinct."