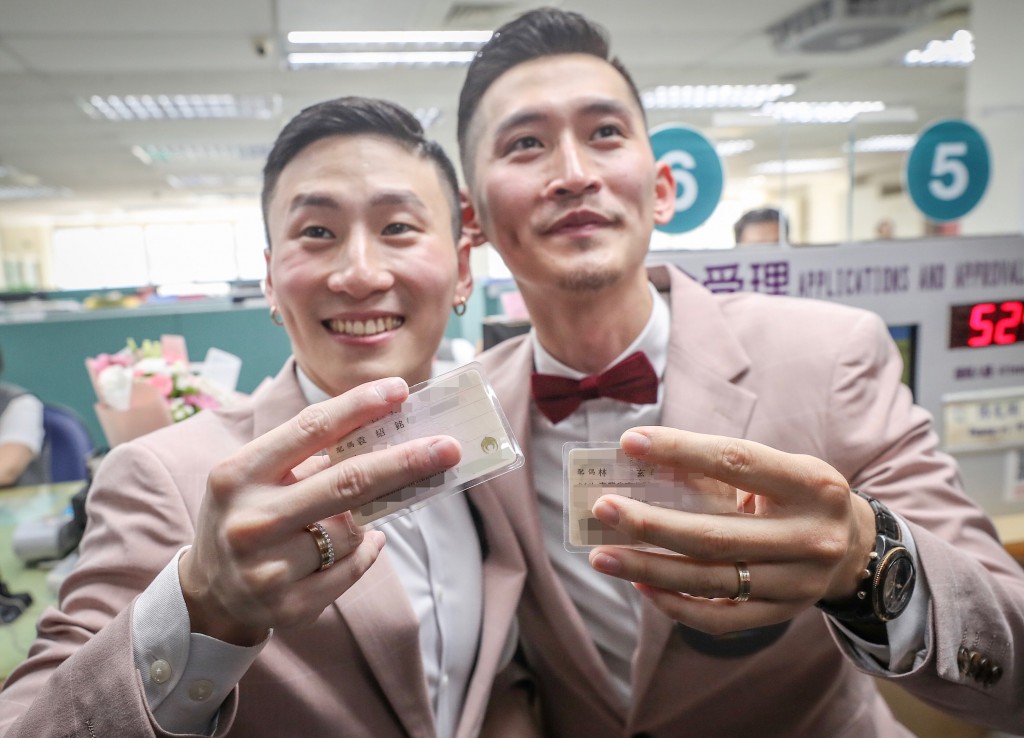 Taiwan’s same-sex marriage law, titled Enforcement Act of Judicial Yuan Interpretation No. 748, was passed by the Legislative Yuan on May 17 and was enacted today. An estimated 289 same-sex couples made reservations to register their marriage with local household registration offices today, including 20 couples in Taipei's Xinyi District.

At about 8:20 a.m. this morning, Shane Lin and Marc Yuan arrived at the Xinyi District household registration dressed in matching pink suits, reported CNA. They kissed before registering, and at 8:38 a.m. became the first gay couple to legally marry in Taiwan and in Asia as a whole, according to the report. Two women, identified as playwright Chien Li-ying (簡莉穎) and cartoonist Yan Shih-chi (厭世姬), a.k.a. "Cynical Chick," who previously had been married through a Buddhist ceremony, became the second same-sex couple to register today at the Xinyi office. The couple told CNA that they had actually already married seven years ago and today was a formality to make their marriage legal.

The couple said that the registration would finally provide them legal protection and said, "The day we waited for has finally come to allow us to take care of each other." The couple added that "This is our second marriage, now we not only have certification from God, but also society and familial recognition. Thank you for your willingness to marry me."

Soon, many other couples followed suit in other districts of Taipei, and other cities across Taiwan, including Tainan and Kaohsiung. Video of first same-sex couples to legally register in Taipei: