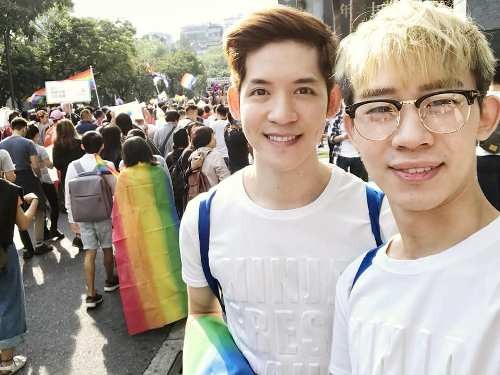 The historic passage of a same-sex marriage bill in Taiwan last Friday was a moment of euphoria for the tens of thousands of marriage equality supporters gathered outside the Legislature, but for Guzifer Leong (梁展輝) of Macau it did not mean he could finally marry his Taiwanese partner.

As the crowds of gay marriage advocates cheered and burst into tears of joy, Leong stayed quiet. Although he was happy to see the bill passed after decades of agonizing efforts by the country's gay rights movements, he was deeply disappointed that it excluded foreign nationals like him from countries and areas that do not allow same-sex marriage.

On May 17, during the readings of the gay marriage bill, lawmakers voted 84-6 against a motion to make it possible for a Taiwanese to marry a partner from a country that does not recognize same-sex marriage.

"The crowd's cheers were deafening and many people were crying and hugging each other," said Leong, who was outside the Legislature with his Taiwanese partner Ting Tse-yan (丁則言) when the bill was passed.

"But when I looked at the other transnational couples around me, I suddenly felt as if we were in two different worlds," Leong said. "I realized we'd been left out of the joy most of the other people were feeling."

The issue stems from Article 46 of the Act Governing the Choice of Law in Civil Matters Involving Foreign Elements, which states that "the formation of a marriage is governed by the national law of each party."

What the article means is that a transnational marriage cannot be registered in Taiwan unless it is recognized in the home countries of both partners.

For same-sex couples with at least one partner from a country that does not permit gay marriage, the new same-sex marriage law has left them out in the cold because of the Legislature's rejection of the New Power Party's (NPP) proposed amendment to exempt gay couples from the Article 46 of the civil law on foreign partners.

Although Macau is one of the areas where gay marriage is not legal, Leong and Ting are hoping to join the many same-sex couples in Taiwan who are planning to register their marriages on May 24 when the newly passed bill will take effect, giving Taiwan a place in history as the first Asian country to legalize gay marriage.

The couple is pinning their hopes on the precedent set in an administrative interpretation issued by the Ministry of the Interior (MOI) in October 2016, which exempts Taiwanese and Cambodian couples from the marriage law of Cambodia under certain conditions.

The MOI interpretation applies specifically to nationals of Cambodia, which has a ban on marriages between its citizens and those of several countries, including Taiwan, as part of an effort to prevent human trafficking.

Ting and Leong are hoping that interpretation can be used as precedent to argue their case, particularly as they meet one of the conditions for exemption, which is that the two partners must have been living together and/or have a child.

"That interpretation can be applied to transnational gay marriages, in cases where one partner is from a country that does not recognize same-sex marriage," Leong said.

In their own case, Leong said, he and his partner have been living together since 2017, two years after they met in Taiwan.

Leong, who studied clinical psychology at Fu Jen Catholic University in New Taipei City from 2008 to 2013, was on a visit to Taiwan when he met Ting.

After Leong returned to Macau, he and Ting spent the first two years of their relationship flying back and forth between their two cities, which they said was tough, emotionally and financially.

"In those first two years, we barely spent any time together," Ting said. "I wanted to move to Macau and find a job there, but because the economy was not good at the time, most of the applications I sent out went unanswered."

While their circumstances were similar in many ways to those of any other couple in a long-distance relationship, the difference was that they did not have the option of solving the problem by getting married since gay marriage was not legal in either location.

By April 2017, Leong had qualified for an HF169 residence permit, which may be granted to residents of Macau and Hong Kong who have studied at the tertiary level in Taiwan and returned home for at least two years after graduation.

With his HF169 residence permit in hand, Leong flew back to Taiwan and used his savings to set up a dessert shop in Kaohsiung, where he took up the role of pastry chef, while Ting concentrated on the marketing aspect of the business.

They have been able to keep the shop going and have been living together in an apartment that is a 10-minute walk from Ting's family home in Kaohsiung.

When Taiwan's Constitutional Court ruled in May 2017 that it was unconstitutional to deny same-sex couples the right to get married, Leong and Ting were ready to take their relationship to the next level.

Four months after the ruling was issued, the couple arranged their pre-wedding photo shoot, although Interpretation No. 748, as the ruling was called, gave lawmakers a two-year deadline to enact same-sex legislation.

As part of the couple's preparations to get married, Ting came out to his parents in November 2018, after five national referendums on LGBT issues were held.

"My parents had always suspected that I was gay, but they hated to admit it," Ting said.

There had been a tacit "don't ask, don't tell" rule with his parents concerning his relationship with Leong, which was why it took them a while to accept that their son was "officially gay," Ting said.

With that matter out of the way, Ting and Leong thought they only had to wait for gay marriage legislation to be passed in Taiwan before they could finally tie the knot, but the release of the Cabinet's draft same-sex marriage bill in February raised fresh concerns as it did not address the issue of transnational couples.

"I combed through all the relevant legal articles after the bill was released, but realized we still would not be able to get married," Leong said.

Even as Leong and Ting are planning to go forward on the precedent of the MOI's 2016 interpretation, they are hoping lawmakers will work to remedy the omissions in the same-sex marriage bill that was passed on May 17, titled the Enforcement Act of Judicial Yuan Interpretation No. 748.

Apart from omitting the transnational gay marriage issue, the bill did not allow the adoption of one partner's non-biological children by the other partner, Leong noted.

"We knew our real battle would not start until after the third (and final) reading of the bill, because before that, everyone's focus would've been on making marriage equality a reality," he said.

Ting, meanwhile, is arguing that with the passage of the same-sex marriage bill, all Taiwanese, whether heterosexual or homosexual, now have freedom of marriage, and that should include Taiwanese in a transnational same-sex relationship.

"I only hope they (the lawmakers) will not forget about us," he said.