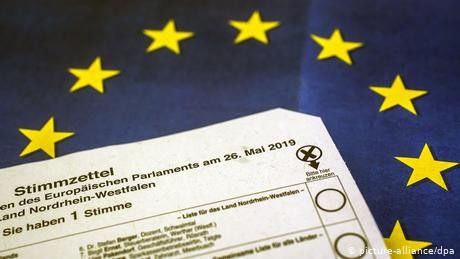 European Parliament President Antonio Tajani thanked a series of international footballers this week for their efforts to drum up voter awareness for the European elections.

"I am very happy about the participation of so many European professional footballers in this campaign. It's proof of the unity and pride felt by Europeans for their continent, and it sends a strong message on the protection of the future of Europe."

The #ThisTimeImVoting (or #DiesmalWaehleIch in German) campaign got a small selection of footballers on board, hoping to profit from their impressive reach online. Voter turnout has been a perennial problem for the European elections, with authorities hoping to buck a decades-long trend of declining participation in 2019.

The campaign was able to attract a series of international players, but household names were notable in their absence. Ten European players' associations supported the project, but not Germany's VDV or the English Premier League's influential PFA. The Brexit-laden UK wasn't expecting to participate in these European elections at all until the last minute.

Voting begins across Europe on Thursday, and critics might argue that the efforts of players' union FIFPro and a handful of internationals were too little, too late — given that the project nominally started in December.

One professional to act early and with determination was Finland captain Tim Parv. He posted his first video on the issue back in April, giving voters plenty of time to ensure they were registered properly, and pinned it to the top of his social media profiles.

Frankfurt goalie Kevin Trapp posted a promotional video, subtitled in English and German, to his Instagram page on Tuesday.

'We need to take care of each other'

Swedish women's team captain and departing Wolfsburg legend Nilla Fischer was another face of the campaign, which laid particular importance on securing both male and female footballing support. Fischer shared material from the FIFPro players union to showcase her involvement.

"It's very important that we, all the different players, take a stand and get people to vote, because it does matter in times like this," Fischer said in a video first published in April. "I think with the direction the world is going now that it is a very important subject. We need to take care of each other and everyone should have equal rights."

According to information from the European Parliament, their get out the vote campaign had been at least a moderate success. It said on Wednesday that 300,000 people had registered either to receive information on the campaign, or to actively participate in it, 34,000 of them in Germany.

Voting runs from May 23 to May 26 across Europe; Germany votes on Sunday. Results will follow on Monday.