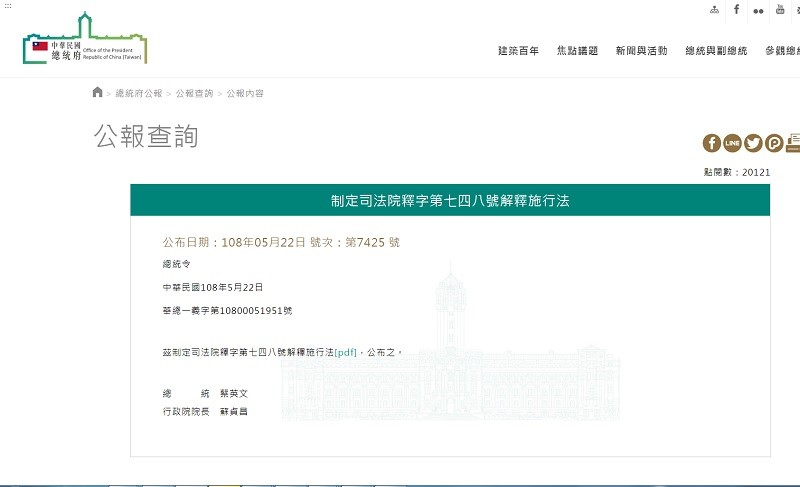 TAIPEI (Taiwan News) – Taiwan’s same-sex marriage law, titled Enforcement Act of Judicial Yuan Interpretation No. 748, will be enacted on Friday (May 24), after being passed in the legislature last week, making Taiwan the first country in Asia to have a same-sex marriage law.

The newly passed Enforcement Act of Judicial Yuan Interpretation No. 748 appeared in a Presidential Office communiqué, which means the president of the country has signed it into law and promulgated it, as well as in the Legislative Yuan’s “latest promulgated laws.”

A message from President Tsai Ing-wen (蔡英文) promulgating the law, posted by an internet user, was shared more than 100 times in a short time, according to a Liberty Times report on Wednesday (May 22).

The Presidential Office’s promulgation of the law in its communiqué had received more than 20,000 hits as of 9:11 p.m. on Wednesday, more than 100 times the average number of hits other enactments have received.

On Friday, Taiwan will begin to register the marriages of same-sex couples, including those between Taiwan nationals and partners from one of 26 countries where gay marriage is legal.