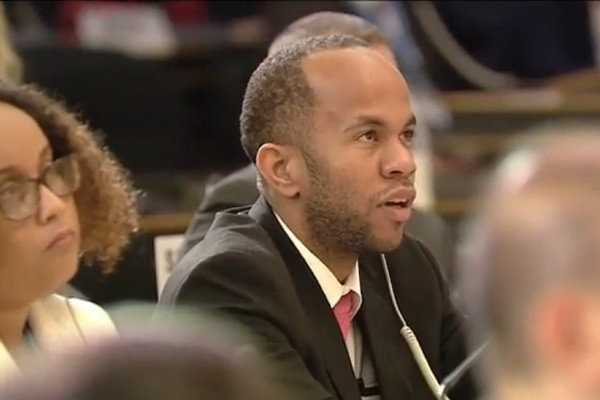 TAIPEI (Taiwan News) -- At the opening session of the World Health Assembly on Monday (May 20), St. Vincent and the Grenadines Minister of Health Luke Browne delivered a powerful speech outlining the common sense reasons why Taiwan should logically be included in the World Health Organization's (WHO) annual forum.

During the presentation of a supplementary item calling for Taiwan to be included in the WHA titled "Inviting Taiwan to Participate in the World Health Assembly," Browne presented a thorough and compelling argument as to why Taiwan should be logically and ethically included in the gathering. During his stirring speech, Browne emphasized the fact that Taiwan is a separate nation, its participation in the past, the needs of its 23 million people, and that its participation would not be inconsistent with the "one China" principle.

First, Browne pointed out the fact that because China does not actually "exercise authority and control over Taiwan," it cannot possibly represent the country at the assembly. He then reminded participants that "Taiwan was never defined to be a part of the PRC" and that the two countries have "separate, autonomous, independent, and very different governments."

Browne cited Taiwan's previous attendance of the WHA as proof that its participation is not illegal, as China had claimed. He later stated that the fact that Beijing had allowed Taiwan to participate in the past was an "open acknowledgment by the PRC itself" that it could not "adequately represent" Taiwan at the assembly.

He then cut to the chase and stated the obvious reason why Taiwan has been excluded is that "the government in Beijing does not like the current administration in Taipei." He then questioned if it is ethical to exclude the "interests of the 23 million people in Taiwan" because of the interests of another government.

Browne then exposed the flaw in China's argument that Taiwan should be excluded because it is a part of China by pointing out the fact that Taiwan had already participated in the past. He pointed out the absurdity of China's logic by asking, "Can a part of my country, St. Vincent and the Grenadines, be invited to sit here as an observer?"

He closed by calling for reason and said that in the same spirit of there being "one Caribbean" with many nations, so too is there "one China" with separate nations that should be allowed to participate. He also called for wisdom and reason to prevail in allowing the health interests of "23 million people of the world" to be represented.

We truly appreciate #StVincentAndTheGrenadines Health Minister Luke Browne’s staunch support of #Taiwan. The representation of the 23 million people of Taiwan in @WHO should not be subject to a single country’s one-sided interpretations. #TaiwanCanHelp pic.twitter.com/IkXG8C3dE3

The following is the complete transcript of Browne's speech:

"Mr. President, we are once again debating a proposed supplementary agenda item entitled 'Inviting Taiwan to Participate in the World Health Assembly as an Observer.' I look forward to the day when the objective being pursued is achieved, the just aspirations of the Taiwanese people realized, and purely health considerations take precedence at this supposedly 'World Health Assembly.'

There's simply no principled basis why Taiwan should not be here. The argument in favor of allowing Taiwan to participate in this assembly as an observer are straightforward and clearcut.

We all know that the PRC government does not exercise authority and control over Taiwan and cannot be reasonably said to represent it here. Taiwan was never defined to be a part of the PRC, nor can it properly considered so to be, since the two places have separate, autonomous, independent, and very different governments.

The participation of Taiwan at this assembly as an observer is neither illegal, as suggested by the delegate from the People's Republic of China, nor inconsistent with any resolution. As we could see from the fact that Taiwan used to be here as an observer in previous times.

The only reason why it is not here now is because of the fact that the government in Beijing does not like the current administration in Taipei. Is this right?

Should the legitimate health interests of the 23 million people in Taiwan be held ransom to the preferences of a government? Interestingly, the fact that Taiwan was previously allowed to be here as an observer is an open acknowledgment by the PRC itself that it could not adequately represent the interests of Taiwan at this forum.

If Taiwan were really and truly a part of the PRC, should it ever have been allowed to come to this assembly as an observer? Can a part of my country, St. Vincent and the Grenadines, be invited to sit here as an observer?

St. Vincent and the Grenadines is of the view that the proposed invitation of Taiwan to participate in the World Health Assembly, at least as an observer, is not even incompatible with the oft-cited 'one China' principle. Just like the participation of several nations from the Caribbean in this forum is consistent with our cherished and valued notion of one Caribbean.

One China, just like one Caribbean, can and should only be construed as a reference to a common history, culture, and heritage. Mr. President, I ask that I incline thine ear onto wisdom and reason, apply thine heart onto understanding, and allow the supplementary item entitled 'Inviting Taiwan to Participate in the World Health Assembly as an Observer' to be placed on the agenda in the interest of the health and welfare of the 23 million people of the world located in Taiwan and universal health coverage.

Browne's speech in full can be seen below: