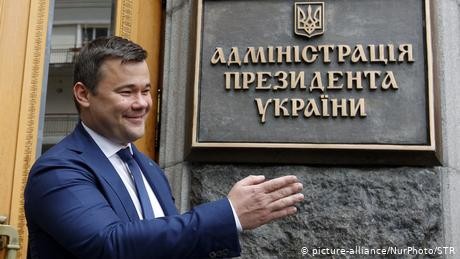 Both Zelenskiy and Bogdan, a lawyer, have close ties to Ihor Kolomoisky, one of Ukraine's richest men. Kolomoisky has been in a long legal battle with Ukrainian authorities over control of PrivatBank, the country's largest lender.

Bogdan, who was an advisor to Kolomoisky during the tycoon's tenure as a regional governor in 2014, also represented him in the PrivatBank case.

Kolomoisky, who owned PrivatBank until 2016, claims its nationalization that same year was illegal. Although a Kyiv court ruled in the tycoon's favor in April, the country's central bank has appealed the ruling.

The central bank claims that to reverse the process would put a $3.9 billion (€3.5 billion) loan program from the International Monetary Fund (IMF) at risk as well as negatively impacting investor confidence.

Zelenskiy, a 41-year-old former comedian with no political experience, has brushed off claims that he would favor Kolomoisky or offer him compensation in the PrivatBank case. The two men have longstanding business ties.

The promise of fighting corruption

Zelenskiy was swept to power in late April in a run-off election against incumbent Petro Poroshenko on the promise to end business as usual in Kyiv and fight corruption.

Poroshenko came to office in 2014 offering the same, yet voters and outside observers say he was slow to act on those promises.

For Andriy Bogdan, the new post will not be his first in government. He previously served as deputy minister of justice and deputy minister in charge of anti-corruption policy under Viktor Yanukovich before the former president fled to Moscow during the Maidan uprising in 2014.

No faith in parliament

The announcement of Bogdan's appointment came shortly after Zelenskiy made good on a promise given during his inauguration speech on Monday, namely to disband the Verkhovna Rada, Ukraine's parliament, and stage snap elections.

On Tuesday, Zelenskiy issued a presidential decree announcing as much. He said, "The main argument for dissolving the Verkhovna Rada is an extremely low trust in the institution by Ukrainian citizens."

New elections are scheduled to take place on July 21.