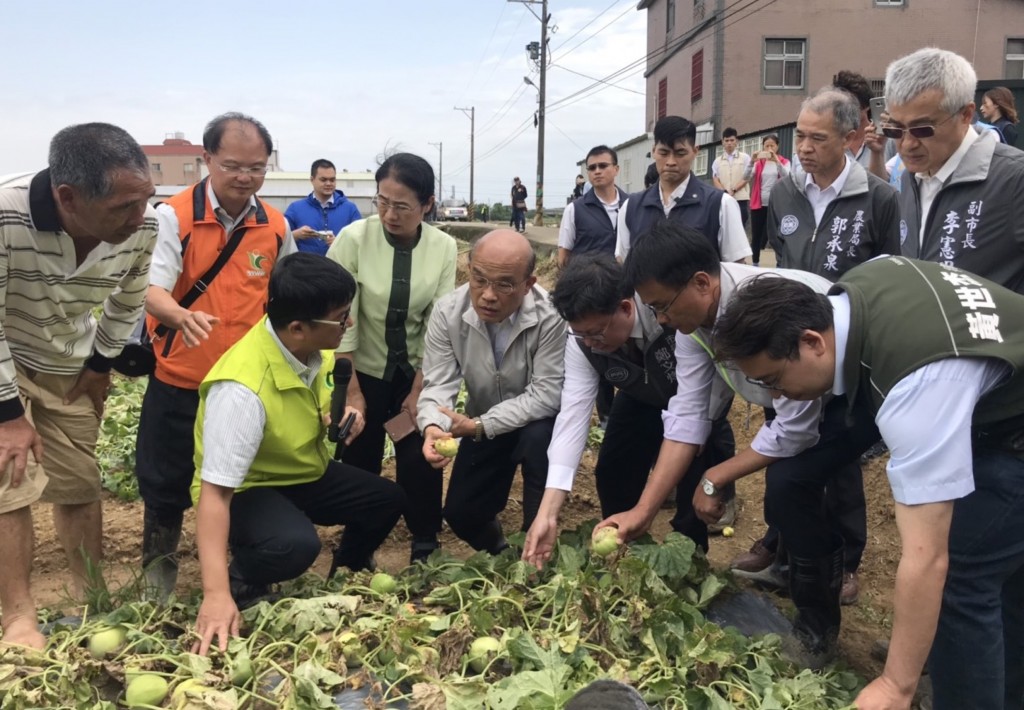 Gou said during an interview on Tuesday morning that President Tsai Ing-wen’s pension reforms had been vague and nondescript. The president on Sunday had told citizens they would soon begin reaping the benefits of her administration’s various policies delivered over the past three years.

Su spent Tuesday morning in Taoyuan’s Xinwu District visiting vegetable farms devastated by torrential rain over the previous few days, according to the Central News Agency. He said the government hopes to help farmers recover losses in the quickest and best way possible, so that they can continue regular harvest operations.

During an on-site interview, Su pleaded for the public to continue buying Taiwanese gourds in order to bolster the income of farmers who took a hit due to the recent weather.

The premier also addressed media questions about apparent tit-for-tat between Gou and him.

Su said he never condemned Gou and believes the Kuomintang (KMT) presidential candidate is very action-oriented. He said Gou is known as the “Genghis Kahn of the business world” and encouraged him to invest more in Taiwan.

Gou has more money than anyone, said Su, and Taiwan needs a great amount of investment.

Su said he had breakfast Tuesday morning with enterprise leaders, and helped them understand that the government is willing and able to help industries. More than 50 home-grown companies have returned to invest in Taiwan, he said, and this year’s NT$250 billion returnee investment target has already been exceeded.

Overseas giants including Google, Microsoft and Facebook have also greatly invested in Taiwan, he said.

Given that this is Gou’s first election, he could be considered a novice, said Su, but “insult tactics” are not the best. Actively investing in Taiwan will likely win more people’s approval, he added.

“If anyone has any good suggestions, put them forward,” Su said, “it is better for Taiwan than using insults.”