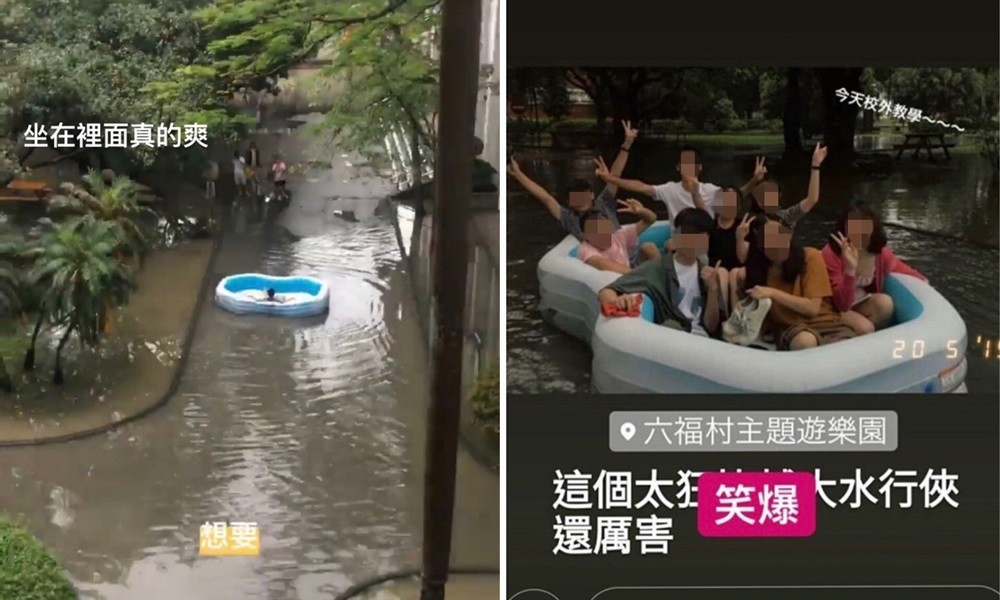 TAIPEI (Taiwan News) -- After much of Taiwan was hammered by a rain bomb yesterday, photos have surfaced of students at Fu Jen Catholic University in New Taipei City making the most of the flooding and turning the campus into a free '"water park."

As the campus of Fu Jen University was inundated by flood waters from a massive rain bomb that blasted northern Taiwan, photos began to surface on Taiwan’s PTT Bulletin Board System of students frolicking in what many mockingly referred to as the "Leofoo Village Theme Park." The water was soon so deep that roads on the campus became "rivers" on which large groups of students could be seen riding huge inflatable rafts.

In one of the photos, eight students can be seen piled into one raft with the caption "Leofoo Village Theme Park," giving some readers the impression that the photo was actually taken at the amusement park in Hsinchu County's Guanxi Township. On its Facebook page, the amusement park's monkey mascot even made fun of the photo and encouraged readers to enjoy the real thing in Hsinchu. A flood of comments by netizens soon poured in:

"This is so much fun. With that kind of water depth, rain boots are probably enough."

"Eight people are able to float? How deep are the flood waters?" Photos of the flooded campus posted by FJ News: