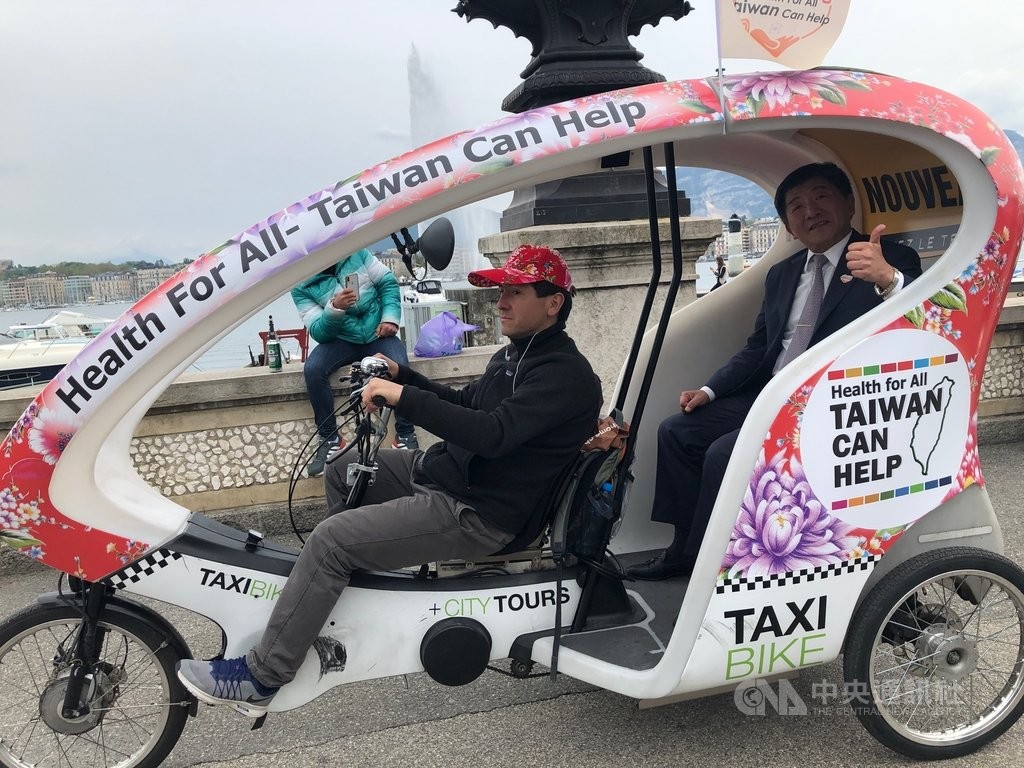 A Taiwanese delegation comprised of civic group members plan to take part in a walking event organized by the World Health Organization (WHO) Sunday to highlight Taiwan's contributions to world health ahead of the May 20-28 World Health Assembly (WHA), even though Taiwan has been barred from attending this event.

Members of the Taiwan United Nations Alliance (TAIUNA) will try to make Taiwan's presence felt by attending the Walk the Talk, a warm-up for the annual WHA meeting, which is expected to attract up to 1,000 participants from various countries.

During the event, TAIUNA members are expected to wear T-shirts bearing the words "Taiwan Can Help," to underscore Taiwan's contributions to international efforts to achieve universal health coverage, according to a member of the delegation, who spoke on condition of anonymity.

Last year, when Taiwanese civic groups and expatriates attended a similar event, they were forced by Swiss police to take off the T-shirts printed with the world "Taiwan," while their banners bearing the word "Taiwan" were also confiscated and many were brought to a police station and given a fine of several hundred euros.

For this year's event, after officials from Taiwan's representative office in Geneva explained to WHO representatives that Taiwanese have no intention of hindering the process of the upcoming walk and just want to express their appeal in a quiet and friendly manner, Swiss police eventually agreed with Taiwanese participants' wearing the T-shirts bearing the appeal "Taiwan Can Help," according to the TAITUNA member.

On Saturday, wearing T-shirts with the words "Health for all with Taiwan," TAIUNA members and several Taiwanese expatriates distributed campaign pamphlets and leaflets in four languages and displayed five taxi bikes bearing the slogans "Health for All," and "Taiwan Can Help," by Lake Geneva outside the WHA venue.

One taxi bike driver, identified only as Javier, said he knew the slogans are to help promote Taiwan's bid to participate in the WHA.

He said Taiwan can contribute to areas with scant medical supplies and that its participation in the WHA is in line with the principle of universal right to health.

Meanwhile, Michael Tsai (蔡明憲), head of TAIUNA, expressed gratitude to Taiwan's government for its support for a flash mob launched by the group outside the Permanent Representative of China to the United Nations Office in Geneva in protest against Beijing's obstruction of Taiwan's participation in the WHA and with the aim of reaffirming Taiwan's stance.

Taiwan had hoped to attend the May 20-28 WHA in Geneva as an observer, as it did from 2009 to 2016, but failed to obtain an invitation for the third consecutive year due to obstruction by China.

China has been taking a harder line on Taiwan's participation in international organizations since President Tsai Ing-wen (蔡英文) of the pro-independence Democratic Progressive Party (DPP) took office as Taiwan's president in May 2016.