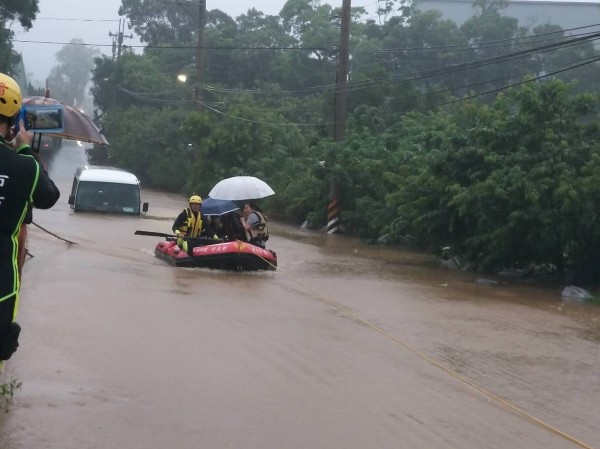 Flooding occurred in an underpass below Zhongyang North Road and Ligong Street in Taipei's Beitou District, causing a taxi to become trapped inside. The driver was able to successfully escape from his vehicle and police have since cordoned off the underpass on both sides. Heavy rains and lightning strikes have caused power lines to fall on Zhongshan Road in Taichung City's Dajia District. A person who is suspected to have come in contact with one of the downed power lines was found to have collapsed and lost all vital signs, according to the report.

Fortunately, after the person was rushed to a hospital for treatment, their heart rate and blood pressure was restored. The cause of the accident is being investigated by police. Meanwhile, in Tamsui, both Alethia University and St. John's University have announced the cancellation of classes for the rest of the day.

The Taoyuan Police Department reports water 10 cm deep has pooled around the Taoyuan Airport MRT A8 station at the corner of Wenhua 1st Road and Fuxing 1st Road. However, because the station itself is elevated, it has not been directly affected by the flooding.

Meanwhile, flood waters 20 cm in depth have been reported on Xingye Street in Taoyuan's Guishan District, prompting police to close the street off until it can be properly drained. The Taoyuan City Government has issued a level 1 flood warning for Luzhou and Guishan districts. Motorists are advised to exercise extreme caution when driving through these districts. Video of flooding in Taichung:

Video of flooding in Taipei: