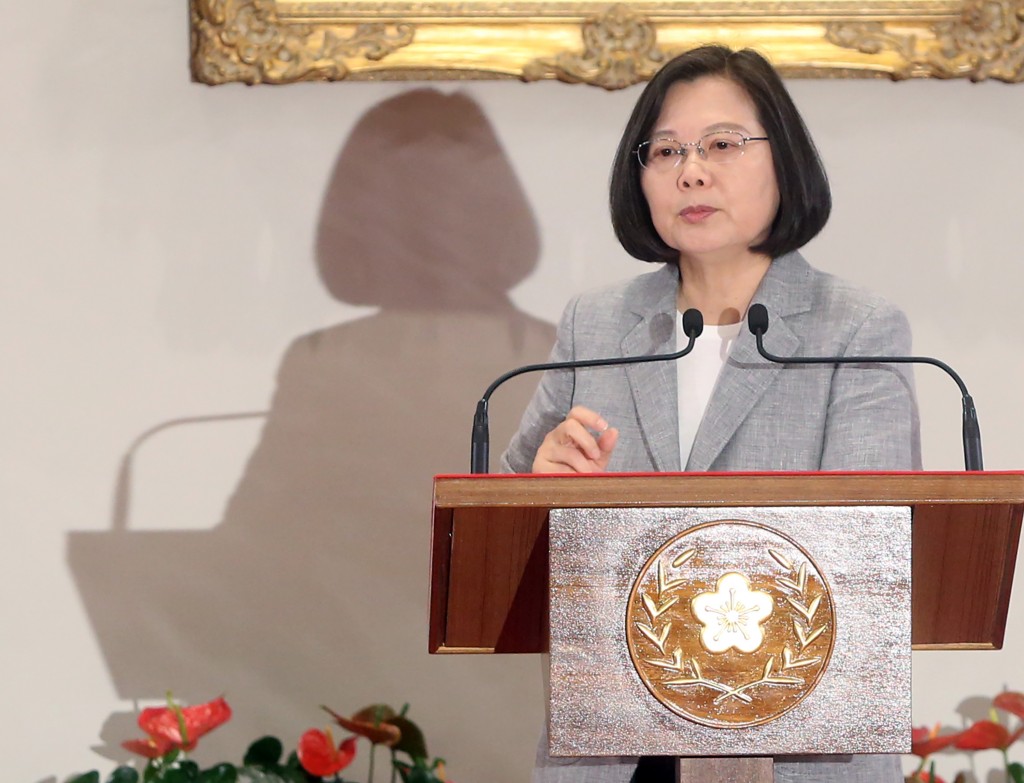 TAIPEI (Taiwan News) — Looking back at her first three years as President, Tsai Ing-wen (蔡英文), who is seeking re-election, laid out all the reforms and policies her administration has carried out since 2016, which provide her with a blueprint for what she hopes to be able to do in the next term.

Many of the reforms Tsai mentioned at a press conference on Monday (May 20) have been contentious policies of her presidency, including pension reforms targeting military personnel, public servants, and teachers, and an energy policy that intends to replace nuclear power with alternative energy.

Tsai acknowledged that she has endured “loneliness” and “criticisms” over the past three years as she tried to push for those reforms, but emphasized that those reforms should have been initiated by previous governments.

While domestic reforms were being pursued, Taiwan’s foreign affairs have also experienced considerable changes. Since Tsai took office, cross-strait relations have suffered a great slump, as Beijing, which considers Tsai and her Democratic Progressive Party (DPP) independence-leaning, continues to poach Taiwan’s diplomatic allies and threaten the island nation with incursions of military aircraft.

“The government is committed to maintaining peace and security across the Taiwan Strait,” said Tsai, signaling that she will not seek changes in cross-strait policy.

Nevertheless, the president has taken a harder line with Beijing in recent months, pledging to maintain autonomy while clearly rejecting the “one country, two systems” formula for Taiwan, as proposed by China’s leader Xi Jinping in January.

The administration’s policy is “not provocative,” said Tsai, seemingly referring to the criticism of Taipei Mayor Ko Wen-che (柯文哲), who attributed the deterioration of cross-strait relations to Tsai’s provocations. “What kind of a sovereign and independent country is it if the leader of that nation cannot clearly express the opinion of the public?” added Tsai.

Even though the trade relationship with China remains vital for Taiwan, the Tsai administration has actively tried to reduce the country’s economic dependence on China. This is in contrast to the economic policy of her predecessor, Ma Ying-jeou (馬英九) of the Kuomintang (KMT), who pursued deeper economic integration across the strait during his two terms.

Over the past three years, the Tsai administration has sought to increase trade and business opportunities with Southeast Asian nations, and has continued to improve the country’s partnerships with Japan, Australia, and even Europe.

In the meantime, Taiwan’s relationship with the United States has made major strides forward and is widely considered to be the best bilateral relationship the two countries have shared in decades.

The U.S. Congress passed the Taiwan Travel Act in 2018, which encourages mutual visits of high-level officials from the U.S. and Taiwan government. Earlier this month, the Taiwan Assurance Act, which reaffirms the Taiwan Relations Act and the normalization of U.S. arms sales to Taiwan, also passed the House of Representatives.

As trade tensions between Washington and Beijing continue to escalate, Tsai reminded the public that Taiwan would have suffered a serious economic setback if her administration had not addressed the China-centered economic policy upheld by the KMT from 2008 to 2016.

“If we continued the KMT’s policy and locked our economic lifeline to China, how could Taiwan survive under the current U.S.-China trade war?” Tsai asked.

“Taiwan’s economy continues to show stable growth and opportunities have been increasing,” said Tsai. She anticipated that the country’s GDP growth rate would remain at roughly two percent in 2019 as the government’s plans to attract foreign investments have been successful.

Investments promised by returning Taiwanese firms into the local economy have reached NT$288 billion (US$9.1 billion) so far, and multinational companies such as Google and Facebook have also decided to expand investments in Taiwan.

After three years of preparation by the government, major policies and reforms will start yielding fruit in this term’s final year, said Tsai. “The government does not seek quick profits, but has long-term plans,” she added.

While the president declined to comment on the DPP presidential primary, in which she is challenged by her former Premier, William Lai (賴清德), she revealed some of her plans for the next mandate if she succeeds in winning the election next year, including organizing a Taiwan fair.

The fair will showcase to the world the development of Taiwan in artificial intelligence, green energy, and information and communications technology (ICT), according to Tsai. The MIT (made in Taiwan) label will shine across global markets once again, but as a stronger brand than ever before, she declared.

“Taiwan is a small country with a small population, but we are a good nation with good people,” said Tsai, emphasizing there is no reason to give up on the country and hand it over to someone else.