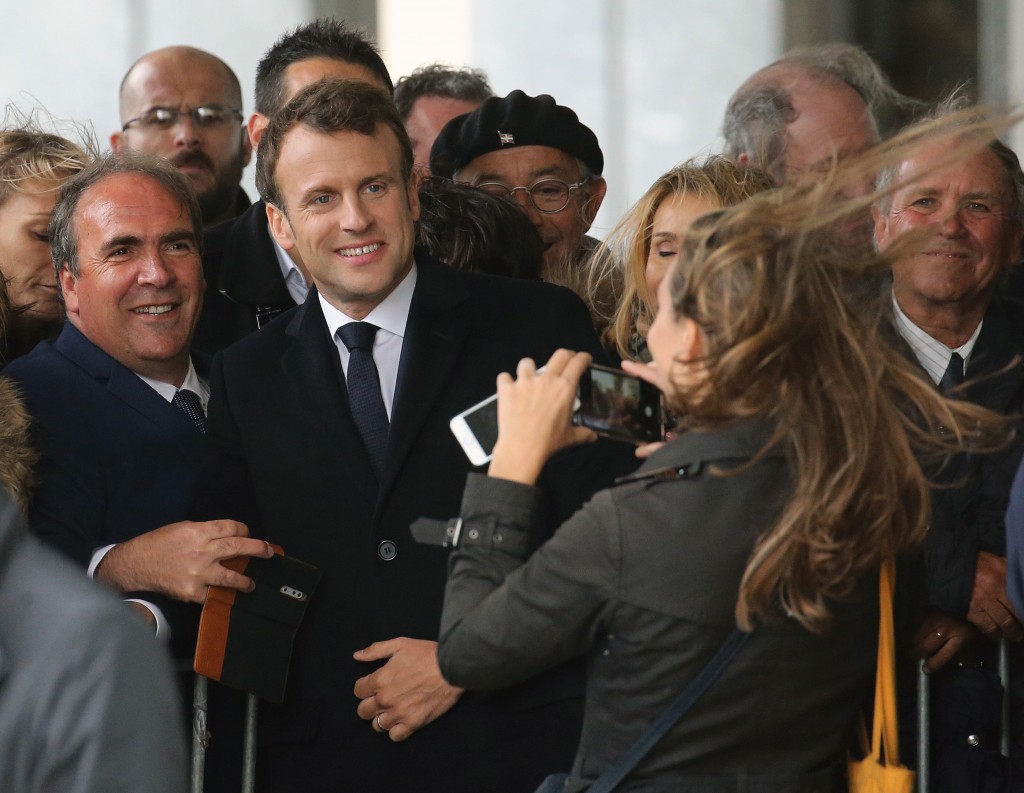 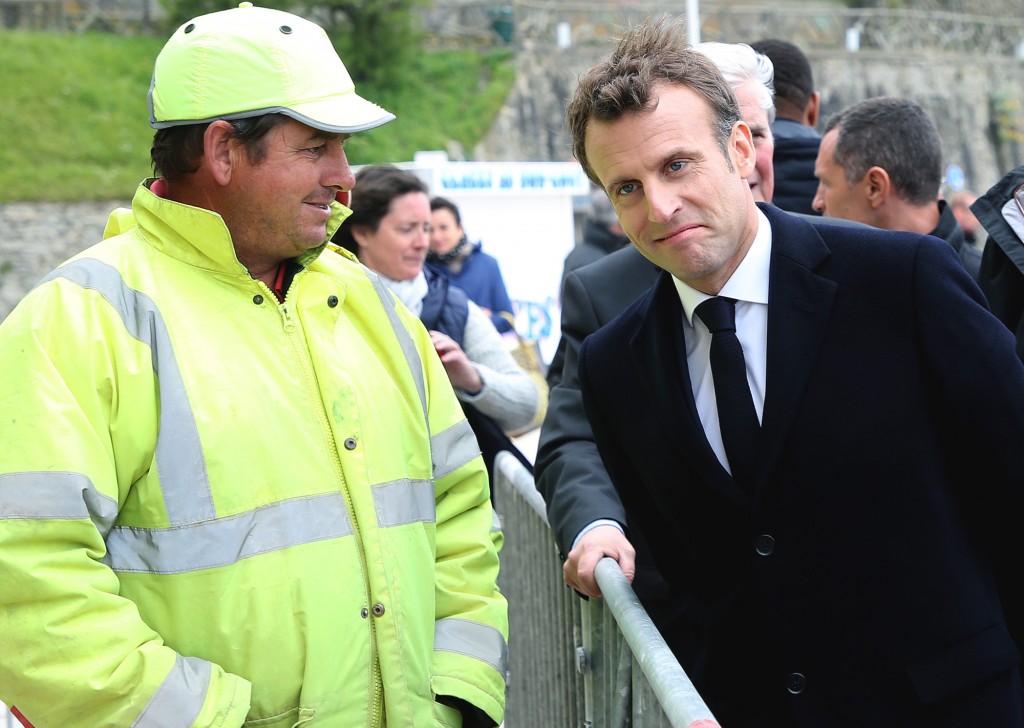 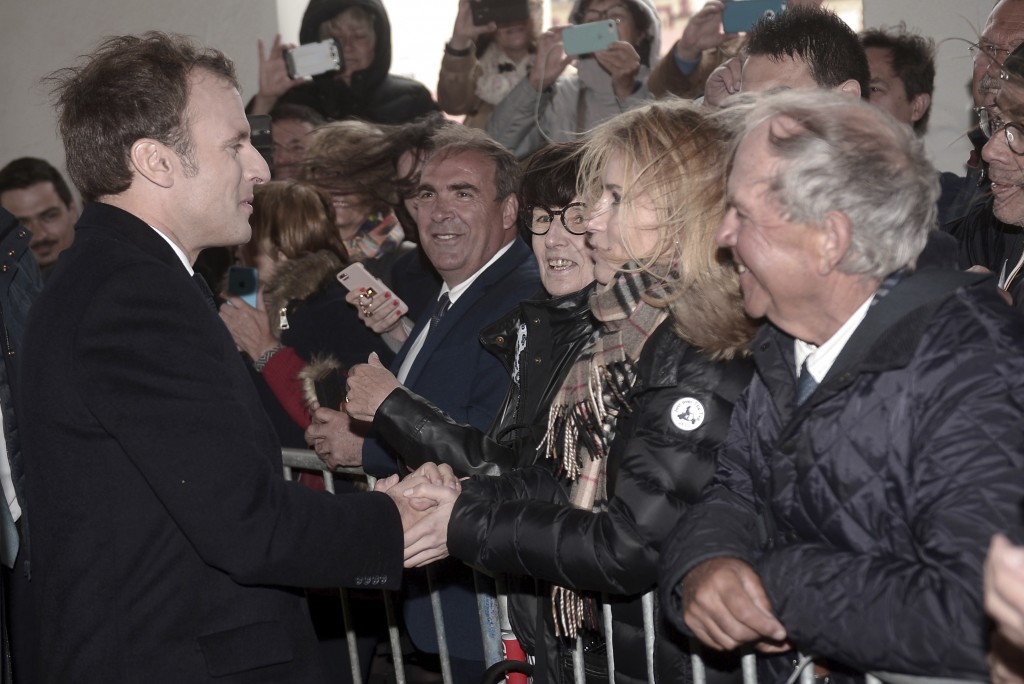 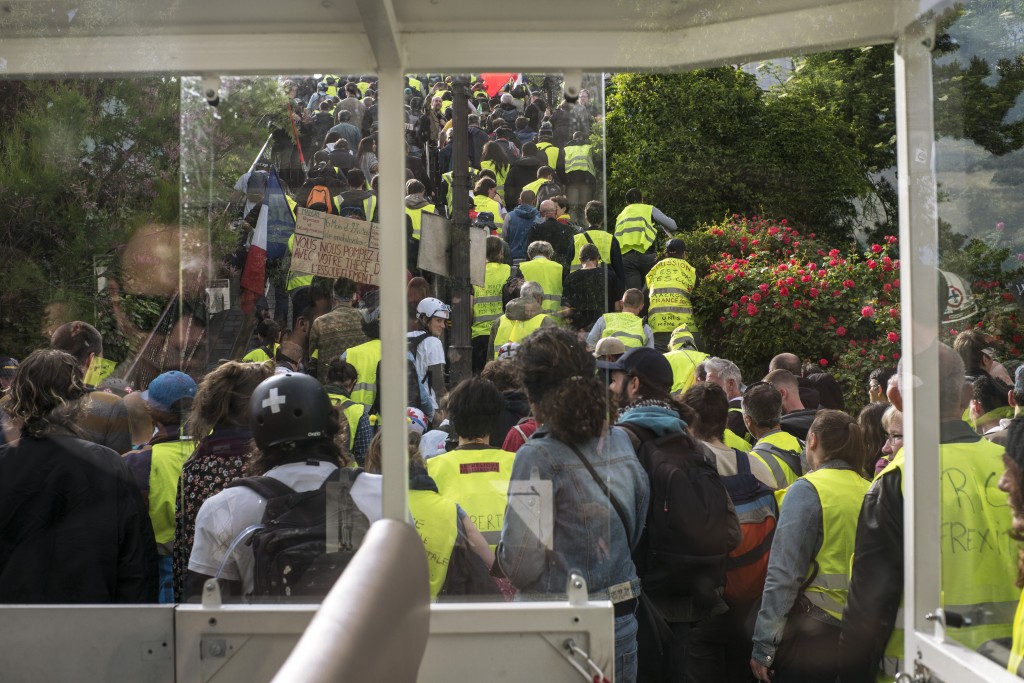 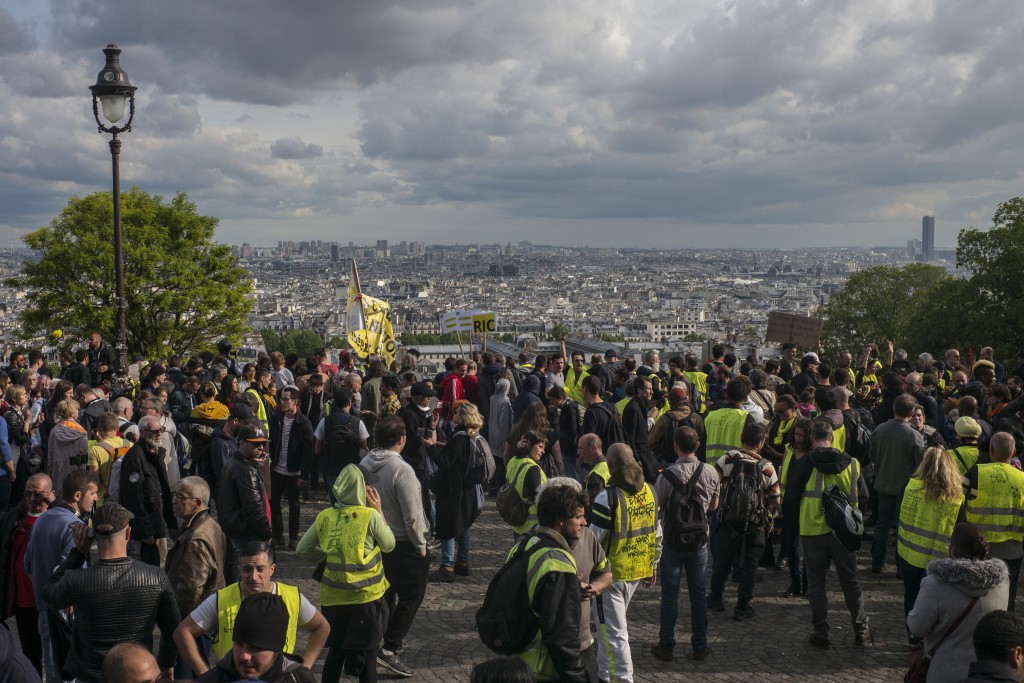 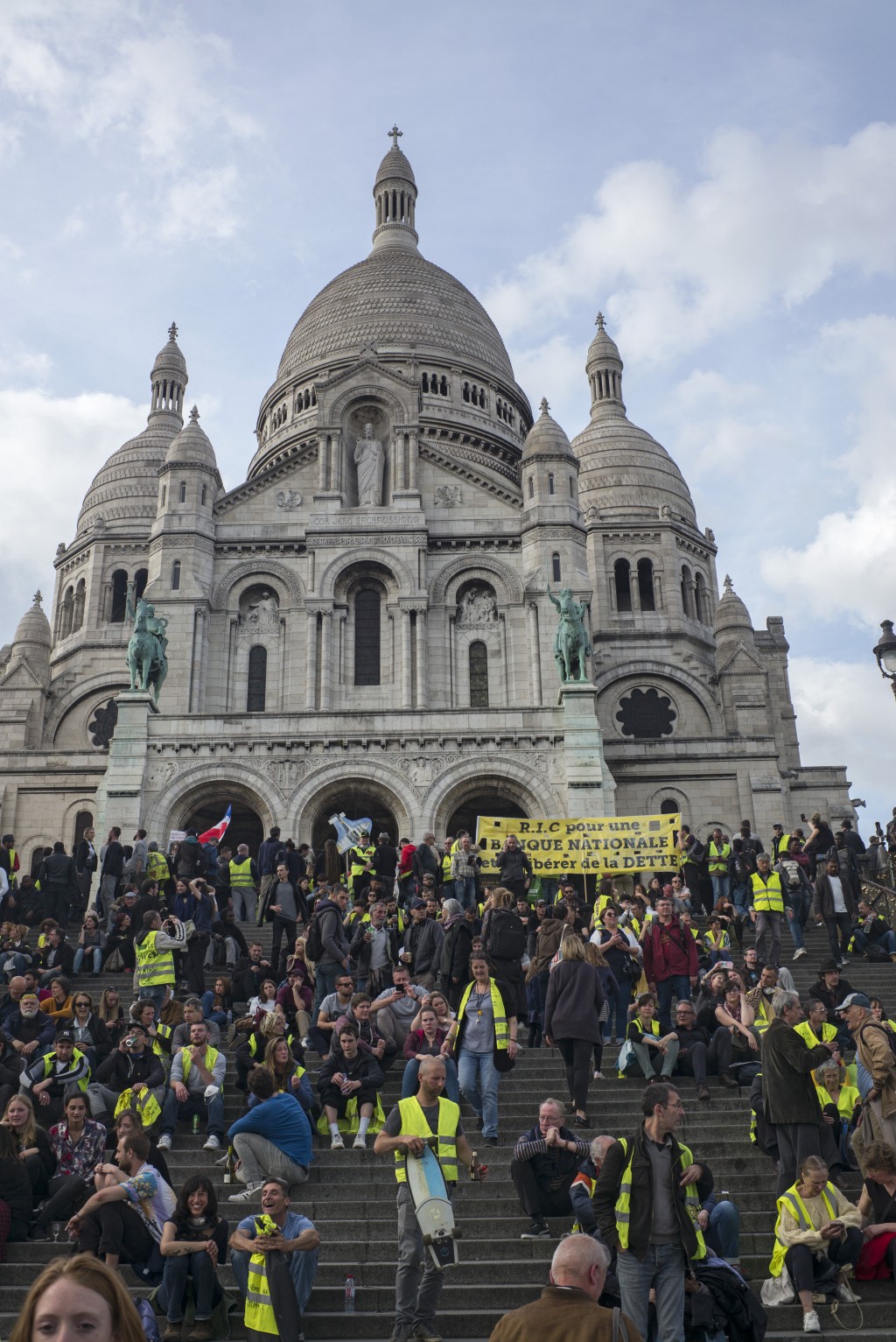 PARIS (AP) — French President Emmanuel Macron sees himself as Europe's savior and next week's European Parliament elections as a make-or-break moment for the beleaguered European Union.

But Macron is no longer the fresh-faced force who marched into a surprising presidential victory to the rousing EU anthem two years ago. His pro-Europe vision has collided with populists and national interests across the continent. And at home, his political vision has given rise to France's raucous yellow vest uprising over his government's pro-business policies.

Macron wanted the May 23-26 European Parliament elections to be the key moment that he could push his ambitions for a stronger Europe — but instead, nationalists and populists who criticized the 28-nation bloc could achieve unprecedented success.

They argue that EU leaders have failed to manage migration into the continent and remain out of touch with ordinary workers' concerns.

"We have a crisis of the European Union. This is a matter of fact. Everywhere in Europe, when you look at the past five to six years, in our country but in a lot of countries, all the extremes, extreme-rights, are increasing," Macron said Thursday, making an unexpected appeal for European unity on the sidelines of a technology trade show.

"On currency, on digital, on climate action, we need more Europe," he said. "I want the EU to be more protective of our borders regarding migration, terrorism and so on, but I think if you fragment Europe, there is no chance you have a stronger Europe."

In person, the 41-year-old Macron comes across as strikingly, sincerely European. A political centrist, he's at ease quoting Greek playwrights, German thinkers or British economists. France's youngest president grew up with the EU and has been using the shared European euro currency his whole adult life, and sees it as Europe's only chance to stay in the global economic game.

Macron has already visited 20 of the EU's 28 countries in his two years in office, and while he acknowledges the EU's problems, he wants to fix the bloc — not disassemble it.

Macron won the 2017 presidential election over France's far-right, anti-immigration party leader Marine Le Pen on a pledge to make Europe stronger to face global competition against the Unites States and China. Since then, he's had to make compromises with other EU leaders — and clashed with some nations where populist parties govern, from Poland to neighboring Italy.

Four months after his election, Macron outlined his vision for Europe in a sweeping speech at Paris' Sorbonne university, calling for a joint EU budget, shared military forces and harmonized taxes.

But with Brexit looming and nationalism rising, Macron has had to reconsider his ambitions. He called his political tactics with other EU leaders a "productive confrontation."

"In Europe, what is expected from France is to clearly say what it wants, its goals, its ambitions, and then be able to build a compromise with Germany to move forward" with other European countries, Macron said last week.

Macron stressed that despite her initial reluctance, German Chancellor Angela Merkel agreed last year to create a eurozone budget they hope will boost investment and provide a safety mechanism for the 19 nations using the euro currency.

In March, Macron sought to draw support for a Europe of "freedom, protection and progress" with a written call to voters in 28 countries to reject nationalist parties that "offer nothing."

And he proposed to define a roadmap for the EU by the end of this year in a discussion with all member nations and a panel of European citizens.

"There will be disagreement, but is it better to have a static Europe or a Europe that advances, sometimes at different paces, and that is open to all?" he asked.

France and Germany are the two heavyweights in Europe, and Macron can also count on cooperation from pro-European governments of Belgium, The Netherlands, Spain, Portugal and others.

He has made a point, however, of not yet visiting Hungary or Poland, two nations led by populist leaders whom Macron accused last year of "lying" to their people about the EU.

France has also been entangled in a serious diplomatic crisis with Italy over migration into Europe. Italy's anti-migrant Interior Minister Matteo Salvini has repeatedly criticized Macron and is backing his rival Le Pen's National Rally party in the election this week that aims to fill the European parliament's 751 seats.

Macron has little chance to repeat Europe-wide what he did in France: rip up the political map by building a powerful centrist movement that weakened the traditional left and right.

The campaign for Macron's Republic on the Move party is being led by former European Affairs Minister Nathalie Loiseau under a banner called "Renaissance." The party wants to associate with the pro-market ALDE alliance to create new centrist group at the European Parliament.

But across the continent, the centrists are not expected to come out remotely on top but rank third or even lower behind the parliament's traditional two biggest groups, the right-wing European People's Party and the left-wing Socialists and Democrats group.

Even at home, Macron is far from certain of being able to claim victory in the European vote. Polls suggest his party will be among France's top two vote-getters in the election, which takes place in France on May 26.

But its main rival, the far-right National Rally party, is determined to take revenge on Macron beating Le Pen so decisively in 2017.

Macron's political opponents across the spectrum are calling on French voters to seize the European vote to reject his government's policies.

While he won 64% of the presidential vote in 2017, French polls show that Macron's popularity has been around half that for the past year.

It reached record lows when France's yellow vest movement broke out last fall, demanding relief from high taxes and stagnant wages for French workers, then slightly rose as extensive violence during yellow vest protests, especially in Paris, dampened support for the movement's cause.

Still, the yellow vests are not going away. New protests against Macron and his government are planned for the EU election day.

Catherine Gaschka in Paris contributed to the story

For more news from The Associated Press on the European Parliament elections, go to https://www.apnews.com/EuropeanParliament