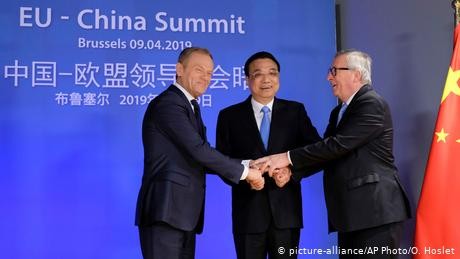 The European Union and China pledged to strengthen their trade relationship and work towards opening up China's economy for foreign investors at a summit in Brussels on Tuesday.

The annual summit comes a month after the European Commission branded Beijing a "systemic rival" over what they said were unfair trade practices, and amid an ongoing US trade war with China.

The main takeaways from the summit:

In a seven-page joint declaration that was signed after last-minute negotiations, Brussels and Beijing agreed to the following changes:

"We will not treat EU companies, especially those registered in China, with discriminatory policy, including solely foreign-owned companies in China," Li said. "And likewise Chinese companies should not be discriminated against in their operation in the European Union, he added.

"This is a breakthrough. For the first time China has agree to engage with Europe on this key WTO reform," Tusk said.

The EU has grown increasingly concerned about Chinese state-led companies buying key European assets, while the level of market openness is not reciprocated in China.

Politicians and businesses in the EU and the United States have criticized China for forcing foreign companies to hand over intellectual property in order to gain access to China's economy — which is the second largest in the world.

Beijing has repeatedly pledged to open up its economy to foreign companies and investors, but critics say that China hasn't done much to fulfill this promise.

As US President Donald Trump's administration is currently embroiled in a trade war with China, Washington has also been pressuring Brussels to take steps against Beijing. Most notably, the US has urged the EU to ban Chinese tech giant Huawei over the company's alleged ties to state security.

Prime Minister Li will now head to Croatia for another European summit in Croatia on Thursday and Friday with the so-called 16+1 summit. The meeting grants central and eastern European states the chance to meet alone with Beijing, in a move that has garnered criticism from other European countries.