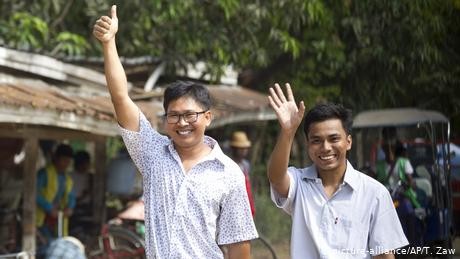 Two Reuters journalists who were jailed in Myanmar in 2017 for breaking the Official Secrets Act have been released from prison, the news agency reported Tuesday.

Both men left the gates of Insein Prison, near Yangon, surrounded by media and well-wishers. A smiling Wa Lone gave a thumbs-up, and said he was grateful for international efforts to secure their release.

"I'm really happy and excited to see my family and my colleagues. I can't wait to go to my newsroom," Wa Lone said.

A court had convicted the men in September and sentenced them to seven years in prison. The Supreme Court rejected a final appeal against the sentence in April.

President Win Myint has pardoned thousands in mass amnesties over the past month. Authorities in Myanmar customarily release prisoners about the time of the traditional New Year, which began on April 17.

Both men had been writing an article on their investigation into the killing of 10 Rohingya Muslim men and boys by security forces before their arrest.

Reuters said the pair did not commit any crime, and it had called for their release.

"We are enormously pleased that Myanmar has released our courageous reporters," said Reuters editor-in-chief Stephen Adler.

Violence against the minority Rohingya group caused more than 730,000 people to flee into neighboring Bangladesh, according to UN figures.

The UN and other human rights groups have accused Myanmar of ethnic cleansing and genocide.

The two journalists attracted the support of prominent rights lawyer Amal Clooney, who represented them in court. Rights groups and legal experts said the case was riddled with irregularities.

"It has been an honour to represent Reuters and the two journalists in this case and I hope that their release signals a renewed commitment to press freedom in Myanmar," Clooney said.

Steven Butler, of the Committee to Protect Journalists told DW that the imprisonment had been a "move by the military to intimidate other journalists." The fact the men remained in jail so long despite international pressure showed that "the military had achieved its goals and there was no point keeping the men in any longer."

Butler added that his organization, which helped int he effort to secure the journalists' release, did not see "any evidence" that efforts to supress press freedom would ease any time soon.