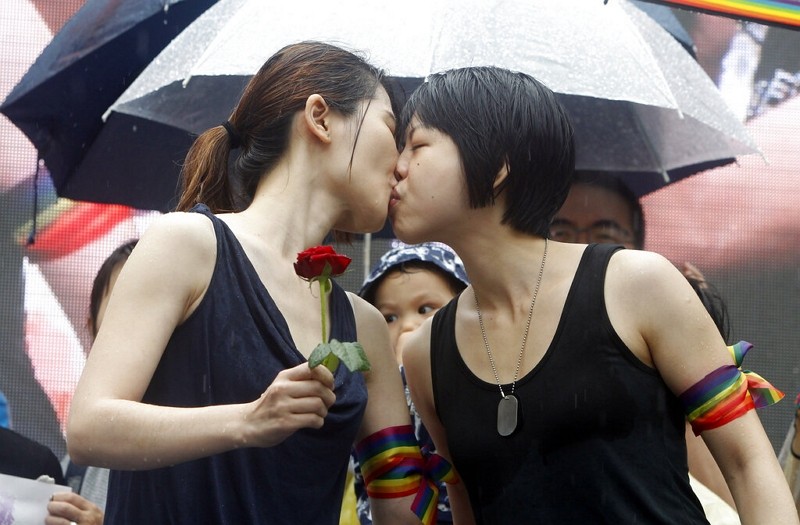 More than 250 same-sex couples are waiting in line to be registered as spouses at government household affairs agencies around Taiwan after it became the first country in Asia to legalize same-sex marriage.

The Ministry of the Interior (MOI) started updating its household registration system in response to the passage of the law Friday afternoon, Deputy Interior Minister Chen Tsung-yen (陳宗彥) said at a news conference.

A total of 254 same-sex couples had made their reservations at different household registration offices to register their marriage as of May 7, prior to the bill's passage, Chen said, in anticipation that they would be allow to go ahead with the process on May 24.

Regardless of the outcome of Friday's vote, a Constitutional Court ruling on May 24, 2017 that declared the prohibition of same-sex marriage unconstitutional required legislation to be passed within two years to guarantee same-sex couples the right to marriage equality.

If no such legislation was passed same-sex couples would be allowed to register their marriages under the existing Civil Code as it applies to heterosexual couples on May 24, 2019, according to the ruling.

With passage of the new law, which allows two persons of the same gender, aged 18 or older, to register a marriage, with at least two witnesses signing the registration document, same-sex couples are expected to have the same rights as married heterosexual couples.

The marriage registration process will also be the same, and married same-sex partners will be referred to as "spouses," but they will be identified as a "same-sex" couple in their household registration.

Based on the MOI's plan, new items like same-sex marriage registration, revocation and termination will be added to the household registration system.