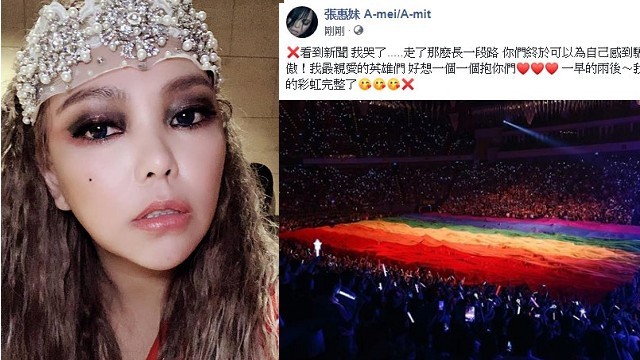 TAIPEI (Taiwan News) -- Top Taiwanese entertainers, including A-mei (張惠妹) and Jolin Tsai (蔡依林), have reacted with joy on social media in response to today's (May 17) passage of Taiwan's same-sex marriage law, the first such law in Asia.

At around 1 p.m. this afternoon when it was announced outside of the Legislative Yuan that Article 4 had passed including the "marriage registration" clause, the crowd cheered. Tai shouted out, "I wish that all lovers can be married, because too many comrades and friends are beginning to worry about sending out red envelopes. It could be a lot. But as long as everyone can enjoy equal rights, that's what I hope most," according to the report.

Upon hearing the news that the core articles had passed, A-Mei, who is well known for championing LGBT rights for many years, took to Facebook to write the following:

"I cried when I saw the news... You can be proud of yourself after such a long journey! My dearest heroes want to have a complete rainbow after the early morning rain."

After hearing the news, Jolin Tsai posted a photo of a rainbow on Facebook and wrote:

"Congratulations!!!! Everyone deserves happiness! Wedding song don't forget the never-ending sunset, OK? (over and over, haha)."

Ella Chen (陳嘉樺), who is also very concerned about LGBT issues on Facebook wrote, "I hope everyone can understand and respect each other without discrimination, misunderstandings, or hatred. Although it is raining today, there will be a rainbow after the rain. Keep striving everyone."