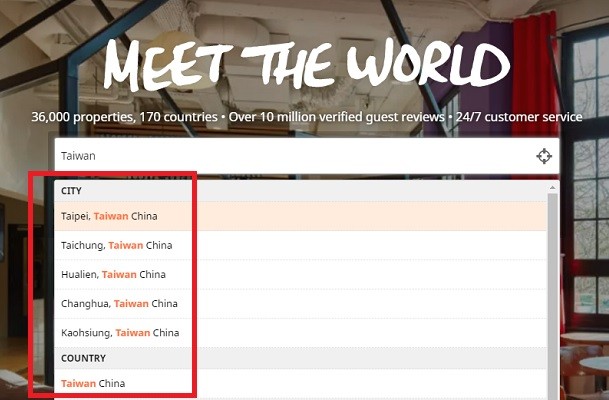 TAIPEI (Taiwan News) -- Hostel review and booking website Hostelworld has kowtowed to Beijing by changing its listing for Taiwan to Taiwan, China and sent a "creepy" email to a prospective customer justifying the change.

On Friday (May 17), an American living in Taiwan noticed that Hostelworld had changed its online listing for Taiwan to "Taiwan, China." He then posted on the social media platform Reddit a screenshot of Hostelworld's new listing for Taiwan showing it as part of China and wrote the caption "So, guess I'll be boycotting Hostelworld now..."

In addition to listing Taiwan as a part of China under its Country category, it also now has placed "China" after the names of all Taiwanese cities in its database, including Taipei, Taiching, Hualien, Changhua, and Kaohsiung.

Later that same day, he updated to his post to mention that he had sent an inquiry to the Hostelworld's customer service email address and said that "creepily enough" he received the following feedback letter within five minutes:

Thank you for your feedback on how Taiwan is listed on our website.
Please be advised that Hostelworld, as a global company with a presence in Shanghai, is required by Chinese law to list Taiwan as part of the Chinese territory on all our products, with significant consequences if we do not comply.

Taiwan News has contacted Hostelworld for comment, and on May 17 the company provided the following response:

"As a global company with an office in Shanghai, Hostelworld Group respects and is obliged to respect local laws in each market where it operates. We are required to list Taiwan as part of the Chinese territory on our products, when identifying it as a nationality or country."

After President Tsai Ing-wen took office, she refused to recognize the "1992 Consensus," and in response, China has been seeking to punish Taiwan by excluding it from international organizations, stealing away diplomatic allies, and intimidating government bodies and corporations, such as airlines, to delist Taiwan as a country.

The incident is the latest in a growing list of corporations that have kowtowed to China and removed Taiwan's status as a country from their websites. On May 6 of last year, White House spokesperson Sarah Sanders responded to attempts by Beijing to force private companies to list Taiwan as part of China as "Orwellian nonsense and part of a growing trend by the Chinese Communist Party to impose its political views on American citizens and private companies."