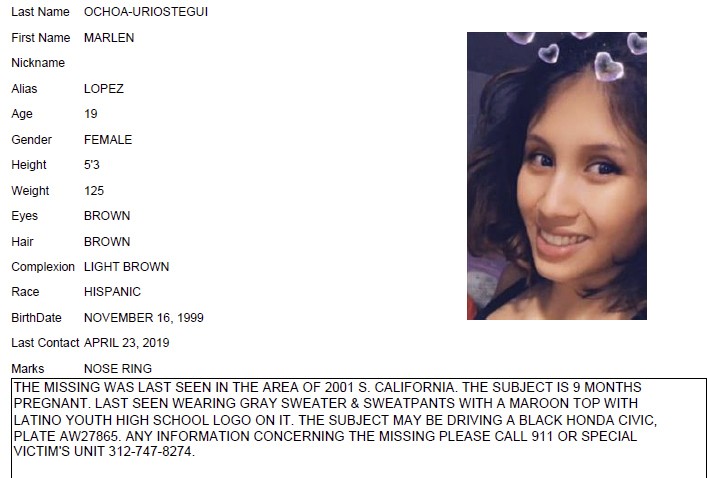 CHICAGO (AP) — The Latest on the slaying of a pregnant Chicago woman whose baby was cut from her womb (all times local):

A spokeswoman for the family of a Chicago woman who was strangled and had her baby cut from her womb says DNA tests led police to conclude the woman claiming to be the baby's mother was lying.

Sara Walker says detectives tested the saliva of the baby and that of the baby's father along with hair samples taken from the home of 19-year-old Marlen Ochoa-Lopez to determine parentage. Ochoa-Lopez's body was discovered Wednesday, three weeks after she disappeared.

Authorities say that the same day Ochoa-Lopez vanished, a 46-year-old woman called 911 about a baby in distress. That woman has been taken into custody, as have two other people. Charges are expected to be filed Thursday afternoon.

Police say the baby is hospitalized in grave condition and is not expected to survive.

Police initially identified the victim as Marlen Ochoa-Uriostegui, but the family has since said she had been using her husband's last name.

A Chicago police spokesman says a baby isn't expected to survive after being ripped from his mother's womb after she was strangled.

Anthony Guglielmi says three people are in custody and charges including murder are pending.

Authorities say the woman, 19-year-old Marlen Ochoa-Uriostegui, had gone to a Chicago home in response to a Facebook offer of free clothes.

The nine-months-pregnant Ochoa-Uriostegui was last seen leaving a high school on April 23. That was the same day paramedics were called to the home on the Southwest Side about a newborn with problems breathing.

Guglielmi is calling it an "unspeakable act of violence."

This story has been corrected to reflect the baby as a boy.

A body found behind a home on Chicago's Southwest Side has been identified as that of a 19-year-old pregnant woman who disappeared last month.

The Cook County medical examiner's office says the body of Marlen Ochoa-Uriostegui was discovered after several people were taken into custody at the home. No charges against those in custody have been announced.

The medical examiner announced Wednesday Ochoa-Uriostegui died of ligature strangulation, and her death is considered a homicide.

Ochoa-Uriostegui was nine months pregnant when she disappeared April 23 after leaving her high school. Authorities haven't said a body of an infant has been found.

However, Chicago Fire Department spokesman Larry Merritt tells the Chicago Tribune paramedics were called to the home for a newborn with problems breathing on the same day the woman disappeared.