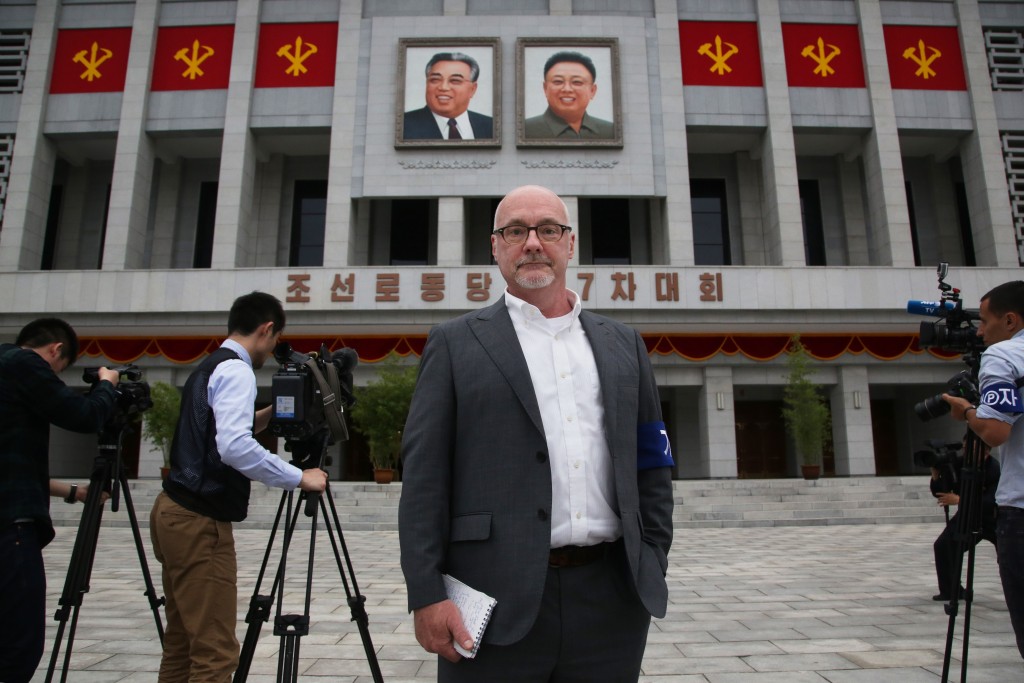 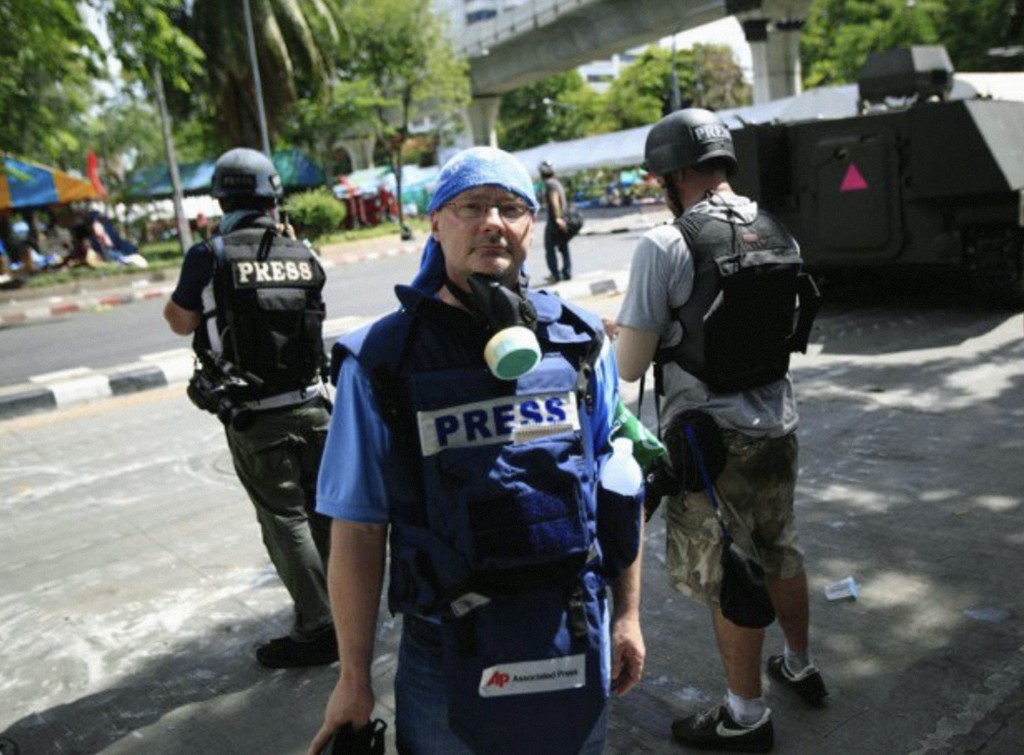 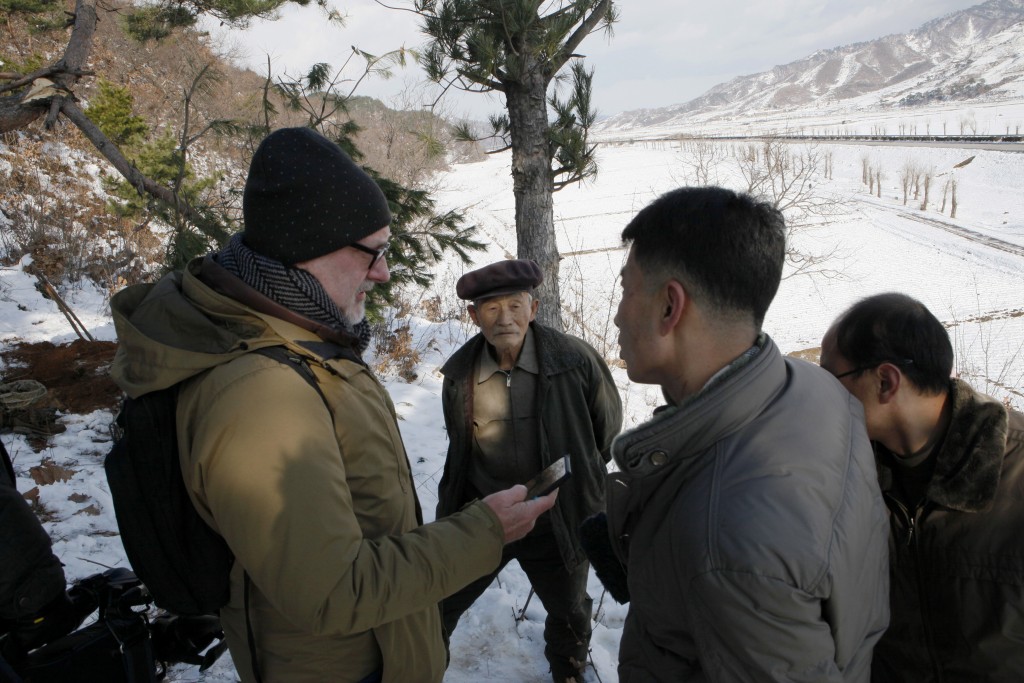 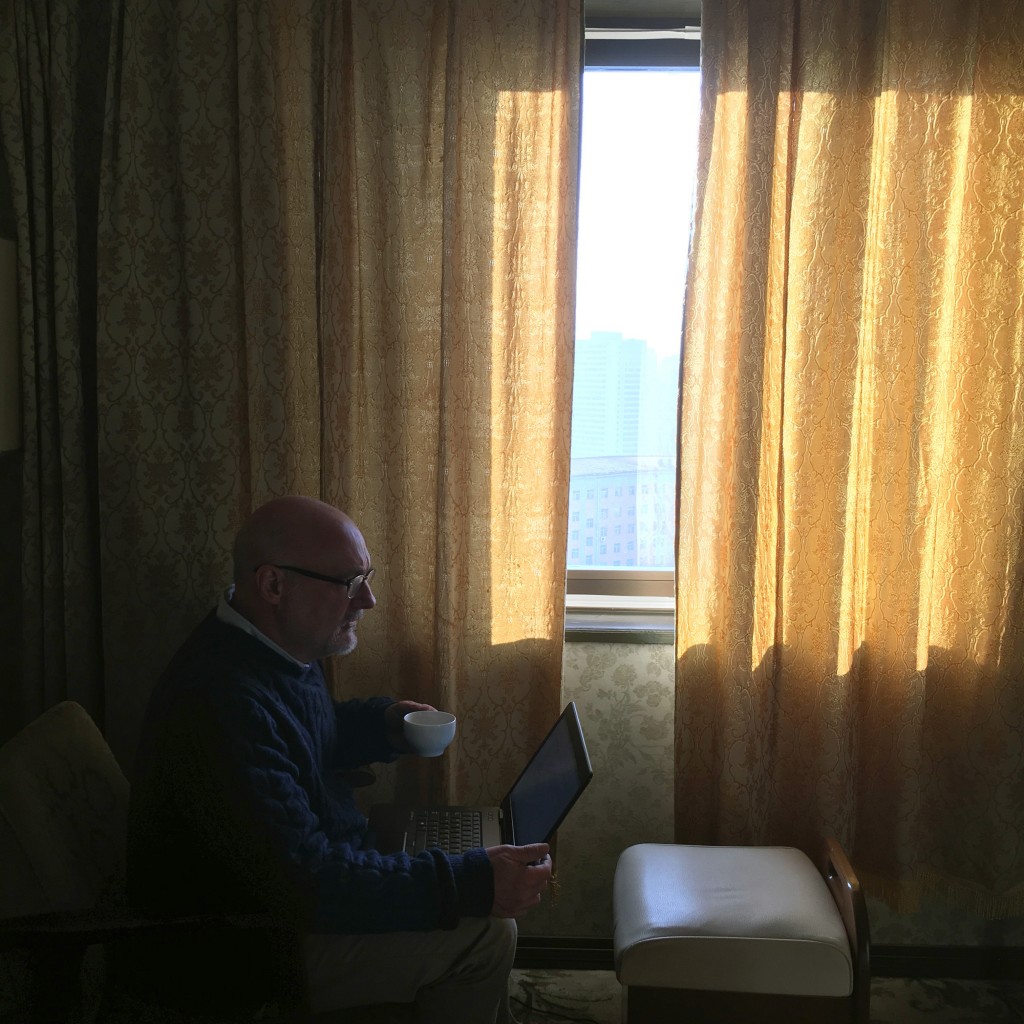 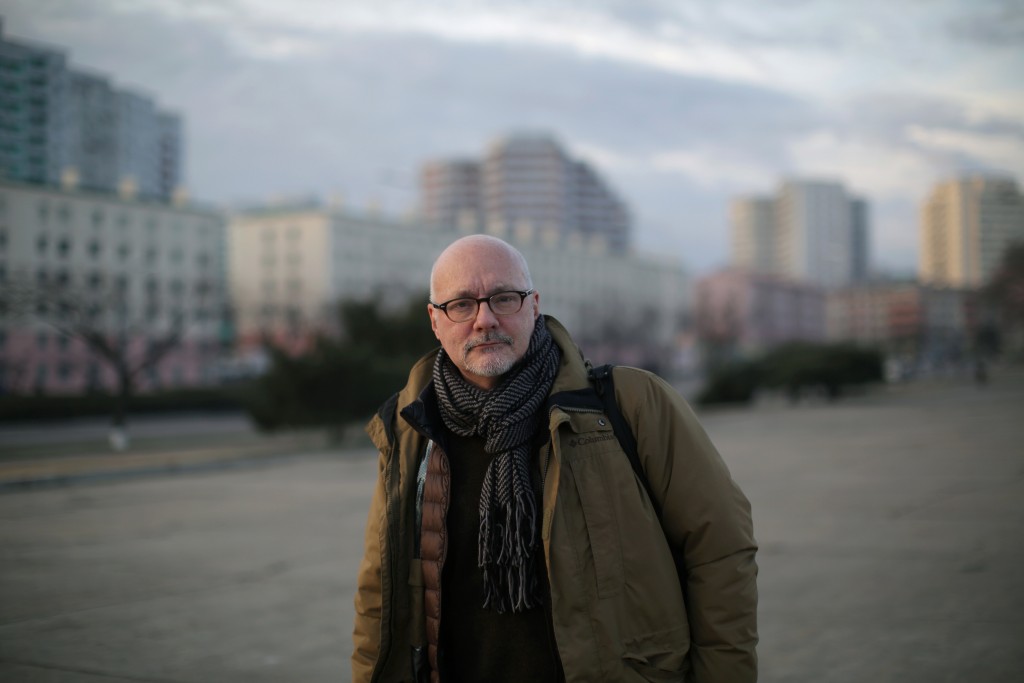 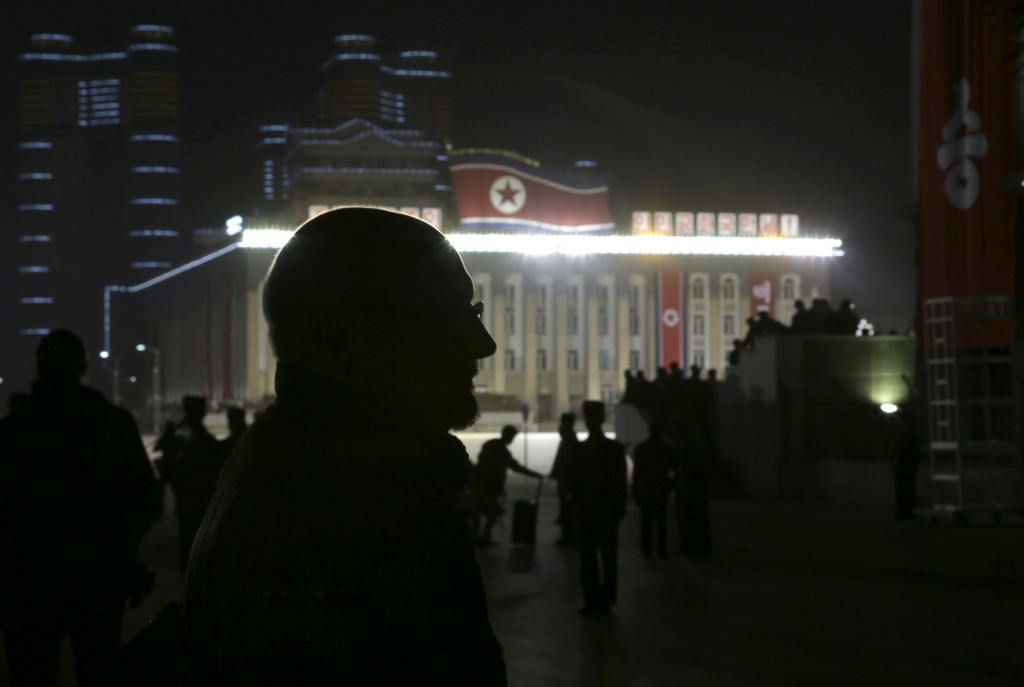 SEOUL, South Korea (AP) — Eric Talmadge, who as North Korea bureau chief for The Associated Press tenaciously chronicled life and politics in one of the world's least-understood nations, has died. He was 57.

Talmadge died this week in Japan after suffering a heart attack while running.

A decades-long resident of Japan with deep expertise on Asian security and military issues, Talmadge seemed to have found his ideal job when he was appointed in 2013 to lead the AP bureau in Pyongyang, North Korea's capital. From his base in Tokyo, he traveled almost monthly to report on the nuclear-armed country's remarkable evolution under its young leader, Kim Jong Un, who took over after his father died in 2011.

"For years, Eric's sharp work in North Korea has helped shape how the entire world saw a country that many of us knew little about," said Sally Buzbee, AP's executive editor. "He took that responsibility very seriously, and it was never far from his mind."

Talmadge was one of only a few international journalists with regular access to North Korea, where the AP established a video news office in 2006 and a text and photo bureau in 2012. With his frequently exclusive on-the-ground view, Talmadge latched onto and reveled in the small, telling details that upended widespread Western stereotypes about North Korea.

There were few journalists more insightful about the North's push to develop atomic weapons capable of striking the United States. But Talmadge also filled the AP wire with stylishly written stories of daily life, often seeded with traces of his bone-dry sense of humor.

He wrote about a beer festival in Pyongyang, where "brews are cheap and carry the ruling family's seal of approval." He wrote about the millions of North Koreans using mobile phones and the popularity of a game called "Boy General," describing it as "a spinoff of a new TV animation series that is both beautifully produced and genuinely fun to watch."

His intelligent, curious eye also regularly seized on the moments that often got lost or ignored in the frenzied coverage of the long-running nuclear standoff between Washington and Pyongyang. "He saw meaning in everything he came across," said Ian Phillips, AP's vice president for international news.

In 2014, Talmadge wrote of a weeklong road trip through North Korea — unprecedented for foreign reporters — that stopped at the forest-covered Kaema Plateau, known as the "Roof of Korea."

He showed readers the "blink-and-you-miss-them villages," the government propaganda slogans that covered posters, murals, banners and stones, and the isolated truck stops where elderly folks sat on weed-covered embankments and smoked hand-rolled cigarettes.

"It's quite possible," he wrote, that "none of them had ever seen an American before."

Talmadge was candid about the constraints of reporting in North Korea: No interviewing random people; no photos of checkpoints or military installations; no breaking away from ever-present government minders, "even on the loneliest of lonely highways."

In an example of the clear-eyed wit that often appeared in even his most technical reporting on military hardware, he wrote that the road trip's preapproved route, "to no one's surprise, didn't include nuclear facilities or prison camps."

Ted Anthony, who as AP's Asia-Pacific news director supervised Talmadge from 2014 to 2018 and accompanied him on multiple trips to Pyongyang, said Talmadge once warned him: "Don't ever think you really understand the North. It has more corners than anyplace I've ever been."

"Eric was utterly certain that with enough work and curiosity and stick-to-it-iveness, he could genuinely help the world understand North Korea. And he did," Anthony said. "He wanted to reach people who'd never really thought much about the country, and he would pull out all the stops to show them the North Korea they never knew existed, and make them think critically about it."

Born in Renton, Washington, Talmadge spent much of his life in Japan, where was a high-school exchange student. Fluent in Japanese, he appeared often on Japanese TV as a commentator on North Korea. He was an avid bowler and meditator, and loved riding his bike and swimming. He was the author of a 2006 book, "Getting Wet: Adventures in the Japanese Bath." He is survived by his wife, Hisako, and two grown children, Sara and Eugene.

Talmadge joined the AP in Tokyo in 1988 after working for the Mainichi Shimbun, one of Japan's national newspapers.

He reported throughout Asia for the AP and was a major contributor to the news agency's award-winning coverage of the deadly earthquake and tsunami that hit Japan in 2011, and the nuclear disaster that happened in its aftermath.

Before becoming Pyongyang bureau chief, he led a team of AP journalists focused on military and security issues in the Asia-Pacific region, while also serving as the news editor for the Tokyo bureau.

Mari Yamaguchi, an AP correspondent who joined the Tokyo bureau the same year as Talmadge, said his reporting interests ranged from Japan's imperial family to the yakuza criminal gangs to the Aum Shinrikyo cult, which carried out a deadly gas poisoning on the Tokyo subway in 1995.

"I was always impressed by his fairness, balance and sense of justice," Yamaguchi said.

But Talmadge seemed especially suited to reporting in North Korea. His Instagram and Twitter accounts were filled with images of cute kids mobbing him in Pyongyang on their way home from school, with shots of the city's pizza delivery services and aerobics classes and, of course, with video of mesmerizing rows of goose-stepping soldiers.

One video tweet from Yokohama, the port city outside of Tokyo where he made his home, showed sightseeing boats gliding beneath the ephemeral cherry blossoms of early spring: "Because everything isn't about where I have to go for work."

Talmadge's sense of humor shone through even in his internal AP memos on the Pyongyang bureau's operations. A picture of a chain-smoking 19-year-old chimpanzee mentions dryly that the ape smokes about a pack a day: The Pyongyang zoo officials "insist, however, that she doesn't inhale."

Wong Maye-E, who worked alongside Talmadge during the five years she spent as chief photographer for North Korea, remembers sitting in their hotel in Pyongyang during a power outage one night, decompressing after a tough day's reporting, the room's windows thrown open and Steely Dan playing on Talmadge's phone as they watched the blinking lights from the flashlights of people going up and down the stairwells of nearby apartment buildings.

"He was very patient in a place that really tests your patience," Wong said.

His love of bowling, Wong said, also came in handy in the North, where he liked to amaze residents by showing off how his intense bowling habit had made his right arm much more muscular than his left.

Talmadge continually pushed to expand the AP's presence in the North, negotiating with the government for more and longer reporting trips and better access. He prided himself on keeping his stories free of the clichés about North Korea so prevalent in outside media.

"I think there is a tendency abroad to caricature North Korea in ways that aren't constructive, and to resort to dismissiveness or mockery much too easily," Talmadge told The Washington Post in 2015. "During my time there, I have been surprised, and reassured in a way, to see how average North Koreans care about the same things everybody else does — their family, their finances, their health, their friends, how to get by."

And, he said, his immersion in the North made him appreciate even more his life outside the country.

"Every time I come back home, I wake up the first morning thinking, 'I can go anywhere I want today,'" he told the Post. "I could go to the beach, I could go see a movie, I could get on a plane and go to Florida if I wanted. Even if, in the end, I just stay home and eat potato chips on the couch, it's a very liberating feeling. I don't take it for granted anymore."

To see a selection of Talmadge's photos from North Korea and elsewhere, find his account on Instagram at @erictalmadge.