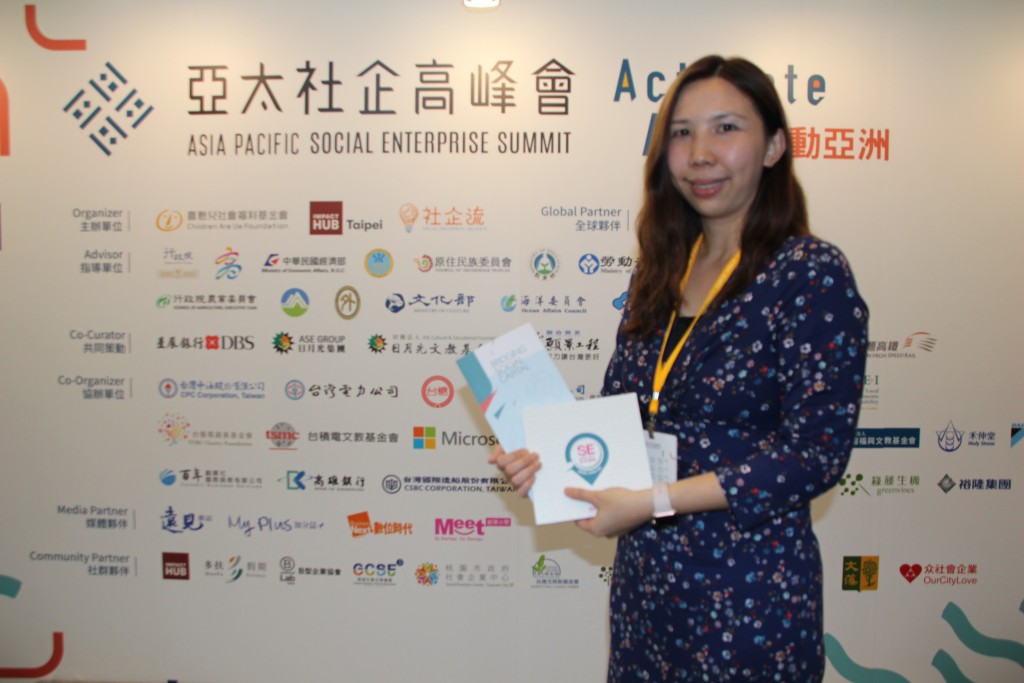 The center took home a Social Progress award at the 2019 Asia Pacific Social Enterprise Summit (APSES) in Kaohsiung. Taiwan News spoke to representative Jessica Tam to gain a better insight into its achievements.

How was the HKSEBC first established?

We are one of the departments of the Hong Kong Council of Social Service, which has a long history of over 70 years. Our center itself is just 11 years old.

We set it up because Hong Kong encountered some challenges in the early 2000s including SARS, the Asian financial crisis and some economic downturn. At the time, property rates were high and poverty rates were even higher, so the government set up a commission on poverty to find new solutions to the problems. They realized using conventional ways would no longer work, so we established the center in view of the international concept of the “social enterprise”—incorporating social missions into business models.

In 2005 we began advocating for the government to promote social entrepreneurship, and in 2008, we received funding from the government, Hong Kong bank and the HSBC foundation to set up the center. It was considered an innovative concept at the time because people thought it was the duty of the government or NGOs (non-governmental organizations) to solve social problems. We wanted to show that this could also be the responsibility of corporations.

How do you help corporations address social problems?

We first identify the problem itself. We're different from other APSES awardees in that most of the are social entrepreneurs, working directly with beneficiaries, whereas we are an intermediary organization whose objective is to change the system. What we do is not just identify social problems like poverty or exclusion, we also mend the gap between the government, the corporate sector and the social sector. We turn these gaps into opportunities.

In what ways do you support social enterprises?

We do quite a lot of work, but mainly focus on three areas: capacity building and incubation, business development and marketing, and public engagement.

The government commissioned us to manage a social innovation branch and set up a 500 million HKD fund. They assigned us to scout capable innovators, provide training and support for them, teach them how to conduct social impact assessments, and help them out with resources. We help the government compile a social enterprise directory, which is newly mapped each year.

In terms of business development and marketing, we have set up a platform called the Good Goods, which is Hong Kong’s first ever social entrepreneurial trading platform. How it works is: corporations want to have responsible procurement policies but don’t know where to find social enterprises, so we help match them up. This helps corporations realize their objectives of responsible procurement, and helps the social enterprises develop and expand their businesses.

Additionally, we work with universities to increase public engagement. We help them place students in social enterprises and give them training, because current students are the future leaders. We believe not all people need to be social entrepreneurs, but everyone should understand the concept of the social enterprise and how to use the model of innovation to solve social problems.

Can you give a recent example of a successful collaboration you mediated?

We’re currently working on a project initiated by Oxfam Hong Kong to increase Chinese proficiency among ethnic minority children. This is a huge policy gap because children under the age of 6 don’t always have the opportunity to learn Chinese. Because this is beyond the scope of government policy, it’s difficult for these children to catch up. Language skills are more difficult to develop beyond a certain age.

We've worked with Oxfam to develop a curriculum for two to three year old children and collaborated with two universities: Hong Kong University and the Education University of Hong Kong. It’s actually been very successful because the proficiency gap between children whose mother tongue is Chinese and those who come from an ethnic minority background has been narrowed from 100 to 50 percent.

We incubated the project from the very start and it is soon to become the first to scale up all the way from zero to an effective policy change. The government have said they will incorporate it into their policy agenda.

Our ultimate target is to bring systemic change rather than just enact change on the ground level. We don't just line up resources but also create sustainable differences.

Our center is almost totally self-funded; we don't receive regular funding from the government. We operate a little like a consultancy firm in that we charge fees for social enterprise projects and get commission from the trading platform. We have project funds, receive central funding occasionally, and have sales income to fund operations. It’s a fixed model, really.

What are your future plans for the organization?

I foresee in the coming 3 years that we will expand our team to include more than 35 members. We have continuously expanding since the beginning in 2008, when there were just two full-time staff members. Now there are almost 20.

Our focus will shift from supporting social enterprises to social innovation, social entrepreneurship and even social finance. We want to invite more social investors to support our enterprises. We are thinking to pool a new fund on our own so if there are good projects that don’t want government funding, they can come to us.

We are also trying to initiate more community-based projects in collaboration with the district government. We have a lot of projects now but not many of them are related to the local communities. Taiwan is doing very well at community-based innovation, especially in the south, so we came to the summit for inspiration.