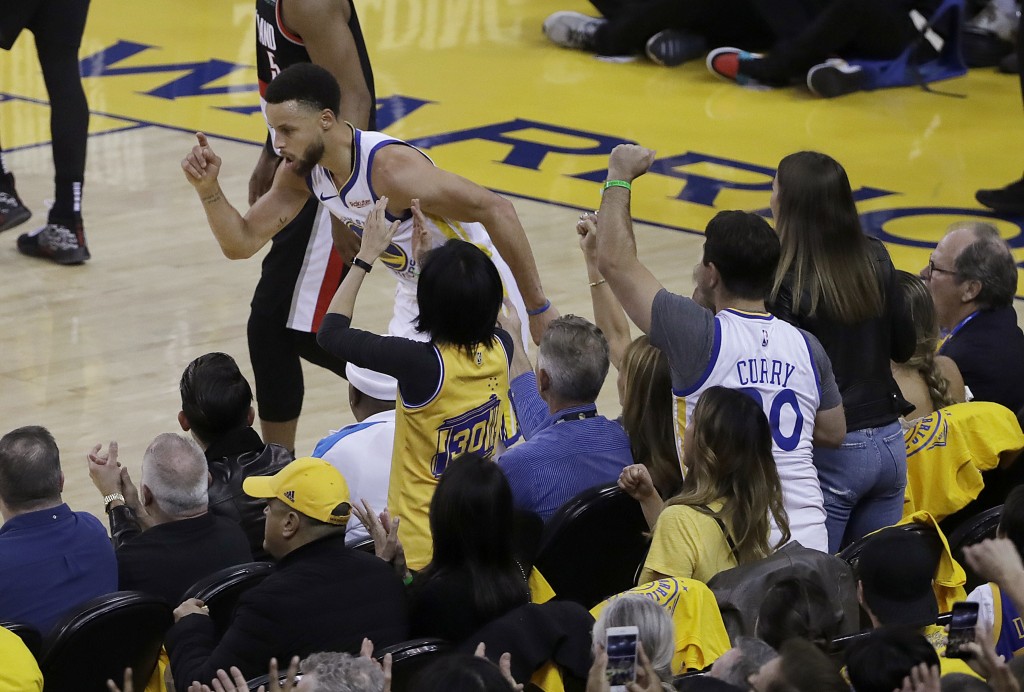 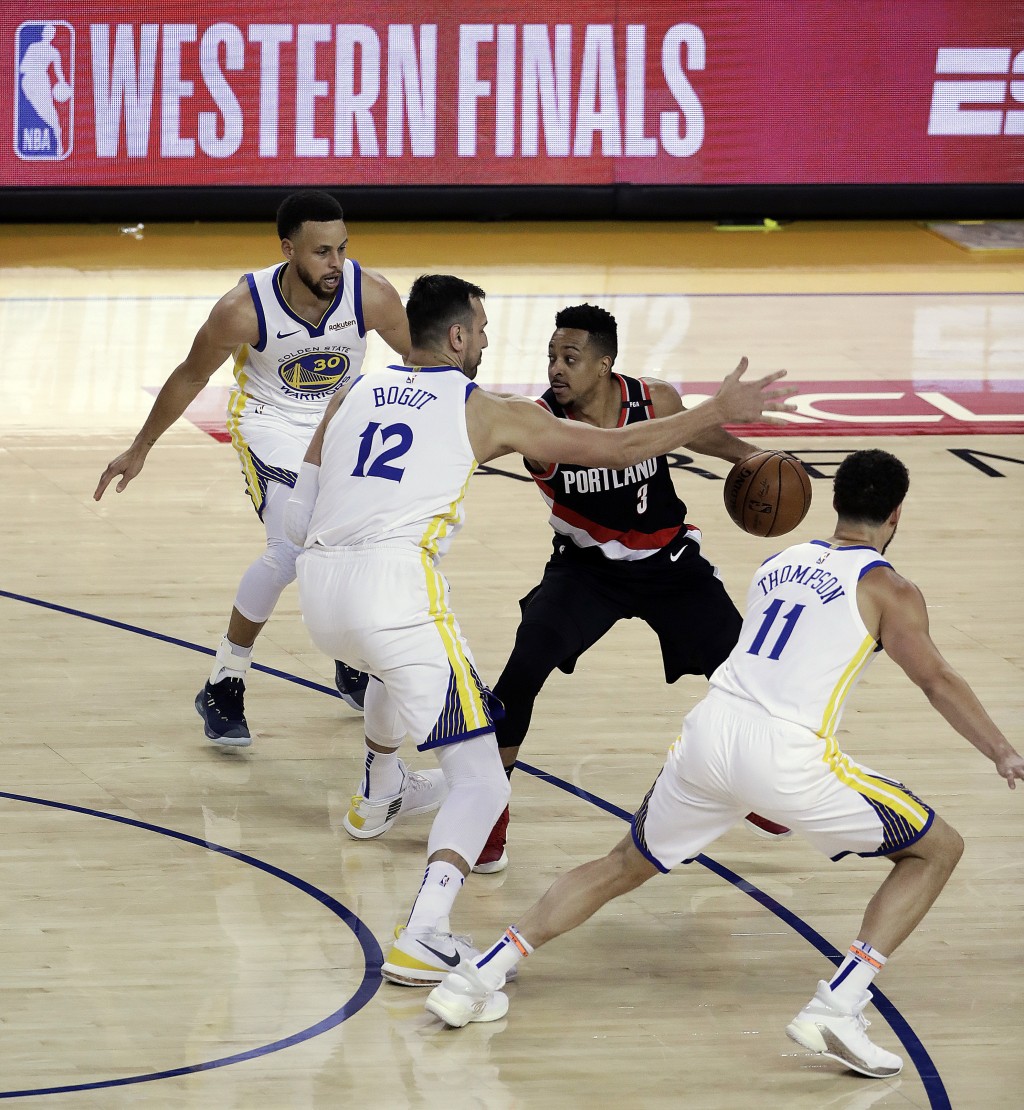 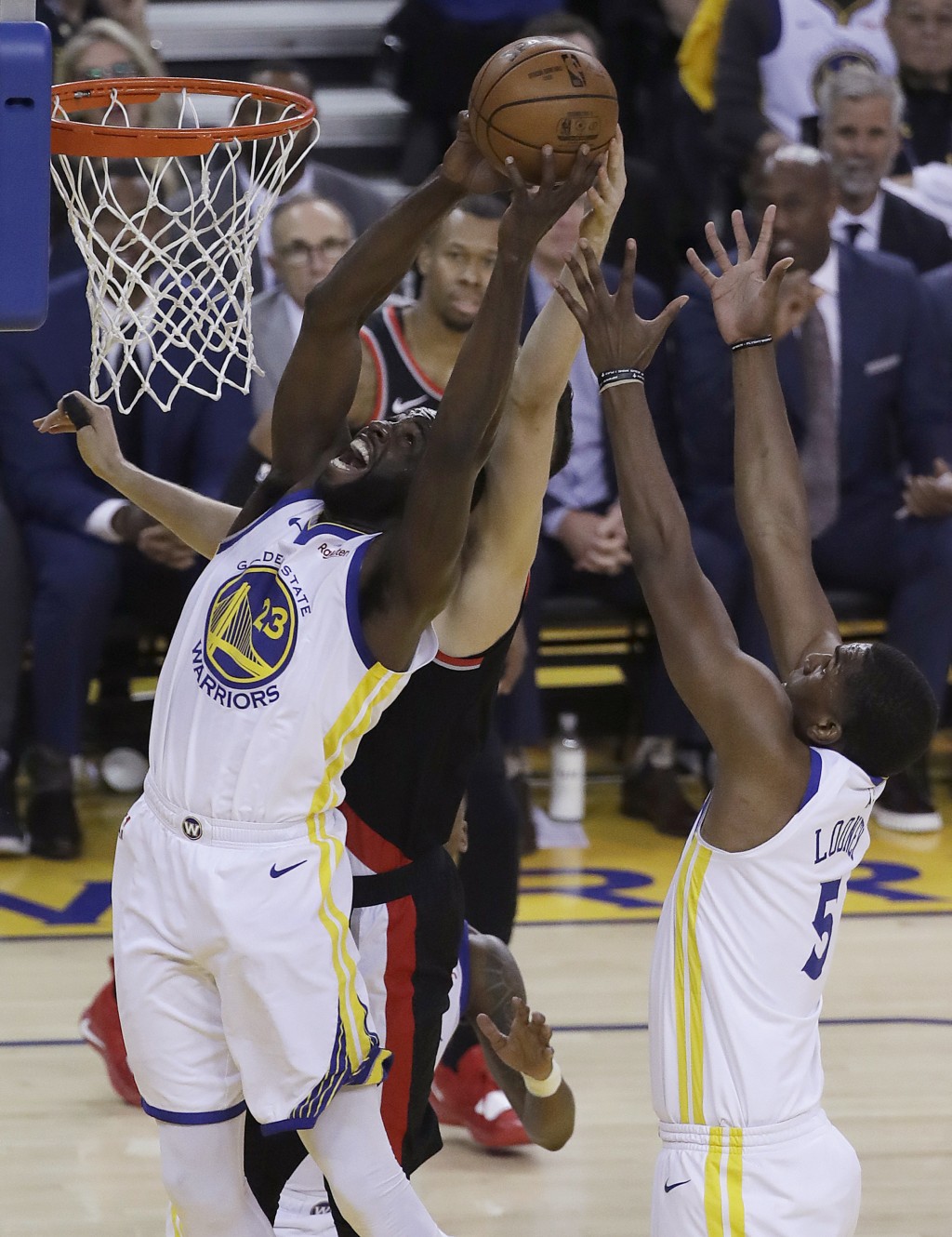 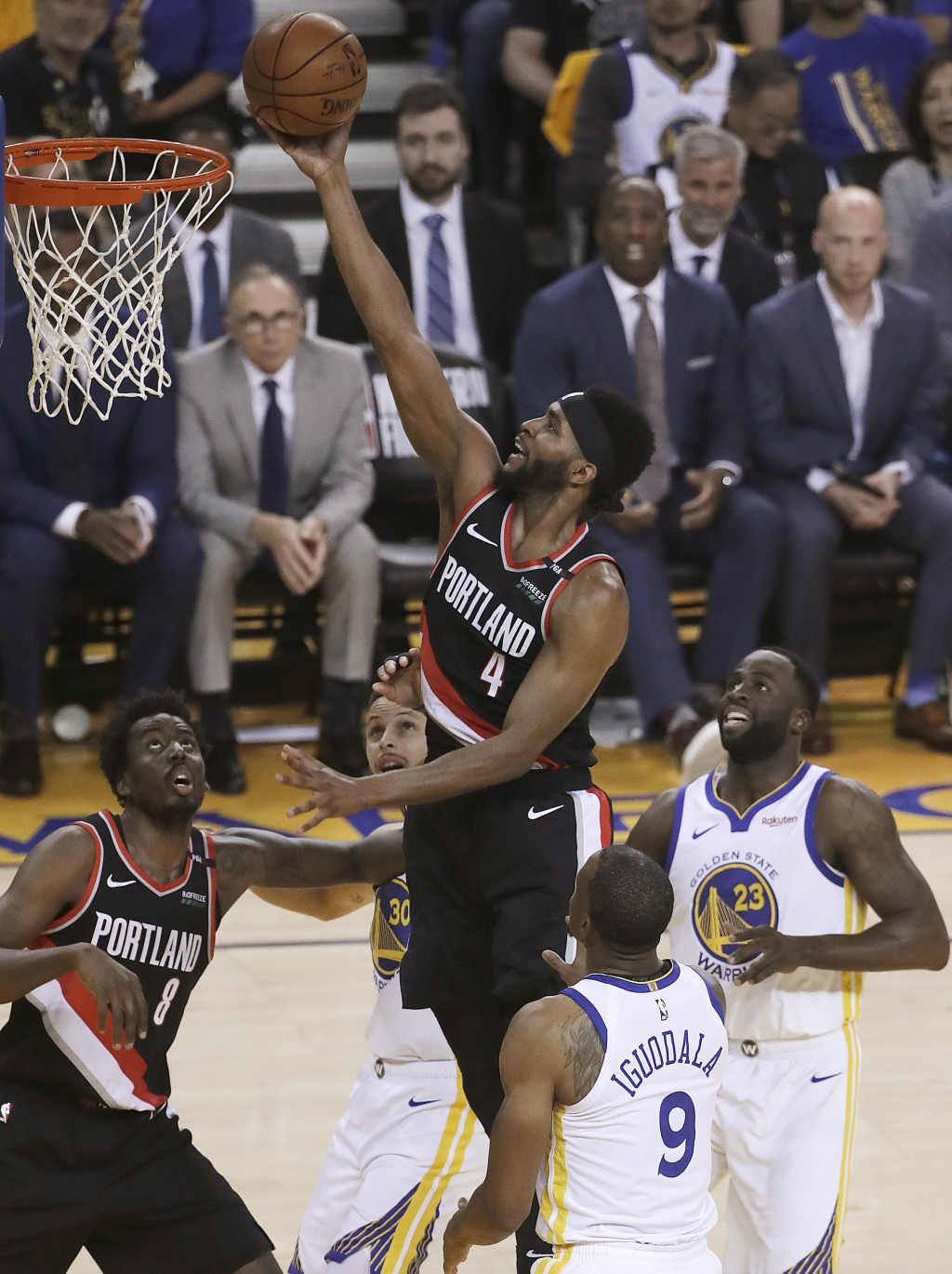 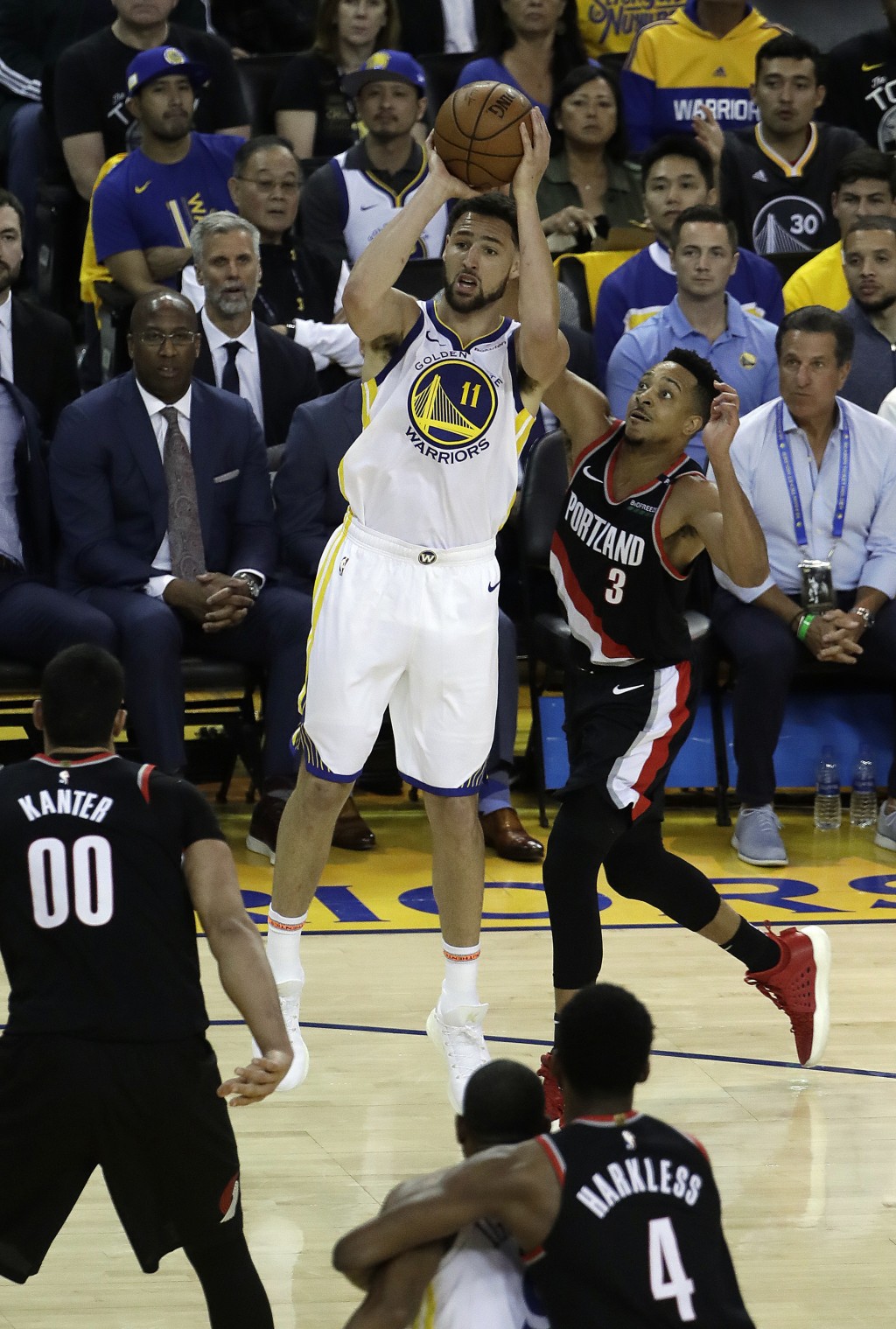 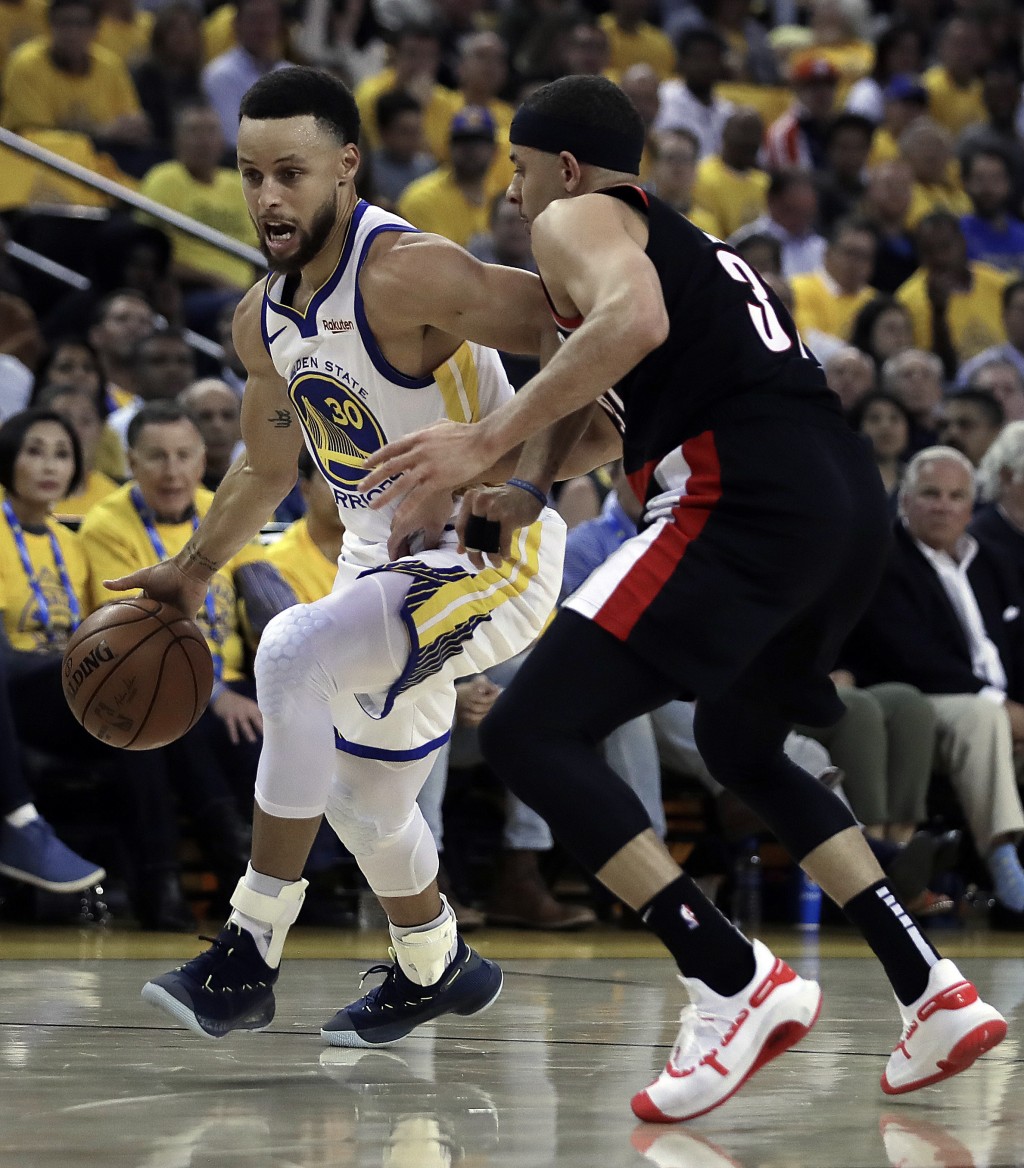 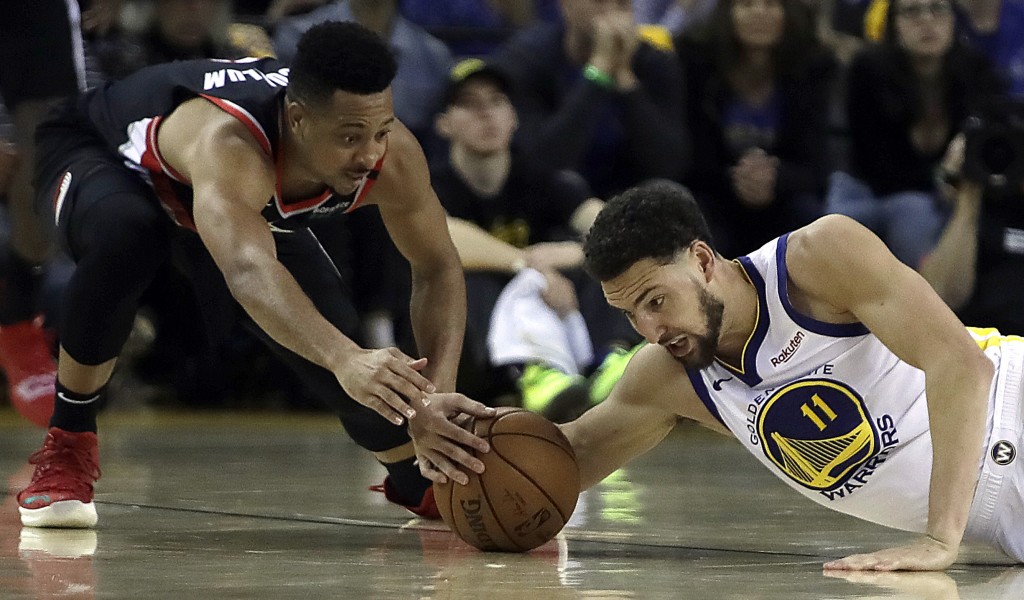 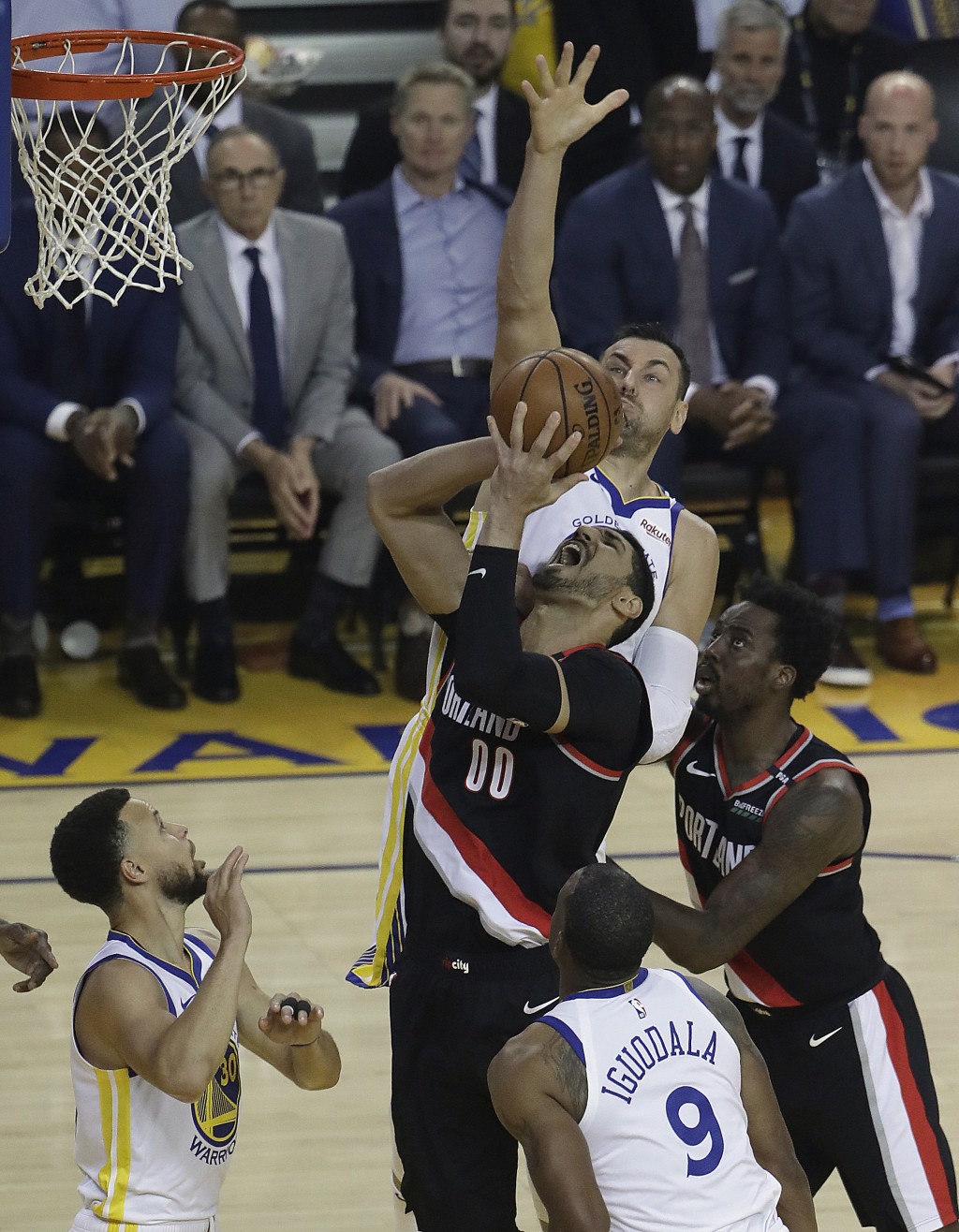 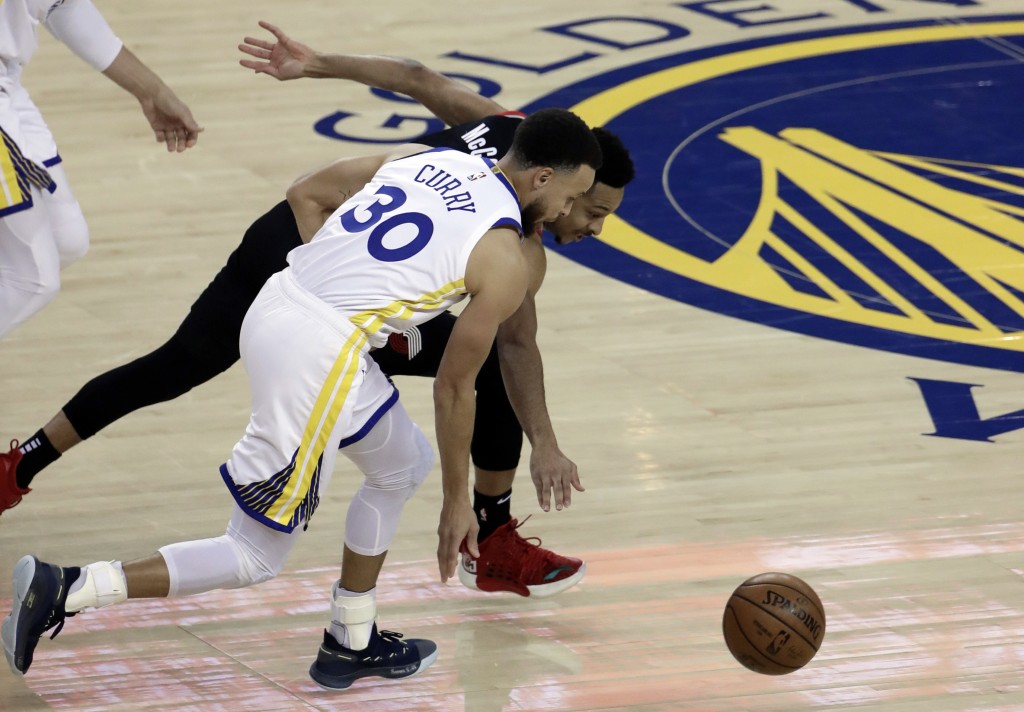 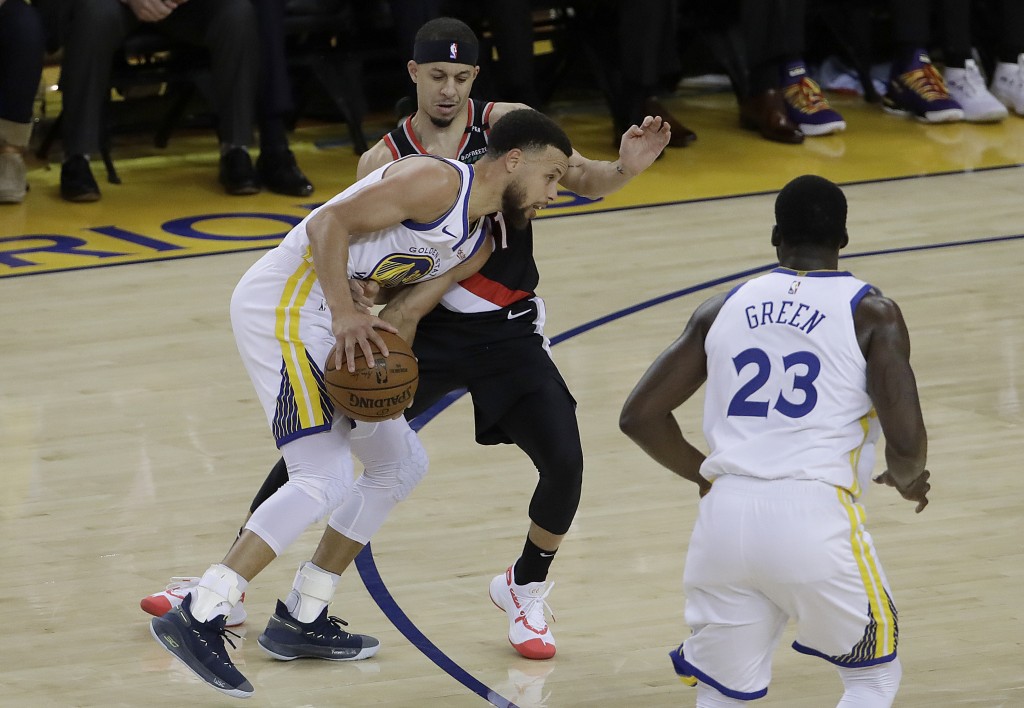 OAKLAND, Calif. (AP) — Stephen Curry made nine 3-pointers and scored 36 points, and the Golden State Warriors beat the Portland Trail Blazers 116-94 on Tuesday night in Game 1 of the Western Conference finals while playing without injured star Kevin Durant once again.

Curry shot 12 for 23 in his fourth 30-point performance this postseason, finding far more open looks than he had in the last round against Houston. The two-time NBA MVP outplayed the Portland duo of Damian Lillard and CJ McCollum, who combined to go 11 for 31 facing a strong Golden State defense.

Klay Thompson had 26 points, including a late one-handed slam. Draymond Green established the energy on both ends early for the well-rested Warriors and finished with 12 points, 10 rebounds, five assists, three blocks and two steals.

Lillard scored 19 points back home in Oakland, just miles away from where he grew up. McCollum had 17 and missed five of his six 3s as the cold-shooting Blazers went just 7 for 28 from long range.

Game 2 is Thursday night, and the Warriors are unlikely to have two-time reigning NBA Finals MVP Durant back from a strained right calf. An update on Durant's status is expected that day once he is re-examined.

Curry matched his postseason career high for 3s, also accomplished in Game 1 of last year's finals against Cleveland. He found his groove far earlier than in the Game 6 clincher at Houston on Friday night, when he scored all 33 of his points in the second half.

Lillard hit a game-winning 3-pointer with 6.3 seconds remaining in overtime Dec. 27 in his last regular-season game at Oracle Arena. He averaged 28.3 points and 6.5 assists in four regular-season games against Golden State this season.

He arrived for Game 1 in a custom Oakland Athletics baseball jersey having averaged 30 points in his nine previous playoff matchups against the Warriors.

The teams combined for 11 turnovers in the opening quarter.

Golden State began its fifth straight Western Conference finals, joining the Lakers are the only other team to do so.

The Warriors won their previous two postseason series with Portland, both over the past three seasons. They had a four-game sweep in the first round in 2017 during a remarkable 16-1 run to the title and a five-game Western Conference semifinal series the previous year.

"The Warriors were a special team that year that they swept us," Blazers coach Terry Stotts said.

Between warmup shots, Seth Curry stole a glance to the other end as his big brother went through his own pregame routine.

Back in the locker room, Stephen Curry said, "That was wild." Then, he joked, "Only me and Seth are going to score, the whole series."

Proud parents Sonya and Dell Curry had planned to flip a coin to determine who wore which gear for the games.

It turned out Dell Curry wore Steph's No. 30 on the front and Seth's No. 31 on back, while Sonya had Seth's number on her front and Steph's on the back.

The Currys became the first brothers to ever face off in a conference final and the first in any round since Marc Gasol for the Grizzlies against Pau Gasol and the Spurs in the first round of the 2017 playoffs.

The Blazers traveled straight to the Bay Area from Denver after winning Game 7 on Sunday rather than return to Portland.

"Denver seems like a week ago now," Stotts said. "NBA players are resilient, physically and mentally. I think everybody is prepared for it whether you've had days off or not had days off."

Trail Blazers: Portland committed four quick turnovers and finished with 21 to the Warriors' 14. ... G Rodney Hood, who suffered a bone bruise in his left knee Sunday against the Nuggets, scored 17 points. ... Portland is 1-9 all-time against Golden State in the playoffs.

Warriors: Golden State is 18-1 in Game 1 of a playoff series dating to the 2015 title run, having won the last 12 postseason openers. ... Former Warriors C JaVale McGee received a rousing ovation when introduced in the first quarter sitting along one baseline. ... The Warriors are 28-10 in the postseason with the starting lineup used Tuesday that included Andrew Bogut again starting in place of Durant, according to Elias.