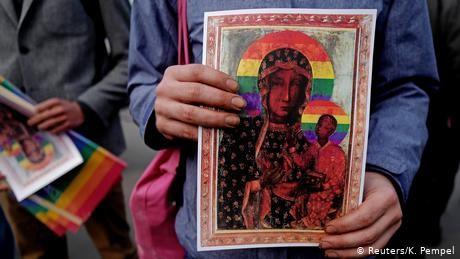 It is one of Poland's national treasures: Every year, millions make the pilgrimage to the see the Black Madonna, the famous icon of the Virgin Mary with baby Jesus inside a shrine of the Jasna Gora Monastery in the southern city of Czestochowa.

In late April, posters of the Black Madonna adorned with a rainbow-colored halo appeared in public in the town of Plock just north of Warsaw.

The posters hung on public toilets and trash cans near a church that had attracted criticism around Easter when small cardboard boxes listing words such as "betrayal," "greed" and "contempt" appeared next to a grave. Some cards also had"gender" and "LGBT" on them as well as the saying "protect us from the flames of faithlessness."

Podlesna was arrested, her apartment raided and her phone and computers were seized. The activist was then interrogated by police for hours.

Polish Interior Minister, Joachim Brudzinski, took to Twitter in praise of the police and condemned the "desecration of the image of Our Lady, which has been considered sacred by Poles for centuries."

Podlesna rejects the accusations. "This is not an attack at all. How can someone be attacked by a picture?" was a question she posed in an interview with a newspaper.

She said she felt like "criminal" when she was arrested and interrogated: olfactory samples and fingerprints were taken. When she was asked to remove her tights at the police station, she refused.

Amnesty International and the Warsaw-based Helsinki Foundation for Human Rights condemned the police's tough approach, saying that Podlesna's action was a "peaceful protest." Amnesty called on the Polish government to stop targeting people who are prepared to stand up for their opinions.

In Warsaw, hundreds protested against the activist's arrest. Shortly after the controversial police action, pictures of the rainbow madonna also appeared on government buildings such as the headquarters of the ruling nationalist-conservative Law and Justice party (PiS), the Justice Ministry and the prosecutor's office. Flyers were also distributed showing PiS leader Jaroslaw Kaczynski imposed on a rainbow background.

"The Catholic Church in Poland is omnipotent, it is a state within a state and is not subject to any rules," a young man told a Polish television station during a demonstration against Podlesna's treatment, adding that "the arrest of Elzbieta Podlesna is the result."

Many demonstrators know Elzbieta Podlesna well. For years, the 51-year-old has been active in the women's movement, and she also has close ties to Citizens of Poland (Obywatele RP), one of the most influential civic movements in the country.

Even before that, Podlesna was no stranger to protest: She discovered similarities in the authoritarian style of the PiS and the former Communist party, so she spray-painted their acronym on the window of the office of a PiS member.

The debate on the rainbow madonna has also divided Poland's Catholics. In an open letter to the Bishops' Conference, liberal Catholic intellectuals criticized the police response to the activist arguing that it is not the state's role to judge blasphemy, saying it was an instrumentalization of religious symbols — a point which the bishops tacitly accepted.

The open letter quoted Kaczynski's statement at an election campaign event, when he equated attacks against the Catholic Church as attacks against the whole of Poland; it argued that this was a "monopolization of the church and the country by a political party."

The church as an election topic

The dispute over the Rainbow Madonna is part of a much broader debate between liberals and conservatives, one that has been simmering for years but flares up during election campaigns, such as the upcoming European elections and domestic parliamentary elections.

Kaczynski defends Catholic values as part of Polish identity saying that the country's "morality" was inextricably linked to Catholicism.

"Anyone who looks at Polish history knows that there is no history of the Polish nation without the church," he said at one of the Poland's patriotic "family picnic" events.

For PiS supporters, who according to polls are the largest voter group, activists like Elzbieta Podlesna embody the liberal, progressive images of the enemy.

She is now subject to a criminal investigation because of her Rainbow Madonna protest. According to Polish law, she could receive a fine or even be sentenced to up to two years in prison for "publicly insulting religious feelings or desecrating a ritual object."