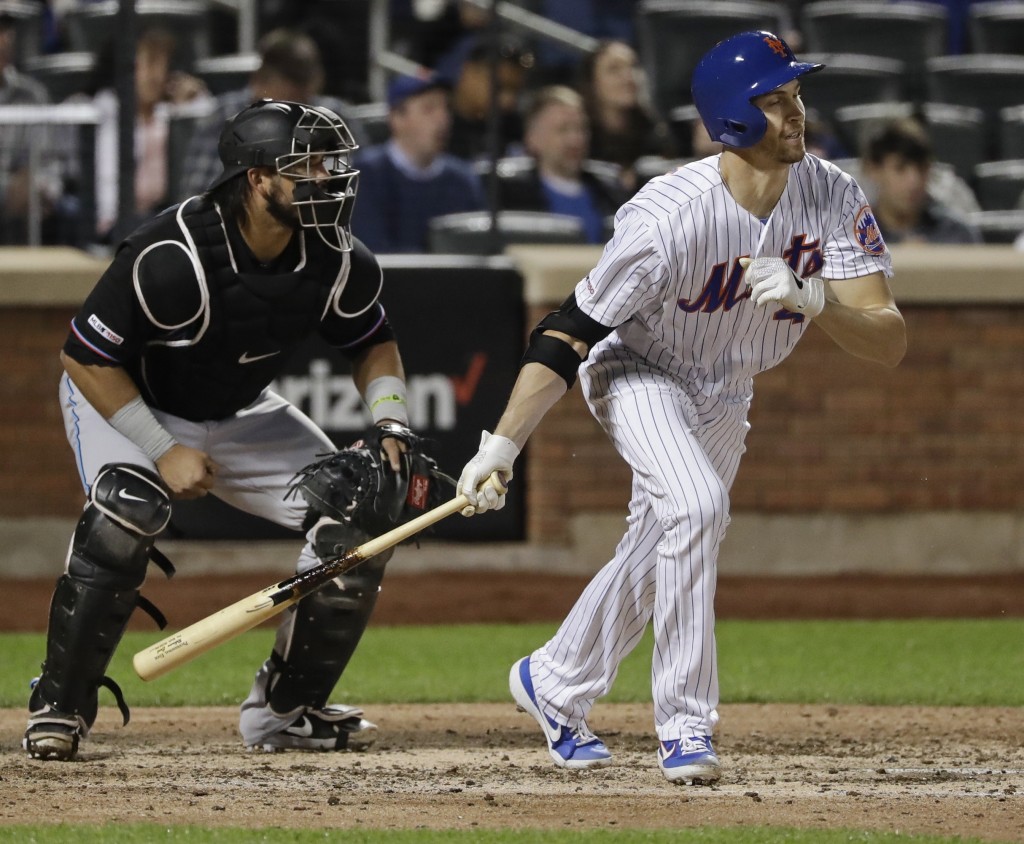 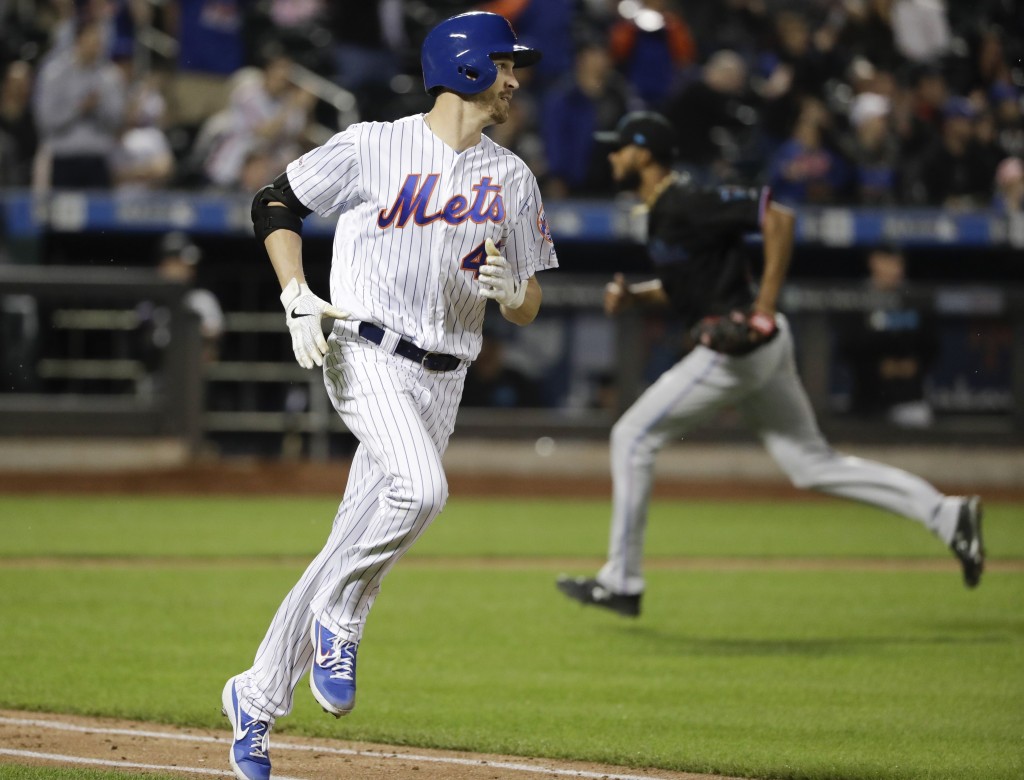 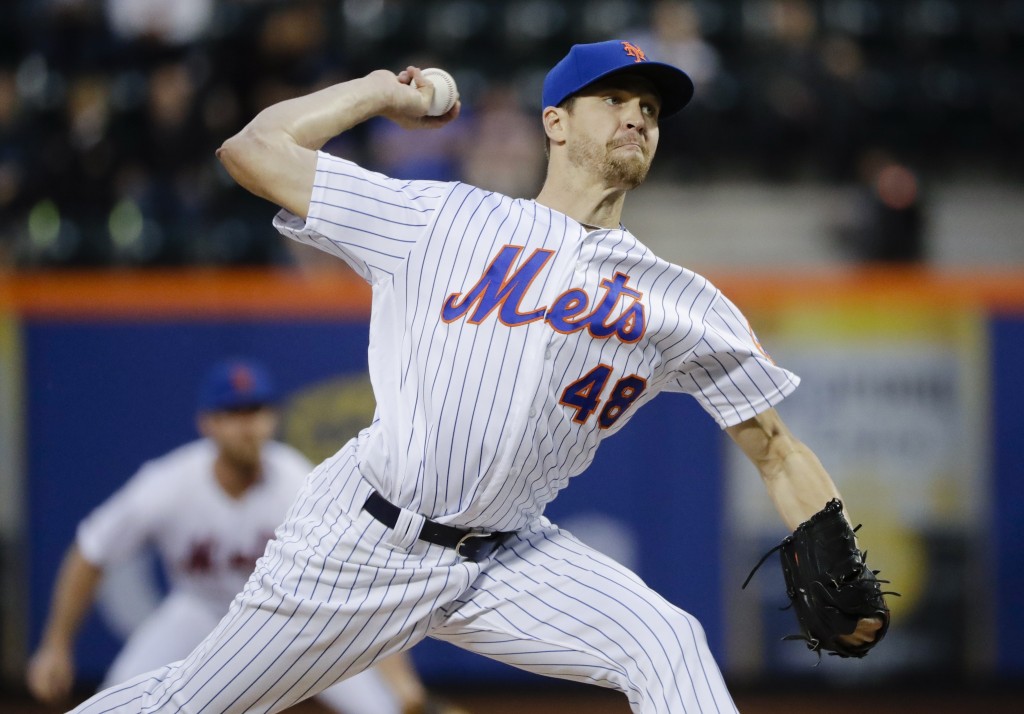 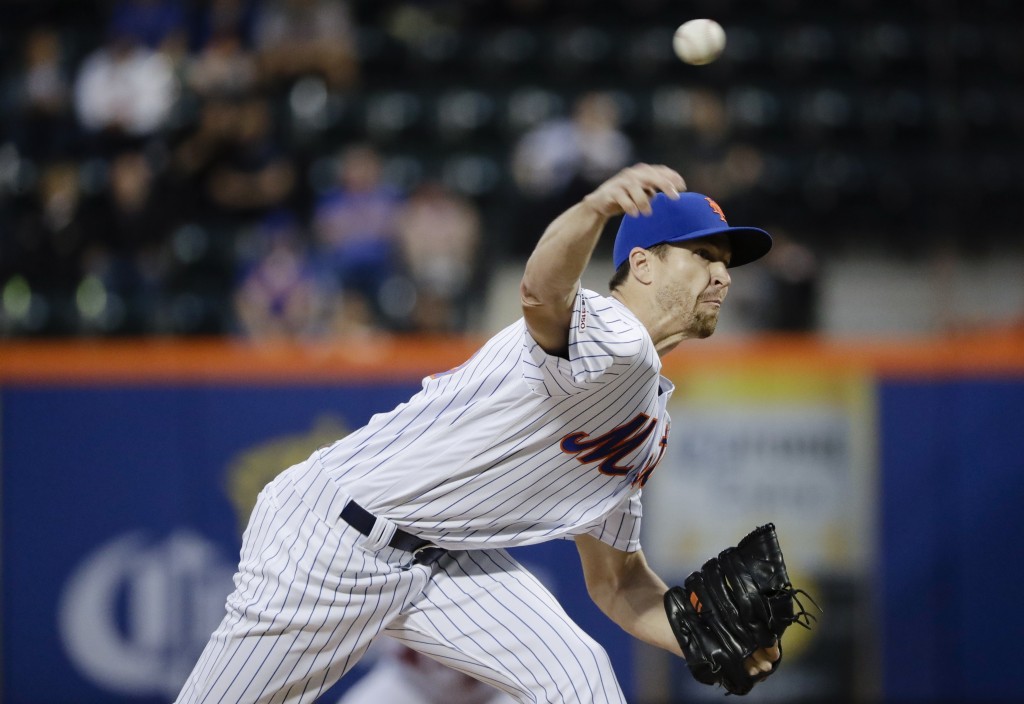 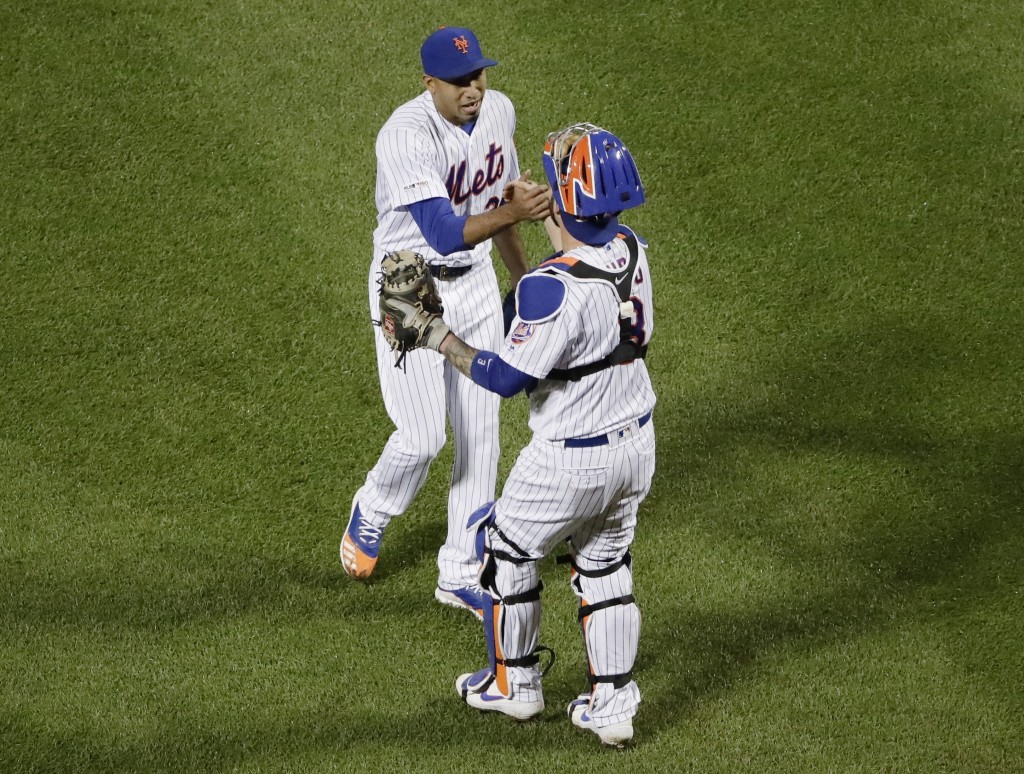 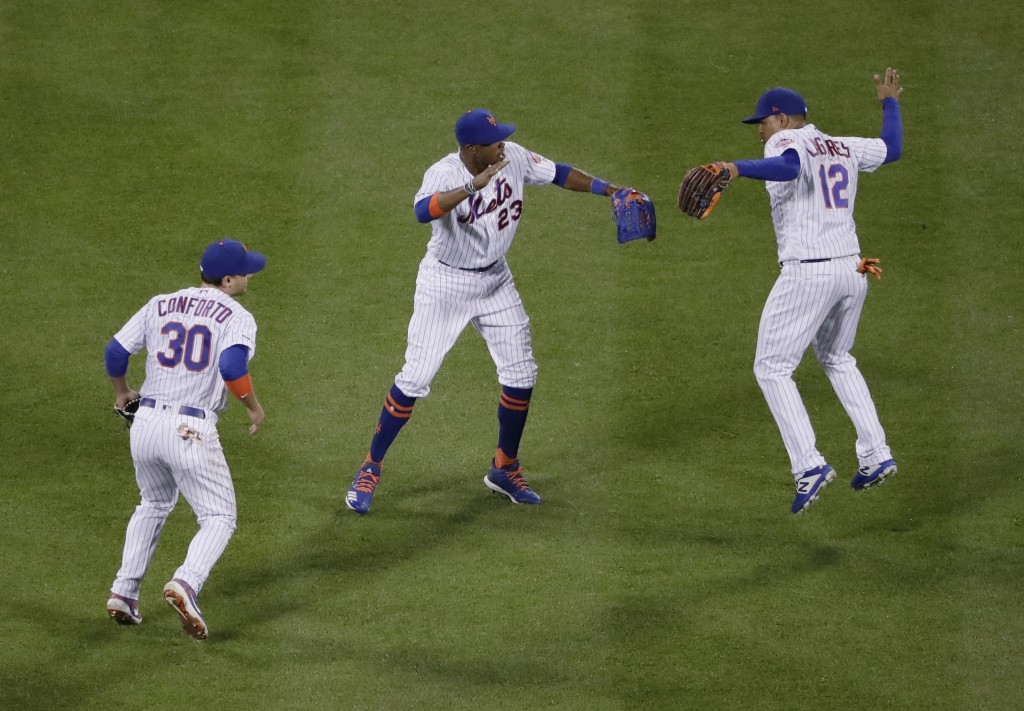 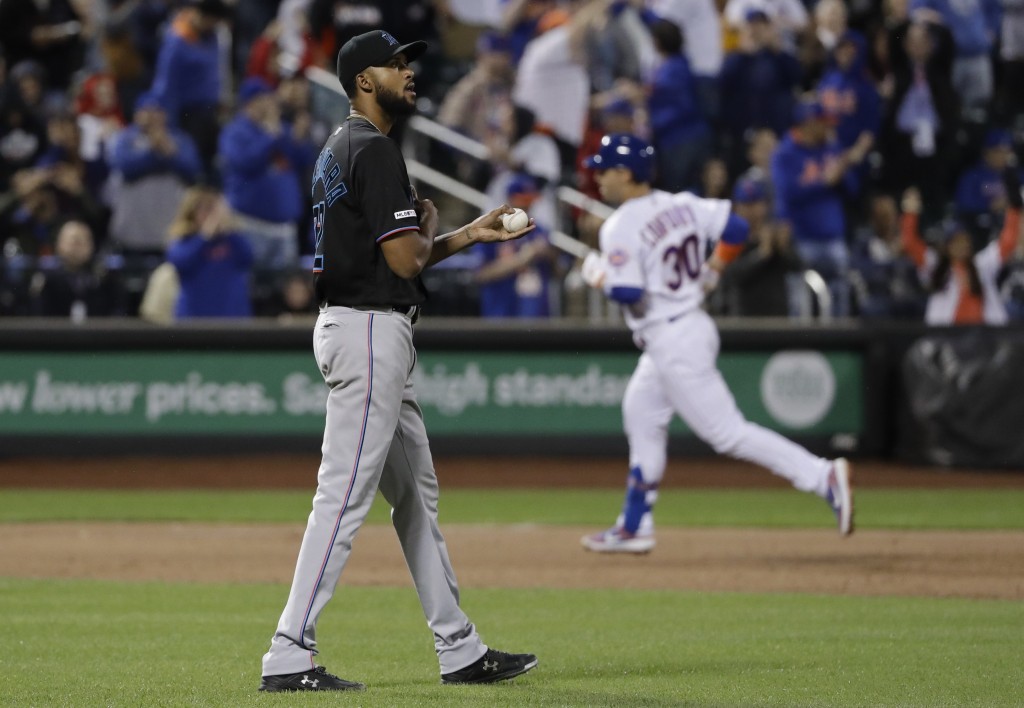 NEW YORK (AP) — Jacob deGrom ended a five-start winless streak, allowing one run over seven innings to win for the first time since April 3 and lead the New York Mets over the Miami Marlins 4-1 on Saturday night.

Pete Alonso and Michael Conforto hit back-to-back homers in a three-run sixth that included an RBI single by deGrom, his second hit of the night.

DeGrom (3-4) allowed five hits and one walk while striking out eight. He retired his seven batters, gave up consecutive doubles to Jon Berti and Sandy Alcantara, then set down 14 of his final 18 batters.

The reigning NL Cy Young Award winner had been 0-4 with a 5.33 ERA since winning at Washington and at Miami in his first two starts. He has allowed just three earned runs over 21 innings in his last three starts.

New York improved to 19-20 and is 5-0 this year against the Marlins. The Mets won for just the fifth time in 19 games when their opponent scored first, including the second time in nine games at home.

Conforto hit a tying single in the fourth against Alcantara (1-4), who allowed four runs, eight hits and two walks in 5 2/3 innings.

Alonso hit his 12th homer this season on a slider with one out in the sixth and Conforto went deep four pitches later, his eighth home run this season. They were the second back-to-back homers this year for the Mets; Alonso and Robinson Canó did it against the Nationals on April 6.

Seth Lugo pitched a perfect eighth. Edwin Díaz walked Jorge Alfaro with two outs in the ninth, then gave up an infield single to Harold Ramirez, who went 1 for 4 in his major league debut. Díaz retired Berti on a lineout to convert his 20th straight save chance and 10th this season.

Berti had a pair of doubles for the Marlins and drove in his second run this season.

Miami recalled RHP Elieser Hernández from Triple-A New Orleans and selected the contract of Ramirez from the Triple-A farm team. LHP José Quijada, who threw a career-high three innings of relief in Friday's 11-2 loss, was optioned to the Baby Cakes along with OF Isaac Galloway, who was hitting just .167 with 17 strikeouts and no walks in 54 at-bats.

Marlins: RHP Drew Steckenrider was transferred to the 60-day IL after he was diagnosed with a right forearm flexor strain. He is scheduled to visit Dr. James Andrews next week for a second opinion. ... INF/OF Garrett Cooper (bruised left hand) was activated from the 10-day IL and OF Peter O'Brien (bruised left rib) was placed on the 10-day IL, retroactive to Friday.

Mets: LHP Justin Wilson (left elbow) was placed on the 10-day IL for the second time this season. Wilson pitched just once since being activated Tuesday. RHP Eric Hanhold was recalled from Triple-A Syracuse. ... INF Jed Lowrie (left knee) went 0-for-4 for Triple-A Syracuse. He is 5 for 31 in eight injury rehabilitation games with Syracuse and Class A St. Lucie.

RHP Noah Syndergaard (2-3, 5.14 ERA) pitches at home Sunday for the first time since May 2, when he threw a four-hit shutout and homered in a 1-0 win over Cincinnati. Marlins LHP Caleb Smith (3-0, 2.11 ERA) starts after becoming the first Marlins pitcher to win his first three decisions since the late José Fernández was 6-0 opening 2015.