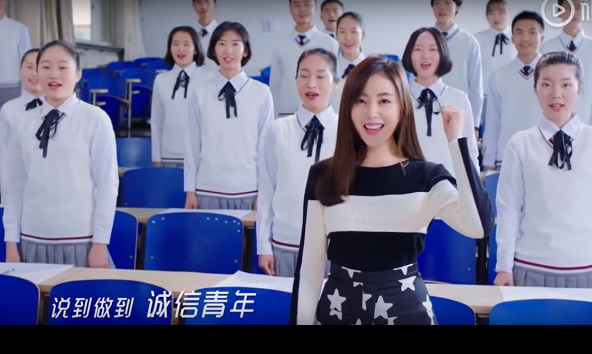 TAIPEI (Taiwan News) – The Chinese Communist Party’s (CCP) Youth League recently sponsored a music video by the mando-pop group, TFBOYS (The Fighting Boys), and several other Chinese pop stars to not-so-subtly promote the country’s Social Credit System which is rapidly being implemented across the country.

The song from the Communist Youth League, entitled“Live up to your word” (說到做到) seems to be an anthem extolling proper conduct for China’s youth in modern society, with a clear emphasis on “being honest” and “doing the right thing.”

However, critical observers of the music video will notice an emphasis on smartphones and smart technologies throughout the production. The video shows the singers in various situations which involve use of their smart phones or computers, like shopping in an automated supermarket, renting public bikes for transport, and making "honest" business deals.

At one point in the video in a public reading area of a library, the video shows a sign which reads “Common Reading (area), Honestly Borrow and Return” (共享閱讀, 誠信借還) above the slightly incongruous English “Honesty and Credit,” a message which might suggest something more than the reading of books in a library.

One potential aspect of China’s emerging social credit system is reportedly to make citizen’s financial debt viewable to the public at large, by alerting people through smart devices when one is near a“deadbeat debtor.”

Despite the seemingly positive message of the Communist Youth League’s mandopop song, the imagery in the video borders on the absurd, with the forced smiles of the actors giving the performance a somewhat Orwellian feeling.

The lyrics of the song encourage young listeners to make “pledges” or “oaths,” presumably to live a life without privacy before the all-seeing eye of the state. Such a lifestyle of obedience is celebrated by the song with the euphemistic lyrics about living a life of“sincerity” or “integrity.”

The goal of China’s Social Credit System is ultimately to create a population of docile citizens, whose entire life is monitored by the state. The video’s message of “being honest” is actually a plea for citizens to allow constant state supervision of an individual’s actions.

The Weibo page which has been promoting the song under the slogan #IntegrityLightsUpChina, has the description "Youth should be trustworthy, creditability is valuable, every aspect of life contains the concept of integrity," reports ABC.

In has been recognized that China’s proposed full spectrum surveillance and evaluation of its citizens via modern technologies is a rapidly expanding tool of oppression meant to ensure the CCP’s continued dominance over Chinese society.

Since the video was uploaded to Weibo in April it has been viewed over 340 million times, according to ABC.

According to recent reports, the CCP hopes to implement the social credit system throughout China by late 2020.