TAIPEI (Taiwan News) – Mark Yeh (葉文宏), board director of charity managing company Agoood, believes that, “The best kind of charity creates values and provides services instead of just soliciting donations or selling unneeded items on the street and asking for sympathy and compassion.”

He also thinks that many people who have physical or mental disabilities are more talented than they are generally given credit for and this talent should be developed and put into work to create value. “People with disabilities can create drawings that are so childish, imaginative, and cute that they can blow your mind.”

Instead of selling items on the street that aren’t really needed, such as chewing gum, tissues, or ballpoint pens, Agoood wants to tap into the talent pool of the underprivileged. One way of doing this is getting them to draw or design with the guidance of professional artists or designers, and then make visual art designs from their works.

These designs can then be used on a variety of products, such as souvenirs, carrier bags, T-shirts, posters, campaign logos, and even decorate public spaces, Yeh said.

Drawings by clients of a charity organization, including children with Down's syndrome, have under the company’s guidance been exhibited at the World Design Capital Taipei 2016. They have also been used to decorate a public space at Taipei MRT’s Sun Yat-Sen Memorial Hall Station, Yeh said.

Some of their works were also used for designs at the Taipei 2017 Summer Universiade, such as for mascots, logos, and posters. These designs exhibited their great talent, Yeh said, adding that each child is like a secret Pablo Picasso.

Engaging children with disabilities in creative activities, such as drawing, also serves recreational and educational purposes, just like art therapy lessons, he added.

Based on the principle that “charity should be integrated into everyday life,” Agoood has also rolled out the innovative City Service Car, which is a multi-purpose vehicle designed for selling goods, broadcasting sponsors’ advertisements, and using solar panels for power supply. The vehicle allows people with disabilities to earn and manage their own lives and narrow the gap between them and the general public, the company said.

City Service Car is part of an integrated social design project called “Gifted City,” which involves designers and people with disabilities, according to the company. Designers create living products with people who have disabilities.

The people with disabilities then ride the City Service Car on the streets to market products while providing street services, such as WiFi connection, battery charging, and umbrella lending.

Yeh said revenues generated from broadcasting advertisements, product orders and sales, as well as donations, will be distributed among the designers, people with disabilities, the factories manufacturing the products, and the company.

By participating in creation, providing services, and marketing products, people with disabilities can create values for themselves and others, while accomplishing self-realization, Yeh believes.

For tapping into the potential of people with disabilities and creating City Service Car, under the Gifted City project, Agoood won the 2019 Asia Pacific Social Innovation Partnership Award (APSIPA). 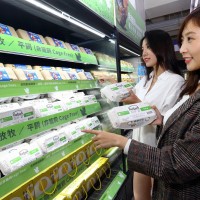 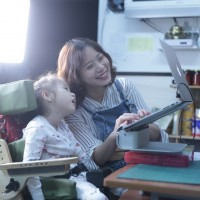 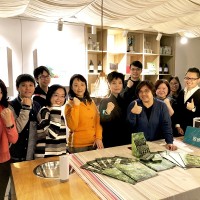