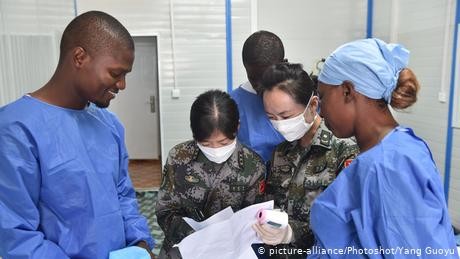 For a long time, China was seen as a foreign aid recipient rather than a donor.

It was only in 2007 that China started contributing to the International Development Association, the lending arm of the World Bank, and has since steadily increased its aid to developing countries, especially those in East Asia.

Although, if you were a member of the older generation in China you might remember the period under Mao Zedong when Beijing, despite economic difficulties, was so generous with foreign aid that it was thought the government would rather feed the "brother countries" (fraternal states) than prevent its own people from starving.

This is because aid has always been a key tool in China's foreign policy, serving primarily as a gambit to win political support.

Having experienced phenomenal economic reform in the post-Mao era, Beijing has built strong relationships with developing economies, continuing to provide aid in a bid "to promote South-South cooperation."

According to the white paper issued by the Chinese State Council at the end of 2016, China has given around 400 billion yuan ($58 billion, €47.4 billion) in development aid to 166 countries and international organizations over the past six decades.

But as China's wealth and influence grows, its development policy is becoming increasingly motivated by a desire to gain access to new markets and economic returns.

One major finding of this study was that the majority of Chinese foreign aid was not in the form of "traditional aid" — direct grants — but rather intended for commercial projects and loans that were required to be repaid with interest.

"China's aid is only a very small part of what it considers to be development engagement, which often simply means doing business deals," Matt Ferchen, a scholar from the Carnegie-Tsinghua Centre for Global Policy in China, told DW.

According to Ferchen, this is because while "aid" in the West is most commonly understood as a grant or a low interest loan, it is a much more flexible concept in China, which considers "trade, investment and finance" all part of its "development assistance" across the globe.

Beijing has always claimed that China's assistance to the developing world is premised on "equality between partners and mutual benefits," with no political strings attached.

Chinese leaders have repeatedly said that China does not place the same kind of conditions that the Western world does on the money it grants, or lends, to countries in need. It does not require, for example, the recipient country to uphold certain standards of governance, as is often the case with aid from the United States.

For countries with weak rule of law, Chinese investments "have advantages," said Ferchen.

Many leaders of recipient countries have spoken highly of the world's second-largest economy, calling Beijing "a reliable friend." In 2015, then-President of Zimbabwe Robert Mugabe compared China with the West after signing ten economic agreements with China, saying: "Here is a man [Xi Jinping] representing a country once called poor, a country which never was our colonizer. He is doing to us what we expected those who colonized us yesterday to do."

Whether this kind of relationship is sustainable in the long run is highly questionable, Ferchen told DW. "What China's banks and companies are starting to run into is that if they ignore governance standards, then down the road it might make it difficult for their African, Latin American or Asian recipients to be able to sustain the relationship, to pay back the debts and to be able to continue to do business," he said.

Aid a gateway to greater influence

From ports in Sri Lanka to a railway in Kenya, projects funded by China are numerous across the globe. Since its economic reform, China has become one of the world's biggest cross-border investors and largest infrastructure financiers.

Traditional Western donors are generally skeptical about China's aid-giving, questioning its true purpose and implications. Some analysts, especially in Africa, also argue that many China-funded projects are not particularly beneficial for local people, and are merely a way for China to access a country's market and resources.

Patrick Bond, professor of political economy at the University of the Witwatersrand Wits School of Governance in South Africa, is "very critical" of China's foreign investment and aid. He told DW that "the conditions on Chinese loans and investments become very clear when the recipient countries have a debt crisis."

China is increasingly enforcing ownership as a condition in the instance the recipient country cannot pay the loans, Bond said. He uses the example of Sri Lanka, where the Chinese-built Hambantota maritime port was formally handed over to China on a 99-year lease in late 2017 because the Sri Lankan government could not afford to maintain it. Government critics have claimed China's ownership over the port compromises the country's sovereignty.

Bond also references a multibillion dollar Chinese-funded railroad from Mombasa to Nairobi in Kenya, which the World Bank has predicted is unlikely to make enough money to repay the debts, and Chinese-backed mining in debt-riddled Zambia, where violent labor disputes have broken out between local workers and their Chinese employers.

Other studies by the researchers at AidData show that politics play a big role in how China decides to spend its money, indicating that Chinese development projects tend to be concentrated in areas where African leaders and politicians live, as opposed to marginalized regions.

A review from the US-based thinktank, the Brookings Institution, discovered China tended to spend more money in corrupt countries, with a negative correlation between the Chinese government's direct investments and the World Bank's Rule of Law index.

According to Bond, because of this, China's investment is sometimes associated with "extreme exploitation, extreme corruption, and leads to interference in political affairs."

"We know that last November there was a coup against Robert Mugabe. The new president is Emmerson Mnangagwa, and we know that the man who helped Mnangagwa become president is now the vice-president, Constantino Chiwenga, who went to China essentially to get permission for the coup the week before.

"We know that Emmerson Mnangagwa signed deals with the Chinese military and Chinese companies to exploit diamonds, and we know that some $13 billion (€10.6 billion) of diamonds went missing," Bond told DW.

China's foreign aid may come with little conditionality regarding the recipient countries' governance practices, but it is not devoid of political purpose.