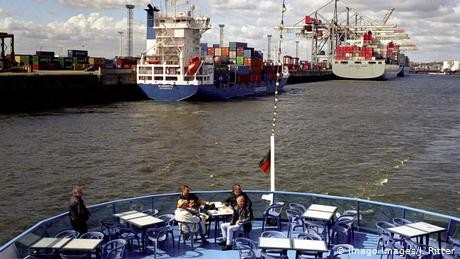 Europe's border-control free single market currently generates €420 billion annually or €840 per resident. That amounts to 2.5% of the whole EU's gross domestic product. But that gain is spread unevenly, according to a study released Wednesday by Germany's Bertelsmann foundation.

Examining individual incomes in 300 regions across Europe, its researchers mapped as major gainers residents in Germany's Hamburg and Munich regions as well as Europe's smaller "core" exporters such the Netherlands, Austria and Belgium

The per capita average gains in Oberbayern (region around Munich) and the Hamburg area were €1,489 and €1,478 respectively. The figure for Germany as a whole was €1,046, putting it in the top 10 overall.

But the country also has a strong west-to-east disparity: The gains for the eastern German regional states Brandenburg and Mecklenburg-West Pomerania were only €672 and €700 per person.

Zurich in non-EU Switzerland and Brexit-affected London had per capita gains of €3590 and €2,700 respectively, meaning that "some of the biggest winners" were those outside or "could be leaving the EU," said Bertelmann economist Dominic Ponattu.

It was not the largest economies that benefitted the most, but "above all relatively small but strong exporting nations" and regions within the EU's 28-member single market and the wider European Economic Area that includes Norway.

Across southern Europe, single market-income gains were lower, "partly because competitiveness lags behind," said the study's authors, citing Spain at €590, Portugal at €500 and Greece €400 per person.

The lowest Single Market gains were in Bulgaria, Romania (the current EU host nation) and Greece — spread between €150 to a maximum of €500 — where the EU ran "significant" programs to boost infrastructure.

Methodologically, the researchers, including University of Sussex economist Giordano Mion, compared Europe's status quo with a simulated scenario based on an assumed abolition of the single market.

Ponattu and Mion urged wider application of EU rules and common standards so that in particular service-industry firms and workers gained fairly across Europe.

Although services generated about 75% of value added in Europe, only 30% of those services were actually exported EU-wide, they concluded.

The single market, launched in 1993 and anchored in EU treaties, proscribes the free movement of labor, goods, services, and capital, including the freedom to choose place of residency.

That was followed in 1999 by the single European currency, the euro, currently used by 19 of the EU's 28 member states. Those outside include Britain, Poland and the Czech Republic.