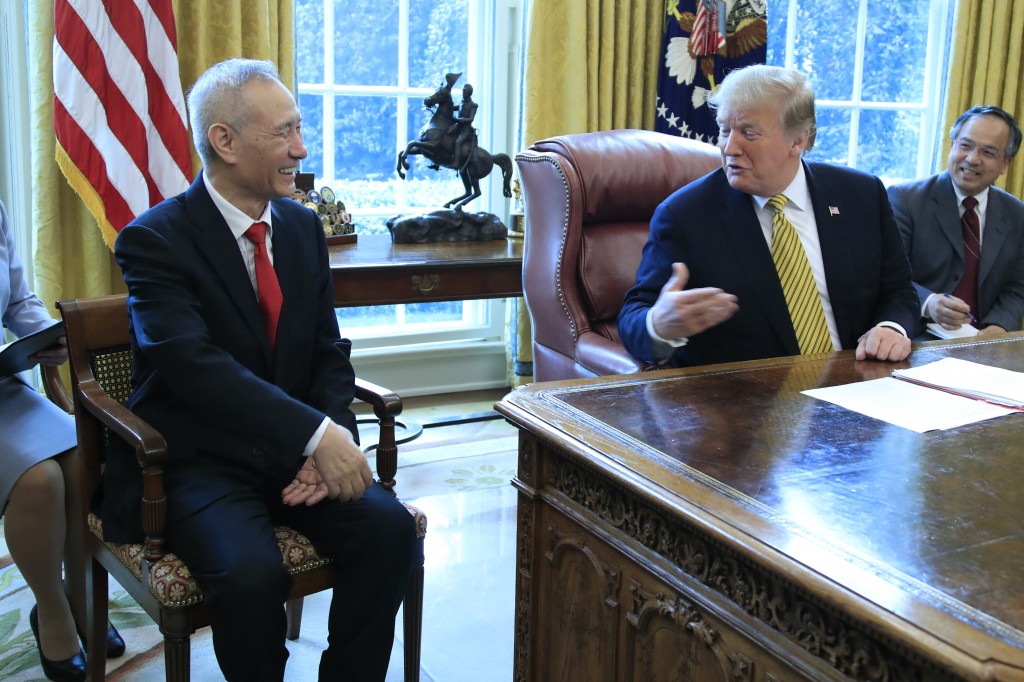 WASHINGTON (AP) — As he cranks up the pressure on China in pursuit of a new trade accord, President Donald Trump is putting his deal-making persona on the line and injecting new risk into his bid for another four years in the White House.

Trump has raised the already-high stakes of this week's talks between U.S. and Chinese negotiators as he seeks to seal an agreement he can brandish on the campaign trail. The push to bring the talks with China to a conclusion comes as his administration gears up for a difficult fight in Congress over its new North American trade deal. Progress or failure on the twin agenda items stands to be a key selling-point for his re-election, or a sobering verdict on his unpredictable stylings.

Trump made protecting American manufacturers and farmers central planks of his 2016 candidacy, and his pledge to reverse the tide of globalization helped him win over voters in Democratic-leaning states like Michigan and Wisconsin. Now those groups Trump vowed to help are sounding the alarm about the impact of Trump's protectionist measures on imports from China and other trading partners.

Despite Trump's rhetoric to the contrary, tariffs are paid by U.S. importers of foreign goods. Manufacturers dependent on foreign material, retailers and other importers have been charged more than $15 billion in the last year, according to federal data — though the impact directly felt by consumers has been relatively minimal.

Dave Salmonsen, a senior director at the American Farm Bureau Federation, said the group is hopeful that the president's threat of increased tariffs on Friday "is just part of the negotiating process." He said that agriculture exports to China fell by more than half last year from $21 billion in 2017. "They've retaliated on almost everything we send," he said.

Throw in retaliatory tariffs from Canada, Mexico and other nations, and the trade war contributed to a projected 16 percent decrease in farm income last year, according to a recent study from the Agriculture Department. The Trump administration ended up providing up to $12 billion in aid to farmers affected by the trade skirmishes.

Some Republican senators voiced concerns about the state of trade negotiations during a private lunch Tuesday with Vice President Mike Pence.

"We're not in a good way at all," said Sen. Pat Roberts of Kansas, chairman of the Agriculture Committee.

"There's a lot of feeling in ag country that we're being used as pawns in this whole business," Roberts said, but added: "We will benefit tremendously if we get a good deal, so we're hanging in there with the president."

The vice president encouraged the senators to stick with Trump as he pushes China for a better deal.

Despite the political fallout back home, senators seemed intent on not breaking ranks with the White House at this crucial moment in the trade talks.

"Even though there's some real issues in Wisconsin, there's a great deal of support for what he's trying to accomplish," said Sen. Ron Johnson, R-Wis. "I don't think anybody wants to undermine his negotiating position right now, and we're all keeping our fingers crossed."

Current and former Trump administration officials believe the U.S. still has the most leverage in the talks, saying China needs access to the U.S. market more than the reverse. And even if the talks don't succeed for Trump, their hope is that voters are more likely to blame any pain on China, rather than the president.

Former Trump strategist Stephen Bannon wrote in The Washington Post that the president's best political option is "not to surrender, but rather to double down on the tariffs — they have been highly effective in pressuring the Chinese without harming the U.S. economy."

"Certain Trump advisers inside and outside the White House are playing on the president's well-earned pride in a rising stock market and a fear he might lose the Farm Belt to try to box him into a weak deal. But it is a decidedly false narrative that any failure to reach a deal will lead to a market meltdown and economic implosion," Bannon wrote.

And there are indications that at least some Trump supporters are all for the president's confrontation.

"Right now, because we have a strong economy and China has some issues with its aging population and a slowing economy, we're in a position of strength to negotiate a better deal," said Jeff Schulmeister, 52, a resident of the Detroit suburb of Macomb Township. "I think what he's doing is the right thing to do, and I think it's going to benefit the country."

Trump will be traveling to Japan later this month after raising hopes for a new trade deal with Prime Minister Shinzo Abe. Meanwhile, his trade team is working to address concerns from Democratic lawmakers about a new trade agreement with Canada and Mexico. Democrats have said they want to make changes to the agreement before holding a vote to approve it. They want to take on protections for pharmaceutical companies, enhance labor protections and address concerns over enforcement.

Associated Press writers Jeff Karoub in Detroit and Lisa Mascaro in Washington contributed to this report.