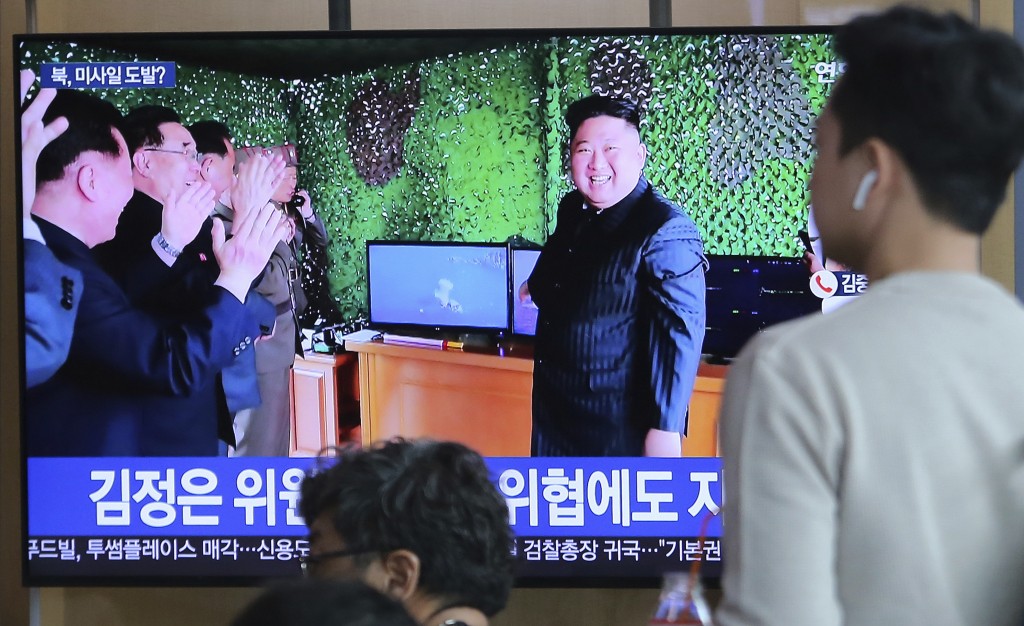 TOKYO (AP) — North Korea appears to have tested a new short-range missile — and President Donald Trump's resolve to keep it from doing more of the same in the future.

The test early Saturday was quickly played down by Trump and his top advisers, who noted it was not the kind of long-range missile leader Kim Jong Un has refrained from launching since 2017.

But the sudden activity on the North's east coast, complete with fiery photos of a purported bull's eye out to sea, alarmed Washington's regional allies and suggests that Kim's missiles are improving even as the Trump administration wrestles with how to get him back to the negotiating table.

Kim personally supervised the test of what experts believe was a short-range ballistic missile first displayed by the North at a military parade early last year, along with a drill involving 240 millimeter- and 300 millimeter-caliber multiple rocket launchers.

There remains some uncertainty over what was tested.

South Korea's military reported that various "projectiles" flew from 70 to 240 kilometers (44 to 149 miles) before splashing harmlessly into the Pacific. The activity prompted the 35th Fighter Wing at Misawa Air Base in northern Japan to tweet on its official account — in all capital letters — "MISSILE INBOUND."

The tweet was soon followed by an all clear, and an "enjoy your Saturday."

Trump moved quickly to minimize the significance of the test on his efforts to strike a nuclear deal with North Korea, tweeting that Kim "knows that I am with him & does not want to break his promise to me."

Both leaders continue to claim they have a good personal relationship.

But tensions have grown since they failed to make any deals during their most recent summit, in Hanoi in February. Kim and senior North Korean officials have since expressed open frustration with what Pyongyang claims is an inflexible and unrealistic posture at talks by Secretary of State Mike Pompeo and National Security Adviser John Bolton.

Kim suggested last month that he intends to give Washington until the end of the year to change its negotiating strategy. If it doesn't, he has warned, he will seek a different path.

His position has created a dilemma for South Korean President Moon Jae-in, who has tried to act as a middleman. Seoul called an emergency meeting Saturday of top officials at its presidential Blue House and urged North Korea to stop committing acts that would raise military tensions.

But such calls ring hollow in Pyongyang since the South has decided to go ahead with joint military exercises with the U.S. that Pyongyang sees as provocative. The North strongly condemned a drill of a South Korea-based THAAD air-defense system by U.S. troops just two weeks ago.

The North's missile test also came just days after the United States tested its Minuteman III intercontinental ballistic missile from Vandenberg Air Base in California. Though such launches are planned well in advance and not directed at any specific country, they are seen by North Korea as highly provocative.

North Korea last conducted a major missile test in November 2017 when it flight-tested an intercontinental ballistic missile that demonstrated the potential capability to reach deep into the U.S. mainland.

During the diplomacy that followed those weapons tests, Kim said the North would not test nuclear devices or ICBMs. The latest missile, which the North's media referred to only as a "tactical guided weapon," fell well below that threshold.

It is believed to be modeled after Russia's 9K720 Iskander mobile short-range ballistic missile system. The solid-fuel missile, first revealed in a military parade in Pyongyang in February last year, is designed to be maneuverable during flight to boost its accuracy and thwart interception.

Experts noted that despite its physical resemblance, the North Korean missile may be a less capable version of the Russian Iskander, which can carry a nuclear warhead and strike targets as far away as 500 kilometers (310 miles).

A less capable version is still a clear danger to U.S. allies and American troops stationed in the region.

The distance between Wonsan, where the launch was held, and the South Korean capital of Seoul is roughly 200 kilometers (124 miles). More than 20,000 U.S. troops are based in the South and another 50,000 in Japan. All are within range of the North's short- or medium-range missile arsenal.

North Korea's state-run media had a propaganda heyday with the launch.

The ruling party newspaper showed Kim supervising the drill from a camouflaged tent with a desk and computer screens monitoring a rocky offshore outcropping that was used as a target. One photo has him smiling broadly while a screen shows the top of the crag enveloped in a ball of flames.

It also showed the missile rising from a mobile launcher and stressed how the drill was "organized without an advance notice" to underscore the need for realistic combat readiness.

North Korea's coverage of the developments over the past year presents a sharp contrast to the focus outside of the country on denuclearization.

The North's media has centered its attention on the portrayal of Kim as a strong leader on the global stage seeking to free the country of what the North calls unjustified sanctions so that it can develop its economy. Denuclearization is almost never the main topic of its reports.

That was the official message yet again on Sunday.

In its report on the drills, the state media stressed the need for the military to be on high alert to "defend the political sovereignty and economic self-sustenance of the country ... bearing in mind the iron truth that genuine peace and security are ensured and guaranteed only by powerful strength."