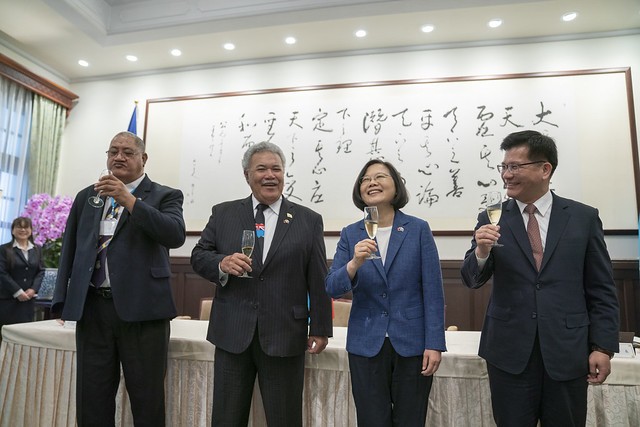 TAIPEI (Taiwan News) — Upon meeting with Prime Minister of Tuvalu, Enele Sosene Sopoaga, at the Presidential Office on Friday (April 3), President Tsai Ing-wen announced that the Taiwan government will launch a program to help Tuvalu and other Pacific ally nations foster their talent in tech industries.

From April 30 to May 5, the Tuvalu Prime Minister is leading a delegation of 24 officials and family members on his 16th visit made to Taiwan during his time as leader.

According to a press statement issued by the Presidential Office on Friday, President Tsai said Taiwan will launch a cooperative program with Tuvalu and other allies called the Taiwan Digital Opportunity Center (TDOC).

The program will “enlarge the interactions and exchanges between Taiwan and Tuvalu, and help Tuvalu foster the technology talent of next generations,” said Tsai during her meeting with Sopoaga.

Sopoaga welcomed Tsai’s proposal about the digital center. He hopes to make progress in his country’s development of digital opportunity and governance with the assistance of Taiwan.

The prime minister said the friendship extended by Taiwan is very crucial to Tuvalu, Central News Agency reported. He hopes the two nations will continue strengthening this friendship, the report said.

This year marked the 40th anniversary of the diplomatic ties between Taiwan and the Pacific island state. With a population of 11,000, Tuvalu is one of the six countries in the Pacific that diplomatically recognize Taiwan instead of China.

It’s neighboring country, the Solomon Islands, was recently reported to be considering breaking ties with Taiwan after the country elected its new prime minister, Manasseh Sogavare, in late March.

Taiwan’s Ministry of Foreign Affairs (MOFA) said on Thursday (April 2) via a statement that the relationship between Taiwan and the Solomon Islands “grows steadily.”